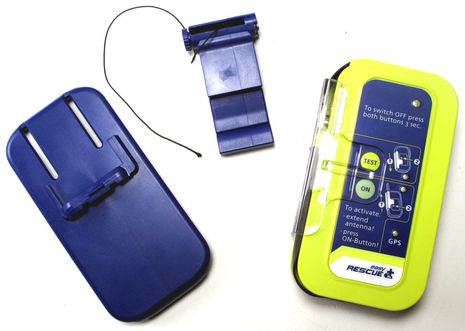 After the Miami show this year I wrote about the introduction of Kannad and McMurdo personal-size AIS SARTs meant for crew overboard rescues and/or to help you get found in a liferaft. The idea is that these 1 watt AIS transmitters can be seen and homed-in to from at least a few miles away by any vessel — including your own — with an AIS plotting device. (Antenna height can increase that range a good deal, and that even includes satellites!)  The first AIS SART I’ve gotten to test is the easyRescue A040 developed by the German company Weatherdock. It’s a brick-shaped device about 5 x 3 x 1 inches and it includes an optional back plate/belt clip and even a reel of thin line so you can leash it to your life jacket…

It turns out that the easyAIS — and maybe this is true of all AIS SARTs — is essentially designed for one-time use, like an EPIRB or PLB. That spring-loaded clear plastic button protector seen above is designed so that you can easily access the “Test” button, but to turn the unit “On” you have to push the protector up hard enough to break off that little red stopper seen in the photo below. The idea is to prevent false alarms, and also that you’ll send the unit in for a new lithium battery after actually using it. 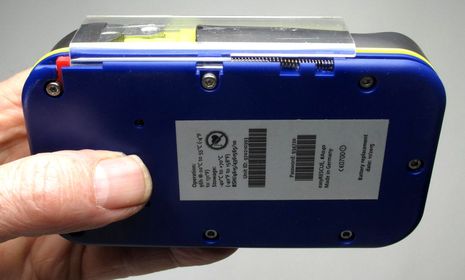 If you click on the photo for a larger version, you’ll see that the battery is rated to stay good until 11/2015, quite like a PLB battery, and the manual (which you can download on the product page) say that it’s good for 96 hours of use. You’ll also see a unique Unit ID and Password printed on the back of the easyAIS. These can be used to access a database of owner information that Weatherdock maintains and shares with SAR authorities. This is completely optional as AIS SARTs are designed to be standalone and ready-to-use right out of the box, but I did fill in my contact info — which was fairly easy, though partly thanks to Google Translate — on the theory that if I do get into trouble the more information the authorities have about me the better.
At any rate, when I tried the Test function, the easyAIS indicated that its battery was fine and that it had acquired a GPS lock in about a minute, which is pretty good, especially given that it was on the fender of my truck with a fairly limited sky view.  However, the test function did not include an AIS transmission, which has me a little confused as I thought a test SART message was designed into the system. But maybe that’s a feature that’s yet to be enabled (or that I’m misinformed about). {Mistake: The easyRescue in test mode does send a burst of “SART Test” messages before shutting down. See comments below.}
So I broke the red seal and actually turned on the SART. I had two Class B AIS transponders on and attached to a few devices. Most just saw the signal as a target without a name (but with an MMSI starting with “970”, which is exclusive to SARTs). On many boats that would set off a possible collision alarm if it suddenly appeared close astern, but the Lowrance HDS and Simrad NSE also threw up a useful message alarm as you can see on the screen below. None of the AIS plotters put up the special SART icon discussed in comments here, but remember that these things are pretty new and, in fact, none of the personal size ones like the easyRescue are yet FCC approved for use in the U.S. In fact, I think I better get squared away with the authorities, particularly my local Coast Guard station, before I do the further testing I’d like to 😉 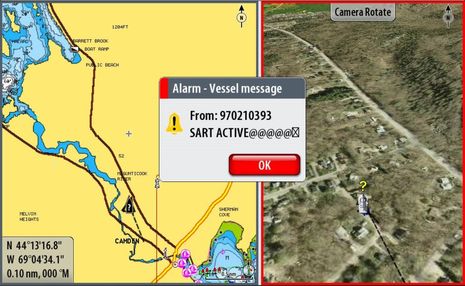