DSM150, Maretron for the masses? 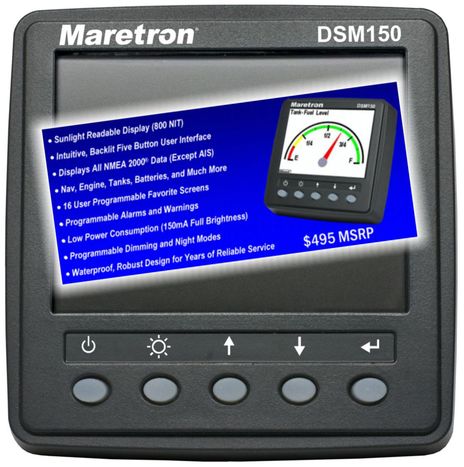 When Kees spotted Maretron’s new little display at METS, it didn’t seem like a big deal. In fact, it’s fairly homely compared to other contemporary NMEA 2000 all-in-one displays like the B&G Triton and the Raymarine i70. But now that the DSM150 is fully detailed, I think it represents a significant new opportunity for boaters who used to think that Maretron gear was out of their league…

It was good to hear Kee’s comment about how sharp the DSM150 screen looks because it packs the same 320 x 240 pixels onto its 3.5-inch screen as Maretron’s DSM250 does on its 5.7-inch screen, but what seems really significant is that the 150 is half the price of the 250 while using about 25% of the power and taking up much less helm or panel space. So the 150 is similar in size, power needs and price to the aforementioned i70 or Triton all-in-ones (or Triton’s Simrad i40 Color sibling or Garmin’s venerable GMI-10), but “all-in-one” is a vague term. All these displays will show conventional N2K data like depth, wind, heading, etc. and most all have some special abilities like the i70’s AIS display or the Triton’s handsome True/Apparent Wind graphic or Garmin’s sophisticated engine screens. But Maretron “all-in-one” is nearly another world altogether… 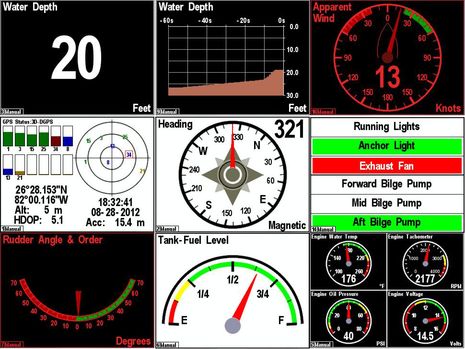 Over the years Maretron has developed an amazing array of NMEA 2000 sensors and other utility hardware, many of which aren’t available elsewhere and all of which can be displayed, alarmed, configured, and managed with a DSM150. Maretron has also made good use of native N2K capabilities like Instances and Labels that other companies have largely ignored. The light and pump switch screen seen above is an example of both as those are custom labels for channels on a DCR100 DC Relay. But up until now the control and display of all this goodness required a DSM250 at minimum and was largely directed toward Maretron’s powerful N2KView software. I’m sure I’m not the only mid-size boat owner who’s gotten jealous of big Maretron installs like the one I saw at Lyman Morse last spring. It’s not that I need that big, bright touch screen or the dedicated N2KView computers, but I’d sure like access to some of Maretron’s specialized black boxes. 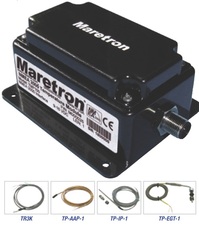 I have a good example. I count myself lucky that an engine room check revealed a main engine coolant leak while I was moving down the ICW in late September and thus I was fairly well prepared when the engine’s heat alarm let me know that the leak had gotten drastically worse. But it’s easy to picture a different scenario that might have drastically messed up my cruise plan and my bank account! That’s why I’d like to install a Maretron TMP100 Temperature Monitor that could not only keep a redundant finger on the engine block but also measure exhaust and three other temperatures that might save me heartache from future mechanical failures. Or even make life aboard easier, as in “Has the engine heated the domestic water yet?”
With the advent of the DSM150 the hardware portion of the TMP100 install would be about $1,000 (depending on which of the four available probes are selected) and the results should be slick. It’s a little daunting at over 200 pages but if you download the manual from the the DSM150 page, you’ll see that it’s possible to choose a standard N2K source for each channel — like “Bait Well” or “Heating System” — as well as to apply a custom label for each temperature and the box itself, as suggested on the configuration screen below (top left). The labels will probably only show up on the DSM150 or other Maretron displays and software, but I believe that other manufacturers could support this function.
In fact, you can pretty much count on Maretron gear working as well as possible with N2K gear from other manufacturers. For instance, once NMEA finally finishes a set of Standard Power messages (PGNs), I’ll bet that the DCR100 relays — which can also measure current — will be operable by more than Maretron displays. And consider how a small Maretron system could grow. Besides for various other sensors able to monitor fuel flow, fluid pressures, 12v battery and AC states, etc. etc., Maretron has already developed ways to get this information into WiFi and even off the boat. Note how the DSM150 screen below (lower right) can configure an IPG100 Internet Protocol Gateway.
Be aware, though, that as once discussed on Panbo, the IPG100 is currently limited to use with N2KView software. But if Maretron is trying to expand its market to smaller boats, maybe it will open its gateway to third party apps? Wouldn’t it then make sense for the adventurous folks who are trying to go all iPad or similar to also use the company’s GPS, Depth/Speed/Temp, Heading, and Weather sensors (which have been working fine with everything on Gizmo for years)? Please speak up if you like this idea.
But even if Maretron doesn’t go that far in opening up its systems, the DSM150 just made a lot of interesting possibilities more feasible for smaller boats and budgets. 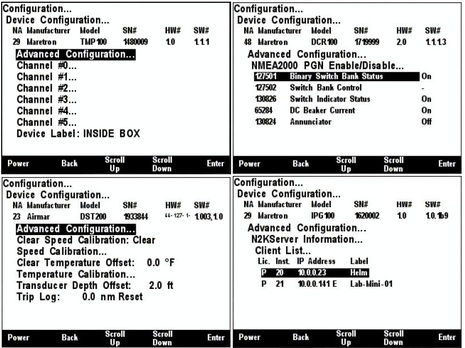