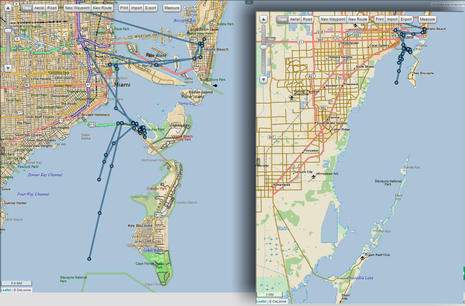 While we’ve barely begun 2016, the state of recreational marine radar is entirely different than it was in 2015. The simultaneous introductions of Furuno and Garmin solid state Doppler radars in Miami was a stunning coincidence, but the bigger picture is that all four major brands have now embraced solid state technology and a major transition is underway. During the show I spoke with a lot of product managers as we checked out their particular new radar underway, and my (partial) track map above (in two scales) may help readers to better understand the screenshots I brought home... 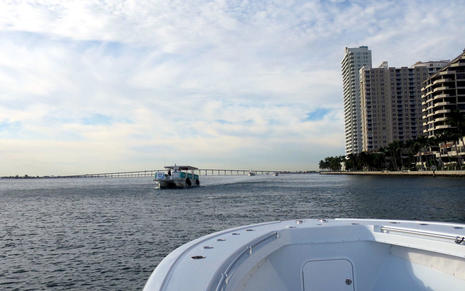 Thanks to a wide variety of fixed and moving targets, the Miami area is a pretty good place to test radars. It may never suffer the near-zero-visibility fog conditions that make the tool so important where I cruise, but a dark night with all sorts of boat traffic masked by sometimes over-the-top downtown Miami lighting must still make a good radar very valuable. This channel along Brickell Key is actually one of the least congested around the city, but I like how the photo also shows the big Rickenbacker Causeway bridge that goes out to the new MIBS site on Virginia Key. I took this photo on the early Furuno demo that began downtown and ended at the show, but proximity to the bridge meant that most demo trips could slip under it to get long radar views south down Biscayne Bay. 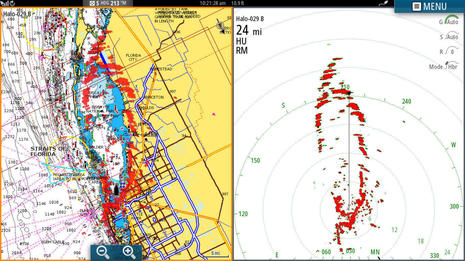 That’s exactly what’s happening on this screen with a Simrad Halo 3-foot open-array radar set to 24-mile range but painting Biscayne Bay as far as 32 miles away with the windows in “look ahead” mode. As with all the demos, the radar antenna is installed about 10-12 feet off the water on a T-top so radar horizon is definitely a factor, and checking the charts and satellite photography I don’t see much in the way of high, hard targets way down that bay. Thus, I think this looks quite good for Simrad Halo and solid state in general, and I’m bringing it up now because long range performance is the aspect of ss radar that informed boaters worry about the most. 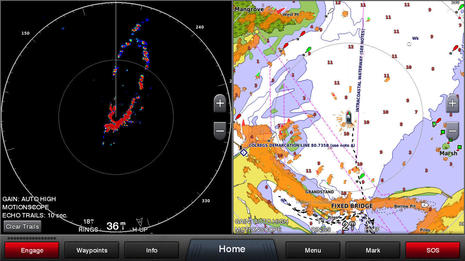 In fact, all the solid-state marine radar developers seem to agree that putting sufficient energy on long-range targets is their biggest challenge. But here’s the Garmin Fantom 4-foot open array similarly imaging the low shores of Biscayne Bay in 36-mile range, and it was still running beta software. The real test for solid-state open arrays is probably how they compare to their proven magnetron competition at spotting distant weather cells and birds, and I particularly look forward to reader feedback about this (as I don’t have much recent experience with big, high power “traditional” radars).

One thing I’m pretty sure of, though, is that we’re just seeing the beginning of where solid-state radar will go. The Doppler target speed-marking feature that I will cover deeper in the next entry seems hugely valuable, for instance, but there are other possibilities like improved weather and bird discrimination, better wave filtering, and more. It’s not easy, though. While the availability of reasonable cost solid-state components is definitely a reason that all this change is happening now, a marine electronics company cannot just buy a generic ss radar module. All these new radars represent long development projects, the abilities of individual RF and software engineers is critical, and the resulting radars are all different even if they have similar long-term possibilities.

One sign of this nuance is the fairly significant main bang (blacked out) area you can see around the Fantom demo boat at 36 mile range. Fantom and Halo apparently use a similar pulse compression technique with multiple simultaneous burst lengths — Halo tech detailed here and here — but in Garmin’s implementation the ignored area is proportional to the range. This particular detail doesn’t seem very important in practice — note the fairly minimal main bang on the Fantom’s simultaneous 2 mile range — but don’t expect all these solid-state radars to work the same.

(By the way, I was completely surprised when Garmin announced acquisition of DeLorme on the first day of the show, but it was a little more fun making those tracks in the top image with my latest test DeLorme InReach. I’m excited about what the DeLorme team can do under Garmin’s wing, and hope to report more when possible.) 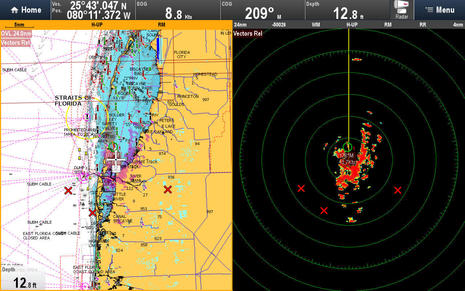 Now, here’s the new solid-state Raymarine Quantum 24-inch radome at its maximum 24-mile range, with results I’d guess similar to its most direct competitor, the Simrad Broadband 3G, but not as good as some smaller magnetron radomes like Ray’s own RD418HD (which I’ve been long testing on Gizmo since 2009). Note how the low Florida mainland peters out at about 8 miles, though one good target is visible at about 19. (I think it may be the Turkey Point Nuclear Generating Station, but the out-of-whack overlay and even the available charts don’t help.) But we’re talking about this radome’s longest claimed range, which many boaters may never use for navigation (thanks, GPS) or distant collision avoidance (thanks, AIS). Overall, my first Quantum impression is of a competent $1,600 radar with some neat possible updates in its future and a genius install option already available. You’re looking at radar data coming to the MFD over WiFi, which means that most any radome can be replaced with a Quantum without replacing the cable; it’s not the ideal way to go, but you or your installer can simply find the two power wires in an existing radar cable (that may be inextricably buried in your mast), splice them to a Quantum pigtail and then set up your Ray WiFi to include the radar. Done! 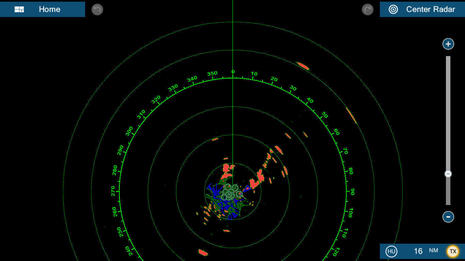 We did not get south of the Rickenbacker bridge during the Furuno DRS4D NXT demo I greatly enjoyed, but Furuno kindly sent me some screenshots from a later trip. Looking ahead here at 16 nm range — NXT like Halo purportedly optimizes all ranges simultaneously — the returns look most similar to the Quantum, with the shoreline fairly flaky beyond 8 miles and the Turkey Point towers joined at 20 miles with what’s probably another industrial stack more inland. I don’t doubt that the NXT has earned its 36-mile rating with some good high targets, but again long-range solid-state high performance from a radome-size antenna seems a work in progress. And then again, wait until you see what else NXT can do… 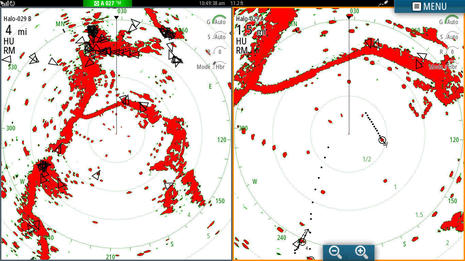 First, let’s look at another round of solid-state radar screens, but at closer ranges. Above is the Simrad Halo3 looking good, I think, at both 4 and 1.5 mile ranges. I’d had a less satisfactory experience with Halo’s longer ranges and the recent MARPA update during the January writer’s event, but learned in Miami that we’d been using a heavy sea clutter setting that was later identified as “over aggressive.” You’ve already seen decent Halo range earlier in the entry and those two MARPA targets above are a tiny percentage of all I tried in Miami. Seeing a MARPA vector calculation match a target’s AIS vector is always comforting and I saw the Halo quickly lock and accurately track several center consoles doing over 40 knots.

Navico’s solid-state Broadband 4G radome, which I’ve long tested and really appreciate, is getting short shrift in this entry, but many owners will be glad to hear that migrating the Halo’s new MARPA algorithms to 4G (and 3G) is a “high priority item” (recent Panbo discussion here). 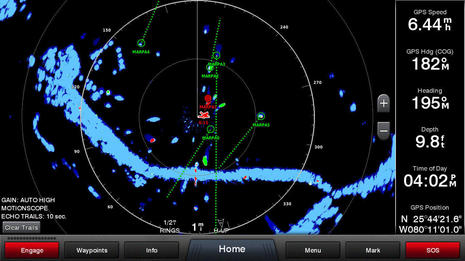 During a busy day of demos, I frankly wasn’t anticipating organizing my coverage by ranges, but here’s the Garmin Fantom 4 at 1 mile range just south of the bridge with lots of traffic going every which way. Its MARPA worked very well, but we had the radar set up for Doppler “Motionscope” and I’m pretty sure that most users would prefer that for easily identifying important targets, plus it’s a whole lot easier. My intention is to focus on Doppler in the next entry, but, dang, I’m also pretty sure that two of those red targets are boats overtaking us while still under the bridge, and several more are shuttle buses or trucks on the bridge which happen to be moving in our general direction at over 5 knots in the traffic! 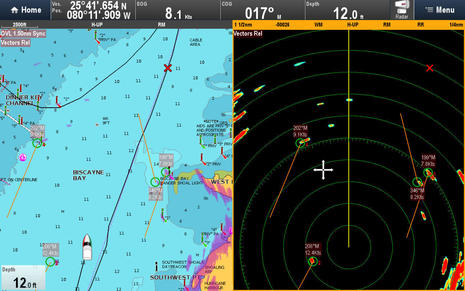 Here’s the Raymarine Quantum Q24C — there may be other models soon — at 1.5 mile range. It, too, was acquiring MARPA targets quickly and accurately (which I could verify in the clear daylight conditions). I also noticed the results of what FLIR/Ray calls “ATX advanced target separation technology,” which means better horizontal resolution than what’s normally seen with magnetron radars of the same antenna size and which seems like one of the many feature possibilities common to all solid state marine radars (like quick startup, low power use, and negligible emissions).

Now a bigger thought: Isn’t radar the very crown jewel of marine electronics? GPS chartplotting is nearly essential, of course, but there’s not that much specialized hardware involved, and some of the best plotting and planning software runs on standard computers. Sonar is very marine hardware and software specific, and recent advancements are wicked exciting, but it is not as critical to vessel safety (and backup navigation) as radar.

At any rate, below is a screenshot of the first Furuno NXT at 1 and 0.125 nm ranges. Again we had the radar in Doppler- target-speed-discrimination mode even while tied up at the show marina, maybe just because we could. True-color mode could have indicated more detail about the various targets, as it also did on the Garmin Fantom, but it’s very special to see any target moving toward you highlighted in very contrasting red. As enthusiastic as I am about marine electronics, “game changing” is a term I rarely use. This is it, I think; more to come. 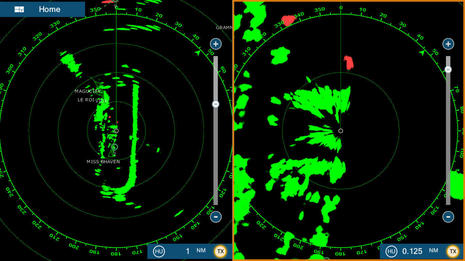