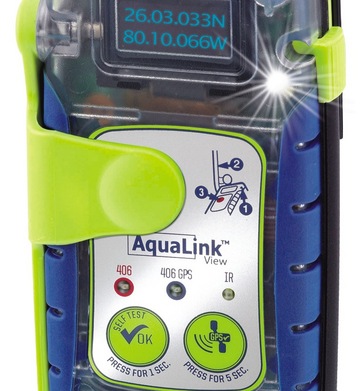 The new ACR AquaLink View sure looks like the most sophisticated and best performing Personal Locator Beacon (PLB) ever designed.  Built-in buoyancy, 6.3 Watts of 406 MHz distress output, a 66 channel GPS receiver, 30 hours of battery life…the specs go on and on.  But that’s not all.  This PLB is also designed to take maximum advantage of ACR’s new 406Link through-satellite testing service, including its ability to deliver SPOT-like “I’m OK” messages via email and cell phone.  406Link also offers some level of service, even free testing, to the owners of many EPIRBs and PLBs, including lots of models not made by ACR…

What ACR did was to work with, and then purchase, the SaveLife testing system that I wrote about last Spring (following earlier through-satellite testing schemes that promised users a new level of confidence but didn’t seem to pan out).  So now a big company with a tremendous reputation amongst beacon users owns ground stations that can pick up EPIRB/PLB test messages fired off anywhere in the Americas or on most of the adjoining oceans (with global coverage “Coming Soon”, as seen below).  ACR’s new site 406Link.com explains the service fairly well, and I’m sure it will get filled out with details eventually, but I’ll try to answer some questions that I heard asked Miami.
Like, “what about battery life?”  ACR says that their beacon power management is getting ever better, and thus the AquaLink View can deliver some 400-500 test messages without GPS and 60 with GPS without affecting the required 24 hour working life even after 5 years and at 0 centigrade.  In fact, the PLB won’t let you run so many tests that you violate that battery reserve.  “What about the OK messages?”  As best I can tell, the $40/yr 406Link Basic subscription just messages the user indicating that the distress call got received by a GOES satellite, while the $60/yr Plus subscription adds two different canned messages, each addressed to a different list of five contacts, depending whether you do a non-GPS or GPS-included test.  It’s not nearly as versatile as what SPOT does (and is working on), but I suspect that a careful skipper could make very good use of 406Link’s limited messaging ability, or at least take comfort in the tool’s availability offshore.
“And just which EPIRBs and PLBs does 406Link work with?”  Well, ACR has a list up, but it’s not detailed about, say, the number of tests a particular unit can tolerate or its GPS testing ability (pretty rare, I think).  There’s also a FAQ where you’ll learn among other things that beacon testing is as sure thing as actual use since only a single burst is sent.  But the great news is that 406Link is offering a free one-time test for any beacon that’s able.  The link, illustrated below, is on the lower right of the main 406Link page, and the test has to be done within two days of signing up.  I’d do it myself if I owned a beacon, and I’m hoping that many of you will give it a try and report back. 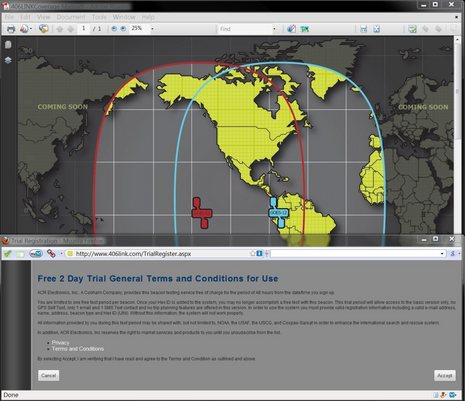 I’m hoping that ACR will loan me an AquaLink View so I can test 406Link hard, and besides I’m pretty intrigued with unit itself.  The manual page below (downloadable here) doesn’t even show all the messages it can display on its little LCD when you’re actually in trouble (and might really appreciate some reassurance that it’s working).  There’s a whole other set of messages covering testing.  While the McMurdo FastFind (which can’t be tested through the satellites) may remain the value PLB, the AquaLink View doesn’t seem expensive at maybe $150 more. 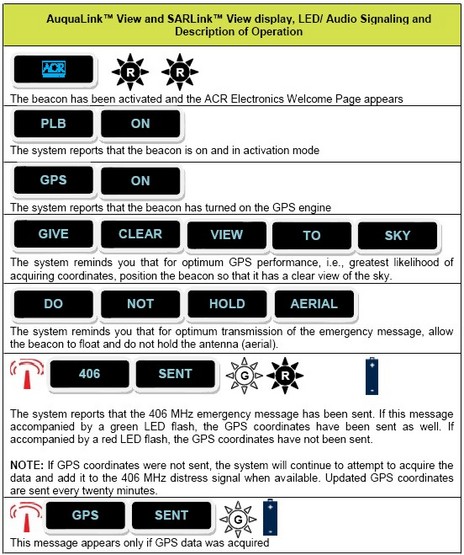