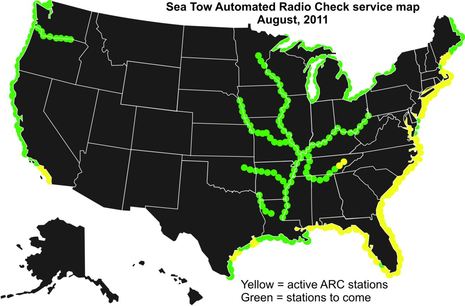 Sea Tow recently announced that all its franchises have now installed an automated radio check (ARC) service, and it seems very easy to use. Just check out Sea Tow’s ARC page for the active channel in your area — usually the old Marine Operator channel still managed by its communications partner Maritel — and make a call. If you’re in range you should hear an automated response telling you the location of the receiving base station followed by a recording of your call so you can confirm beyond doubt that your VHF is transmitting. Unfortunately I can’t try the system myself, as the active service map above correctly indicates that ARC doesn’t quite reach Penobscot Bay yet, but I’m hoping that readers who boat in active (yellow) areas will report about how it works…

And it’s definitely worth noting that Sea Tow is looking for companies willing to host ARC stations to fill in the green areas of that service map, and apparently they’ll supply the special radio if the company supplies power and a decent antenna. The host — presumably a marina, harbormaster’s office, or similar — will be named in the radio check preamble and will also have a chance to announce events after the check. Doesn’t this seem like an offer that could quickly extend the service map to include most all U.S. cruising waters?

To my happy surprise, I did complete a couple of successful automated DSC VHF radio checks with the U.S. Coast Guard yesterday.  I’d heard some time ago that some newer VHF radios had a special DSC test function and also that it was supported by the USCG’s Rescue 21 system, but it’s only now that my local Rockland Station is finally updated to R21 and I have a Standard Horizon GX2100 Matrix AIS installed that I could try it. Works like a charm!
All I did was to key the USCG’s general purpose coastal station MMSI 003669999 into the DSC Test function and a moment later I got ringing acknowledgement (and the screen below) indicating that the test call had been received. I honestly wasn’t positive that I could reach the Guard from Camden Harbor as my antenna isn’t great (working on that) and there’s lots of topography between Gizmo’s float and Rockland. It would be nice if the test returned the lat/long of receiving station, but it’s still good to know that your DSC is working, especially with the folks who might rescue you if things go wrong. And extra especially for all the boaters who’ve never even tried DSC.
At any rate, I gather from the Standard Horizon manual that DSC Test will work with any other radio that has the function built in, and of course you can test most any DSC radio by simply getting the MMSI of a friend and trading direct calls. Here’s hoping that some of you will try that, or the USCG automated DSC, and/or the new Sea Tow verbal radio test, and tell us how it goes. 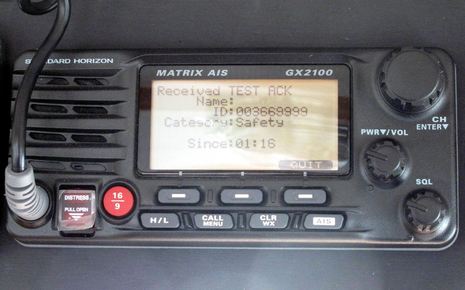