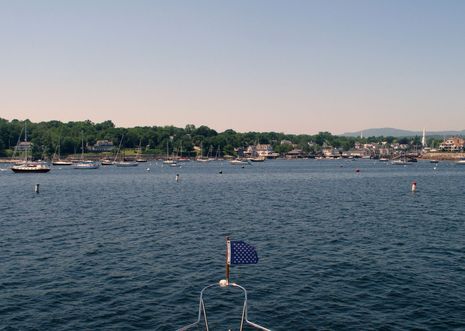 So I’ve done more research into the various small issues I’ve noticed regarding recent NOAA chart changes to Camden Harbor (discussed most recently here).  Let me emphasize small, and also my appreciation of NOAA as an agency with vast tasks and limited resources.  The intent of charting the Outer Harbor channel buoys maintained by the town, and updating dock details in the crowded Inner Harbor, is excellent; nearly every day I’m around the harbor I hear visiting boats getting guidance about these matters via VHF, and the verbal guidance often doesn’t work well.  But the chart update issues certainly bring up questions about data sourcing and NOAA’s quality control system, as well as others regarding intentional and unintentional chart presentation details.  And they probably apply to the official charts all around the country…

If you click on the top picture, you’ll see what the channel looks like now, as seen from its outer end.  It’s darn straightforward (aside from the fact that you can’t see where it starts when entering the harbor), and it’s looked generally like that for decades, though I think the Harbor Master may have adjusted the buoy lines slightly during some spring settings, seeking maximum width without any of the moored boats swinging into the channel.  (He has the buoy and mooring locations all databased on a plotter and in a PC charting program.)
At any rate, I ran close along both buoy lines last week, marking the red and green balls as best I could (though not realizing that some of the no wake buoys are also charted as cans and nuns), and you can see the results below.  I was surprised to find that the newly charted red buoys largely reflect reality and that the channel is indeed offset from the Special Anchorage Areas boundary lines that are supposed to define it.  I hadn’t noticed that before and don’t yet understand it, as the Harbor Master created those lines himself during the long process of having the Areas officially approved.
But one thing I’m 99.9% certain of is that the green channel buoys have always been in a line and that line has never been near the charted location of #13, which is way into a field of granite mooring stones that rarely get moved.  Or even #15.  Apparently the party who charted these so-called “private aids” was either the U.S. Coast Guard or members of the USCG Auxiliary or Power Squadron working through something called the
Cooperative Chart Updating program (mentioned at the bottom of this NOAA page), and I understand that plotting mistakes get made.  What I don’t understand is how this channel buoyage got through a quality control process.  Have you ever seen a channel buoyed like this, especially one running through an area of consistent depths and no hazards?  Shouldn’t a cartographer have questioned it? 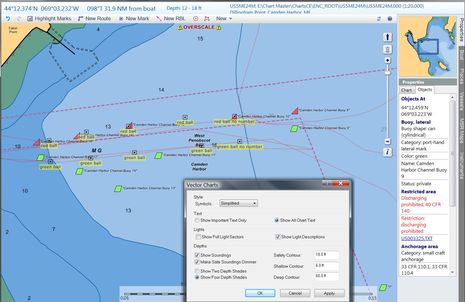 I also don’t understand what happened to the “Priv aids” label prominently displayed on the new paper chart (and RNC below) when the new ENC was created.  NOAA says it has no control over how ENCs are displayed, which is true, and that’s why I put Coastal Explorer in full detail mode above, and opened the ‘options’ box indicating that “Show All Chart Text” is enabled.  So is CE somehow ignoring a “Priv aids” label or did it not become part of the ENC database?  If not, why not?  (Note that if you dig into the ENC buoy properties you’ll see “Status:private” info, but it takes some digging.)
I’ve also learned that NOAA’s policy is that “All aids, regardless if private or federal maintained, are depicted using the US/internationally recognized symbology” but I question that too.  It seems to me that older charts used to graphically differentiate official buoys from private ones, which is generally true to reality.  The reality that all those numbered cans and nuns above are in fact unnumbered round balls or even “no wake” pylons seems like a good example of why such a “uniformity” policy can be confusing.  And why the “Priv aids” label is a valuable tip off to a fog bound navigator.  Now to the Inner Harbor… 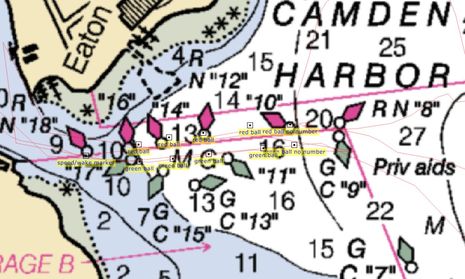 An interesting thing about the first 1:20,000 scale Camden ENC is that all those docks at the head of the harbor are not copied from the equivalent paper/RNC, but instead represent a fresh survey by someone.  And for the most part the Public Landing at lower left is very faithfully represented.  Gizmo really was alongside that particular drop off float when I took that “New Mark”.  But the pier I clicked on in CE does not exist (and never did exist), which is easily seen in many available satellite photos… 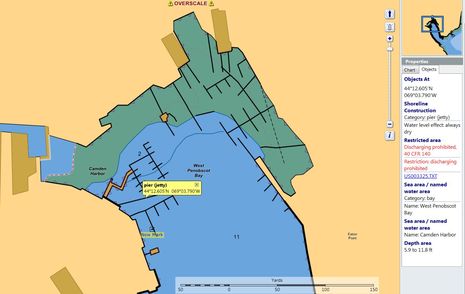 …like Google Map’s below.  Note, though, that the Google photo predates the big changes that Wayfarer Marine made to its marina area seen on the upper part of both images.  The ENC representation is much closer to ground truth, even if it doesn’t reflect the extensive dredging that’s taken place over the years (why all the yachts in those slips don’t actually go aground at low tide).  I know I’m quibbling over minor details, but, gosh, if you’re going to this much chart updating trouble, why not go a bit further to get it right?… 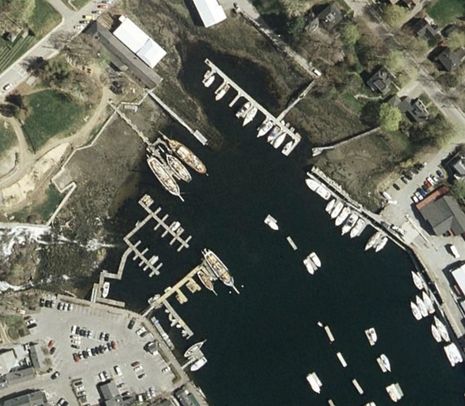 After all, these charts represent the official source data, which will be slowly but
surely copied to all the commercial charts because it is the official
data.  And while I know that there are numerous corrective processes in
place, I’m a little leery about how long they’ll take.  I just got an
email response this evening to my discrepancy report of June 29, and all
it says is that a question about the buoy locations and numbers (as if)
has been sent to the USCG.  Which corresponds to this rather Catch 22-like statement I
got separately from a NOAA regional representative:

As
for the inaccurate position of the aids, NOAA charts what is known. NOAA looks to the US Coast Guard as the authoritative source for Aids to Navigation. The maintenance and movement of Private Aids is generally not reported to the Coast Guard once they have been established.  Therefore, the Coast Guard has no update to report to
NOAA for charting action.

Hopefully
I’m wrong, but I think that good old non-existent Can 13 is going to stay on
the Camden Harbor chart for a while because…well…now it’s official.