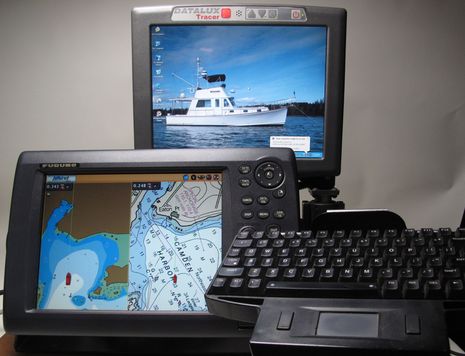 My search for Gizmo’s navigation PC has taken a strange turn — as you can see above, posed around a Furuno MFD12 — and I’m blaming a Panbo commenter who recently crowed about scoring a 12v, fanless all-in-one Datalux iPix on eBay.  I’m close to crowing myself — and maybe a few of you will join me, as there are three left — but I could use some geek help to better understand what’s under the hood of this particular Datalux Tracer police car computer…

The nice-seeming lady who bought a bunch of these at some auction in California (or so she tells me) couldn’t figure out exactly what their age or specs are, and the Datalux site is not all that helpful, but I think I have a winner, at least in terms of cheapskate boat computing.  I posed it with the MFD12 to demonstrate that its 12″ LCD touch screen is pretty darn bright, and I like that you can turn it off altogether with one of those upper buttons, and that it dims quite low.  The red backlit keyboard is great, and there’s no doubt it’s built at least for a coffee and donuts level of abuse 😉
I also used the MFD12’s amazingly beefy bail mount as a temporary clamp point for the Tracer’s unusual, but also beefy, column mount.  The screen swings about 90 degrees on it, while the keyboard hangs on a double-swivel arm and can also pop off and hang on a steering wheel (or at least an automobile steering wheel).  I think there are some good install possibilities for this thing at Gizmo’s sometimes sunlight-flooded lower helm, but it will take some imagination and fiddling.  And first I need to confirm that the PC inside has the horsepower needed, as I persuaded the seller to grant me return privileges subject to that analysis.
Below you can see the main screen of Windows SysInfo run on the Tracer and here is the complete file that should open on anyone’s Windows system.  And here’s the verbose text version.  At this point I believe that the unit, labeled a TCU-TX200-028, is a Tracer III model dating from about 2006, and I’m concerned about memory, graphics ability, and so forth. And and all advice will be appreciated.  And here’s the eBay page where three more of these are available at $399 plus shipping.  I will gain nothing from further sales, except perhaps some compadres who are also trying to turn one into a nav machine. Maybe someone can figure out how to make that red button, apparently disfunctional at the moment, turn on Gizmo’s underwater lights, or a siren?
But one thing I want to make clear:  I believe that the vast majority of boaters would be better off with a computer that’s truly built for marine navigation, like the Furuno MFD12, even at much higher cost (in dollars).  The Tracer may be an interesting project, if I keep it, but there’s a lot that could go awry. 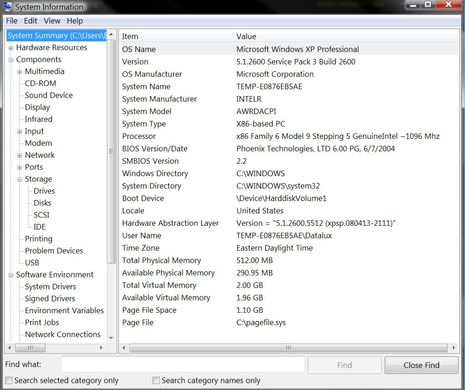