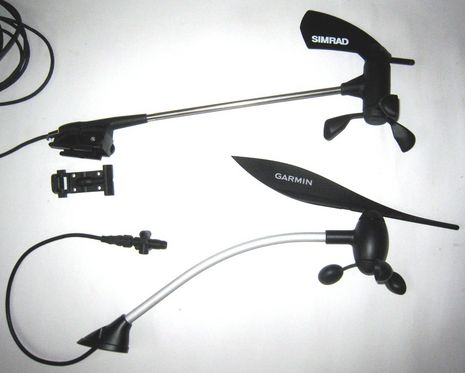 Finally got back in the lab on Friday, and it was a real pleasure to hook up the new Garmin wind whirly. I’ll start, though, with my main complaint so far, which is the mast mounting scheme.  The photo above compares it to the only other NMEA 2000 mechanical wind sensor I know of, Simrad’s IS20 SimNet Wind Vane.  Note how the Simrad has separate base plate that typically gets screwed permanently to the mast head.  The vane itself clicks in like a boot into a ski binding, and the cable connection is simply a snap-in SimNet plug with a built-in retainer wire.  A guy on a bosun’s chair could remove or replace this vane with one hand, no problem.  The Simrad vane cable, incidentally, contains a backbone terminator because vanes are almost always too far–i.e. more than 6 meters–from a backbone to be just dropped in.
By contrast, the Garmin vane base gets fastened direct to the masthead, period, and then you have to deal with that N2K tee-like piece, which is actually an inline terminator. (Or use a Maretron inline terminator, which is sleeker.)  But while the mounting is inelegant, there is much to like about the Garmin’s GWS 10…

For starters, it was pie simple to update the lab’s GMI 10 to new firmware that understands wind data and how to calibrate the Garmin vane (and includes many other improvements). Of course you need a Garmin N2K device with a memory card, like the 5212 below, but then it’s just a matter of downloading one file, running it to populate the SD card, and sticking the card in the machine. It updated not only the 5212 and GMI 10, but also the GWS and GPS17x sensors.
Now this wouldn’t be particularly surprising except that I’ve come to understand that pushing firmware updates over a N2K backbone can be problematical. I learned recently, for instance, that Raymarine has an update for the ST70, via E-Series, but is only letting installers use it for fear of “bricking” the instrument. And I bricked a Maretron sensor myself once when I flashed it from N2KAnalyzer (Maretron’s update routines have been beefed up since.)  In fact, the safest practice when updating N2K firmware is to do it over a very simplified network.  But I threw caution to the wind with the Garmin.  There were maybe twenty devices live on the lab’s network while the updates below ran without a problem.
And the updated gear looked great, but you’ll have to wait for photos and more detail. The lab, my house, and most of my area has been without power for about 16 hours now, and I’m not sure when we’ll see it.  Even my standby WiFi spots–coffee house and library–are shut down.  I’m filing from a McDonald’s in Rockland, and need to head home and stoke the wood fire 😉 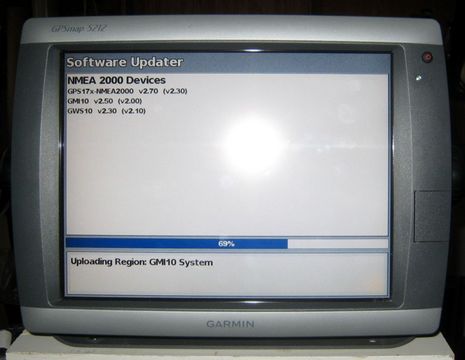