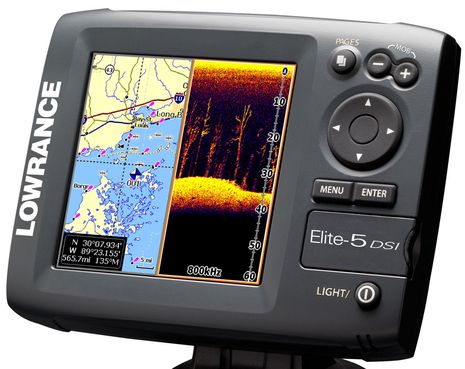 Last week Lowrance announced the Elite-5 DSI and some related fishfinder/plotters, and while they’re unabashedly aimed at freshwater fishermen, there’s at least two things of interest to others.  DSI stands for DownScan Imaging, which seems to mean that Lowrance has isolated the high resolution down-looking portion of StructureScan into an even more inexpensive form.  That means a transducer that can ping at 455 or 800 kHz, trading detail for depth and breadth.  Aren’t lots of non-fishing boaters — like gunkholers and/or curious monkeys like me — also interested in detailed bottom imagery, even if it’s only to 100 feet or so?  That’s why I installed StructureScan on Gizmo even though the thru-hull transducer wasn’t ready yet, and I can’t wait to seriously experiment with it (soon!).  The new Lowrance plotters will also be the first I know of to exclusively use MicroSD chart cards…

The move from regular SD cards to the micro size is no surprise, but I didn’t realize that Navionics is already doing it, as indicated on its card catalog pages.  They very likely come with an adapter to fit regular size SD slots, so the transition may be pleasantly hard to notice.  But learning that Raymarine is also going to support MicroSD cards may be a very pleasant surprise for folks who may want to swap to Ray from an SD MFD, or vice versa, or want to carry an SD plotter as a backup to a Ray machine designed for CF cards.
I’m not sure when the Raymarine CF-to-MicroSD adapter, and the needed software updates, will be available, or what it will cost, but according to this help page, all the C, E, and G series will be supported, and models that aren’t, like the early A’s, will get an adapter from Navionics.  Given that Garmin has been shipping charts on MicroSD cards for a while, are we moving to one standard card size for use in all MFDs and PCs?  Wouldn’t that be nice?

PS. Raymarine will include the CF to MicroSD card adapter with MFDs starting in September, and the charge to existing MFD owners will be $30.