Raymarine Wi-Fish and FLIR One for everyone 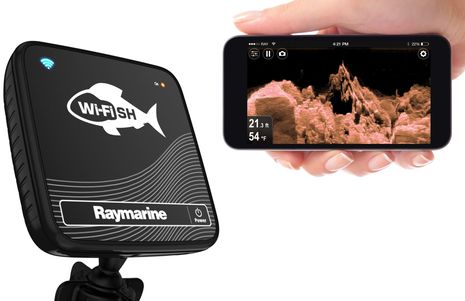 Some days I feel like retiring, but wow, the changing technology I enjoy covering just won’t let up. Yesterday Raymarine introduced the wonderfully named Wi-Fish, which seems at least visually even more a sign than Furuno’s DRS4W WiFi radar of how mainstream marine electronics can accomodate our collective fascination with mobile computing. Wi-Fish is essentially a Dragonfly sonar display without the display but with an app that can purportedly do its job and more. And Raymarine didn’t stop there, also introducing a variety of new 4- and 5-inch Dragonfly models, including Pro versions that support the Wi-Fish app while also offering an “All weather viewable” display and GPS plotting on a great choice of chart formats… 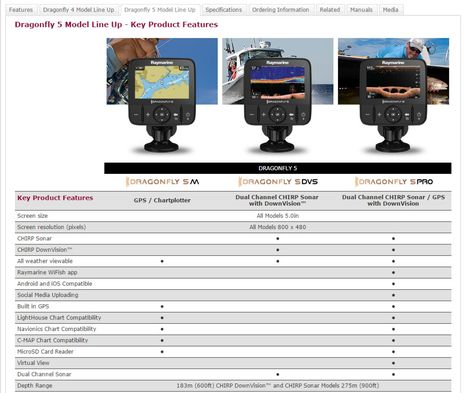 The Dragonfly 5 model lineup tells the story, and there are also three 4-inch versions, though mixed differently. Raymarine seems to have no qualms about building and distributing a huge number of models in order to give customers exactly what they want. So you can have a Dragonfly 5M that’s all chartplotter, a DVS that’s dual CHIRP sonar and DownVison, or a Pro that combines all of the above with the Wi-Fish app as frosting on the cake. Also, have you ever seen “Social Media Uploading” as a marine electronics feature before (some of which may make the impressive Dragonfly Screen Capture gallery)? Note, too, that these are the first Raymarine displays to support Jeppesen C-Map charts as well as Navionics (plus Lighthouse vector and raster here in the U.S.), a choice coming to all Lighthouse II MFDs soon. In fact, C-Map base maps are default on the new Dragonflys, which may indicate a tidal change, but then again, the Wi-Fish models could work sweetly with the Navionics charting app, particularly in Vexilar-like SonarChart mode.

I have not seen pricing on the new Dragonflys yet, but the FLIR press release that went with the CES debut yesterday claimed the first CHIRP downview sonar under $200. Mama FLIR herself was showing off what might be described as the FLIR One V2 thermal cam. What you’ll mostly see on the product site is the original version, which only fit the iPhone 5 and 5s, but the new dongle-style design will work with many Android phones. It’s due out around midyear and given the reversible Lightning port found on most iOS devices, that model will even take “thermies” like the one below. 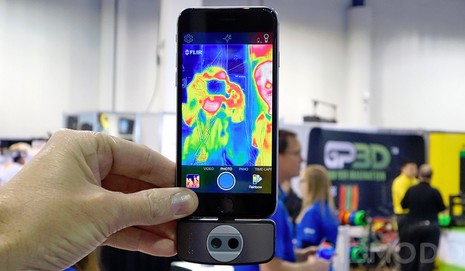 Gizmodo’s Andrew Liszewski also reports that the new FLIR One will have more resolution but be less expensive and still retain the unique MSX dual cam technology that overlays the thermal imagery with edges captured with higher res visible light. It may be a crushing blow for the somewhat similar Seek thermal cam that several Panbo readers have asked me about. I warn them not to presume that a camera like this can perform like a true thermal navigation cam (which FLIR certainly doesn’t claim).

In fact, I got a brief chance to try a prototype FLIR One V1 during their Miami press cruise last year, and you can see below that even a fairly close bridge seemed out of range. I did wonder if the MSX image enhancement, also available in a new C2 pocket camera, might be useful in a real thermal navigation device. Then again, my shot was a prototype quickie and the new version is higher resolution. Plus, there are many shorter range uses for an inexpensive thermal cam as rather hilariously demonstrated by Liszewski and also at a recent FLIR One Hackathon. App developer kits are available and there must be some neat ways to utilize this tech on a boat. 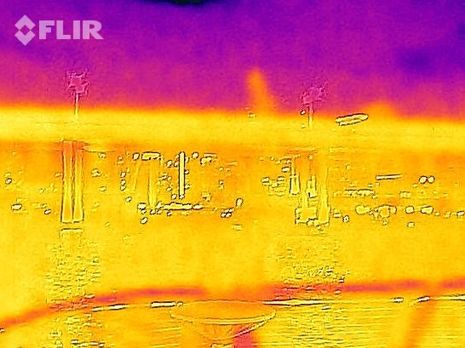 PS I just received a detailed press release on the new Dragonflys and the pricing is interesting. The 4 DV with CHIRP DownVision is $199.99 and so is the Wi-Fish. So there’s no cost difference between using the 4.3-inch display or the Wi-Fish app on your phone or tablet, just your preference. The Dragonfly 4 Pro offers the DownVision plus sonar and Wi-Fish support (but no charting) for $300, and the 5 Pro that does include GPS and charting is $550.