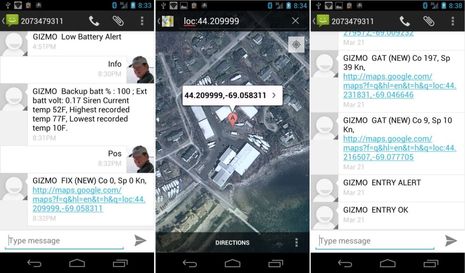 I like receiving an “I’m OK” text message from Gizmo every day, even if she is still sitting in the middle of Wayfarer’s back lot, and I’m becoming confident that the Siren Marine Sprite I’m testing will be very useful once it and the boat are fully commissioned. I’ll be able to set security or anchor drag geofences and not only get a warning if Gizmo moves but also precise tracking messages about where she goes. And whether on board or ashore I’ll get a head’s up if the refrigeration fails or if the bilges fill, or whatever other on/off sensor I hook up. I could even control, say, the deck lights with my cell phone, which might be fun when going aboard in the dark or if I get an intruder warning…

I suggest that you click to open the larger version of the screenshot collection above while I explain what’s going on. At top left you’ll see that the Pixie sent me a Low Battery Alert yesterday afternoon (after a inverter project led me to shut off the main battery switch). I later sent it an Info request and immediately learned that its internal backup battery was in good shape along with the stats for the temperature probe that came already attached. (I don’t know if the .17 volts detected from the turned off main battery is meaningful but I guess I should find out!)
At any rate, I then asked Gizmo —  there’s a command to name the Pixie as desired — her Position and immediately got back that Fix message with a Google Maps link that shows me how accurate the device is. The third screen is from when I had set a geofence around my truck and then violated it, causing a GAT (Geofence Atomatic Time) track message every five minutes. Everything about geofencing — like the fence’s radius, report intervals, etc. — can be customized but the defaults would probably work fine for tracking a thief or a kid in the outboard tender. I also tried a simple magnetic door sensor, but I still think I’ve only scratched the surface of all the technology and firmware smarts built into the Siren hardware seen below… 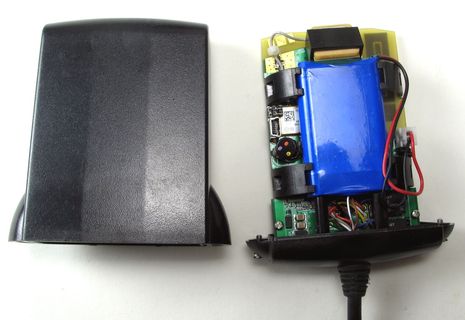 I should note, though, that the Pixie has not always responded to commands as quickly as it did last night. But that may be because I’m using a beta SIM card right now, and the reason why is actually reassuring. When I first got the test unit late last Fall, it didn’t work anywhere around Camden even though it used AT&T GSM data services and an AT&T iPhone works fine here. Siren Marine was pretty surprised about this, but I wasn’t as I’d had a similar issue with a Cobra C-Pod security system. There’s something weird about GSM in Camden, and since Cobra couldn’t solve the problem, I was never able to test what otherwise looks like an able system.
But Siren Marine was persistent. Founder Dan Harper — whom I met almost two decades ago when we both sometimes sailed aboard the schooner Ocean Star (which bristled with sextants under the auspices of Ocean Navigator) — carefully surveyed coverage along the Maine coast and dug deep into the intricacies of M2M (machine to machine) GSM service. It turns out that AT&T’s M2M truly is odd here due to a particular local roaming contract but that T-Mobile — whose phones don’t even work here! — is expanding its M2M service and that’s the SIM that’s working pretty well for me now. Incidentally, Garmin’s neat GDL 40 weather system, which could also be a NMEA 2000 off boat monitoring system I think, works fine here on AT&T, but apparently it uses 3G.
Harper is also hoping that the T-Mobile SIMs will let Siren offer unlimited messaging for the same $180 a year as the current service, but in fact 120 messages a month is not bad compared to, say, the Boatsense Solutions monitor I tested in 2007. The Boatsense company didn’t have the success it had hoped for, though I understand it’s on hiatus as opposed to shut down, but it didn’t offer nearly the same feature set value that Siren does. Like how about an iPhone app so you don’t have to remember codes like “Info”? Though it’s worth noting that Siren’s basic text messaging works on most any phone.
Please check out Siren Marine yourself, because I haven’t covered everything by any means. Will this be a boat monitor system that makes it? I’m also interested in other user reviews, though I will be back with my own “Siren Pixie hand’s on #2” report eventually.