I mentioned SRT’s amazingly miniaturized Class B and SART AIS modules back in May, but seeing is believing. In that aluminum EMI enclosure at left is a Cobalt Class B transponder complete with precision GPS engine and power supply (the board itself is inset)!  What we’re looking at is smart phone technology applied to a very specific marine use, and it shouldn’t be too long before these modules make AIS less expensive, more powerful, and much easier to integrate with other devices.  But I’m also hearing about a dark cloud looming as the marine world rapidly adopts AIS…

I once got my hands on something called a Smart Radio SR261 {absolutely no relation to SRT} and discussed how this cheap but uncertified transponder might cause real problems with the slot sharing scheme that makes AIS work well.  Several readers with a lot of AIS expertise agreed strongly, and I’m glad not to have heard much about the SR261 since.  But now there appears to be a problem with AIS testing firms outside the U.S. and Europe that don’t actually test transponders correctly.  I’m told that Samyung, Haihua Electronics Enterprise, Shanghai
Avionics
, and Alltek Marine have all secured local approvals in South Korea, Taiwan, or China for
Class A and B transponders that have all failed testing at the facilities (TUV and BSH) approved by the US and EU.  {Correction, 7/15: Alltek’s Camino 101 Class B transponder passed BSH testing in March, got CE certification on June 30, and should get FCC approval very soon.}  Apparently they are not always capable of adhering to the AIS slot mapping protocol, and could step on other transmissions.  That’s not good, and it may be difficult politics for the IMO to get all member nations to police their own testing firms.
Ships and yachts wander the globe, which is marvelous, I think, but also means that one nation’s regulatory laxness can cause trouble anywhere.  So on top of known AIS issues — like older Class A’s that can’t decode the B static data message, and ships that don’t pay much attention to AIS anyway — we have to worry about faulty transponders.  Damn.  The least we can do is to discourage bluewater sailors from buying transponders that lack US or EU certification.  For an example of how rigorous that testing is check out the files posted when SRT’s Class A unit was approved in May.  I’ll close with a shot of SRT’s developement lab in the U.K.; isn’t it comforting that the gentlemen who created those nifty-looking modules above are nearly as ‘mature’ as many of us? 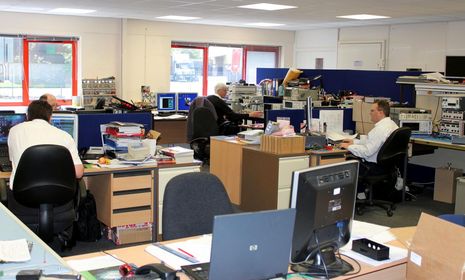