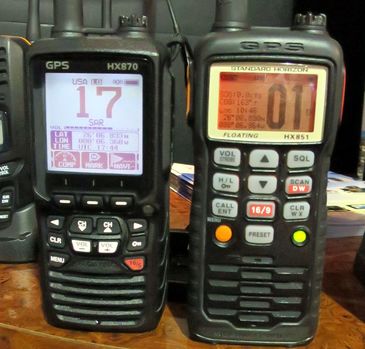 I was impressed with Standard Horizon’s original HX850 and I’ve been happily using the slightly upgraded HX851 model above for several years. It’s a fine handheld 6 Watt VHF (if you don’t mind the size), plus it’s always ready to place a DSC distress call and/or navigate a life raft (or tender or kayak or…). But wow, look what they did with the new HX870 model: The screen is at least twice as large, the interface seems usefully updated with soft keys and icons, the battery is substantially larger and more… 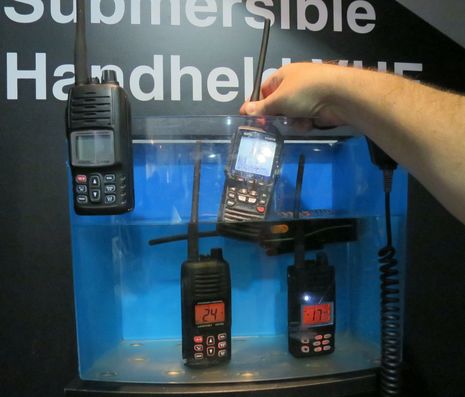 Despite the change from 1,380 to 1,800 milliamp internal lithium-ion rechargeable batteries, the HX870 still floats. In fact, this new model can even turn itself on and start its strobe light if it falls in the water (with or without you). Another improvement from the HX851 is a 66 channel GPS, instead of 12, and the 870 still comes with AC and DC chargers as well as an alkaline battery tray all at the same $250 list price.

These HX series handhelds are full-fledged DSC radios with all the direct/group calling and position polling features, but one general problem with non-distress DSC features is figuring out how to use them. That’s one reason that the new interface seems promising. I only tried the sample briefly, but it was easy to figure out how the left/right arrow keys scroll you through the bottom icons, which you can choose with a soft key. My thumb also liked the central cluster of channel and volume keys, though it took a bit to figure out how to press the squelch button on the left side and then use the volume buttons to set it. By the way, that MOB icon represents another new feature.

The easy to see and understand graphics seem to extend deep into the system menus and the big screen also seems good for navigation graphics like the compass screen below, which could be taking you to a waypoint or the position of a DSC distress call. GM (Group Monitor) is yet another new feature and while the 870 manual is not yet available, I’ll guess it means that you can track multiple vessels at once if they share a group MMSI.

Standard Horizon is no longer the only manufacturer offering a VHF/GPS/DSC handheld, but they seem determined to lead the pack. For instance, the HX870 is also a true Class D DSC radio — meaning it has a separate receiver always monitoring DSC channel 70 — while the Icom M92D and others are not. The powerhouse 870 is not on Standard Horizon’s website yet, but it will purportedly ship this month and is already listed by distributors like Landfall Navigation. 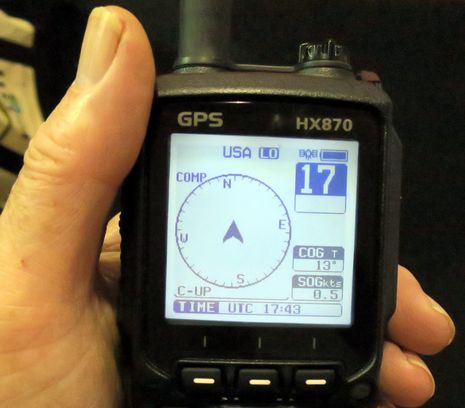