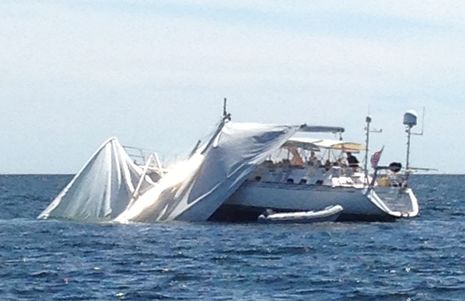 While my friend Leonard Lookner was first to come upon this distressing scene Wednesday afternoon, he too was sailing and thus, a powerboat just behind him was first to offer assistance. But it was Leonard’s iPhone photos that fueled a local PenBay Pilot news piece, which then prompted an interesting SailNet discussion. Of course, it was suggested that marine electronics or digital charts were somehow to blame – allegations I’d like to refute, and I also want to report on how well this worse-than-it-even-looks situation actually turned out. Plus, getting reminded to be careful out there is never a bad idea… 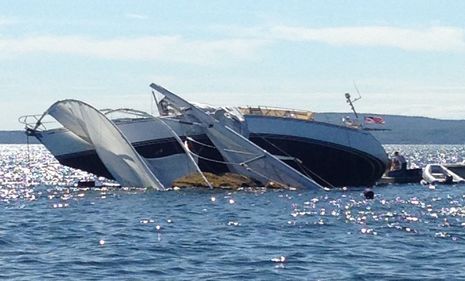 When the Hylas 70 hit the submerged ledge it was only about an hour or two after high tide, so the salvage operation not only involved removing a large carbon fiber rig, but also managing the yacht as about eight feet of tide went out from under a very precarious perch. In fact, what I’ve heard is that the teams from Wayfarer Marine and Prock Marine delayed the mast clearing operation when they realized that it was helping to hold the boat in place, but eventually the last shreds of carbon around the gooseneck gave way and she lurched hard to starboard, almost throwing a couple of salvors off the deck. 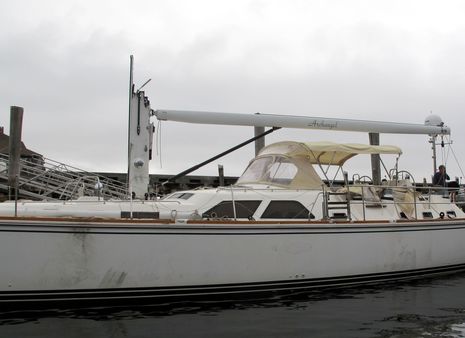 The good news? As I understand it, none of the crew or charter guests on board Archangel were seriously hurt, and the boat seemed to come out of it pretty well, too. Yes, she looked quite forlorn when I spotted her tied up at Wayfarer Thursday morning, but there were no emergency pumps in sight, and it’s said that she motored back herself once the tide came back up and Prock had used a crane barge to remove the mast. Credit to Hylas for a wicked strong hull and especially to the Wayfarer and Prock teams. Apparently, the Coast Guard investigators on the scene were amazed at our local capablities, but I’m not! 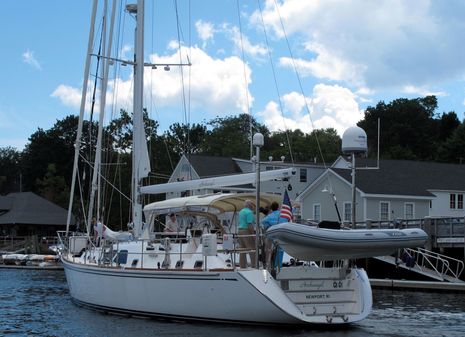 Then again, the photo above shows how snappy Archangel looked as she departed Camden just a few days ago, and who knows what internal damage the surveyors will find. The photos also seem to support the theory expressed on Sailnet that the large lower aperture for the GMT in-mast furling might have created a weak spot in the rig. I have no opinion on that subject, but this was the early Sailnet comment that got my attention:

I have read a few articles on how our reliance on electronic charts and plotters have increased the groundings, accidents, and sinkings. Once, when paper charts were the norm and you had to take physical readings, you never really knew exactly where you were. You had to fudge it a bit and give known hazards (and some suspected ones) a wide berth. With the “accuracy” of electronic charts and GPS, many sailors and powerboaters are cutting it a lot closer, thinking that what they see on the chart is really there and that the GPS is telling them exactly where they are on that chart. This does not take into consideration shifting bars, mismarked hazards, and even other boats that may have sunk there. 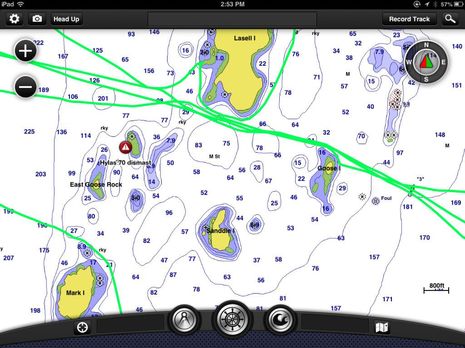 I’d really like to know more about the alleged articles showing how chart plotters are causing more groundings and sinkings (anyone?), because I am extremely dubious. And if there really is a statistical increase in accidents, which I doubt, how would anyone separate the presence of electronics from the absence of experience that so often distinguishes modern boaters from the old school? I also roundly reject the notion that knowing less about where you are on the water is somehow safer, and I’ve tried both. I think that what makes you safer is knowing the tools you have, and we have very good tools these days.
Check out some recent Gizmo tracks shown on the Garmin BCM app screen above. I only had them handy on my iPad because I was experimenting with Garmin data transfer recently, and I certainly didn’t create them to make a point, but note how consistently Gizmo stayed north of the clearly charted ledge that the Hylas hit. It didn’t involve “giving a wide berth” to every possible hazard, but rather driving quite close to the deep, bold southern tip of Lasell Island to stay in safe water. I’ve done this many hundreds of times over the last 40 years, starting with only paper charts, a compass, and a ‘flasher’ depth sounder. Nowadays, GPS, chart plotting, and radar make the passage more relaxed and help me keep my eyes out of the boat to better see the lobster buoys (and enjoy the sights). And an NMEA 2000 depth sensor mounted on Gizmo’s forefoot, along with Simrad StructureScan, help me make some of those interesting little side trips. (Note that I purposely went close to that submerged rock just above Mark Island, because I’ve never seen it uncover and was curious if there’s really something there, which there is.) 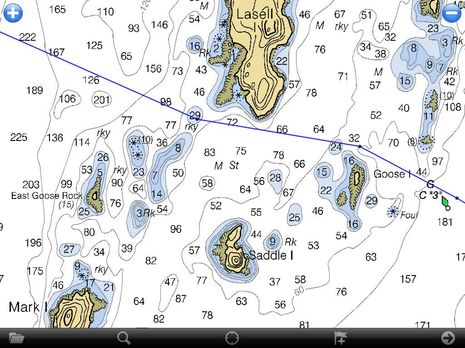 Above is the NOAA paper chart for the Lasell Island passage seen as an electronic “raster” chart (or RNC for raster nautical chart) in the app Memory-Map, with the commonly used route overlaid. I’m very comfortable with this format, and often find that it emphasizes the most important data points. Note, for instance, how the offending ledge, is annotated with “(10)”, which means that the “rock which covers and uncovers or is awash at low water” actually has a “drying height” of 10 feet. (Familiarity suggests that it’s more like 6 feet with our normal 10 foot tide range, but the idea is good, and you have to drill down in other charts to see it.) 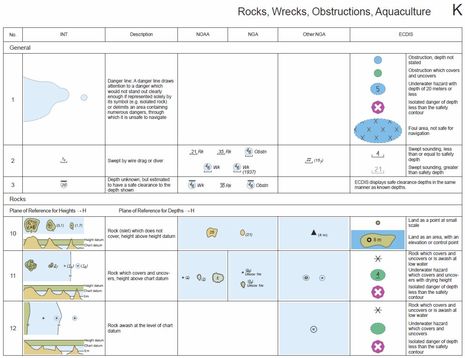 I was glad to see that very few SailNet commenters responded to the idea that Archangel’s skipper might have avoided the grounding by using paper charts — and one, who I know to be a great sailor, admitted that he’d hit the same ledge with a paper chart in his lap!  Several also recommended Nigel Calder’s excellent How to Read a Nautical Chart

, but I’ll add that you can freely download the underlying U.S. Chart No. 1 here and the latest edition includes a column of ENC symbology that unfortunately did not make it into Nigel’s 2nd edition. 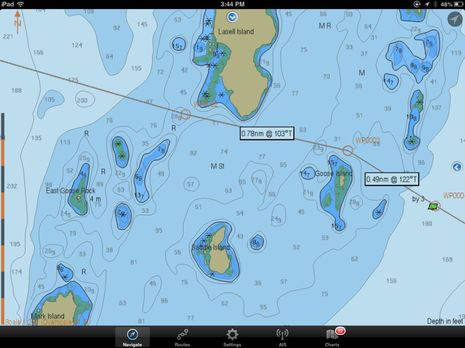 Above is a NOAA ENC (for electronic navigation chart) displayed by the interesting app SEAiq USA. Because they are vector charts they can look different from one charting engine to another and you can also customize the look to some degree. SEAiq offers excellent ENC control, I think, and doesn’t this chart look useful for getting through that passage? 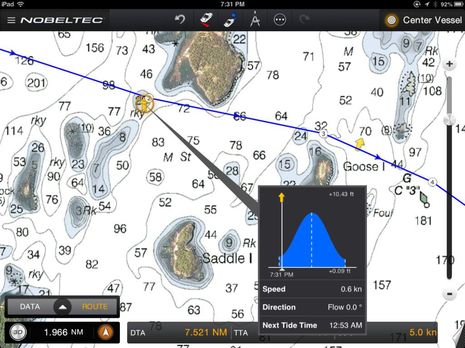 Here’s the NOAA raster overlaid with the PhotoFusion satellite maps that I so like in TimeZero products like the Nobeltec TZ. I think that this sort of land and shallow water detail can help a visitor understand these waters like a local does. Note, too, the overlaid tidal current arrows (though perhaps the only positive of all the lobster trap buoys is that you can use them to see what the current is doing every 30 feet or so 😉 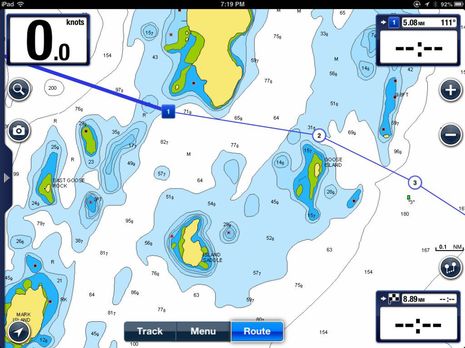 The Navionics Mobile vector chart utilizes bold colors well, I think. I also note that this and Garmin’s show an always-dry area at the end of that long ledge extending southwest from Lasell, which is true and also very useful information when you’re trying to pass close at high tide. I don’t understand why we’re not also seeing that on the NOAA charts, but it does seem to be an example of commercial electronics being a dite better.
Finally, the screen below shows C-Map charting in the app Plan2Nav, but I’ve put it in course-up perspective view, which would look better if I’d actually been underway. Not many boaters like this 3D style, but I think it can be a useful tool when understood. The overall point is that there were many electronic resources that could have helped Archangel’s captain get through that passage without a fuss. He screwed up plain and simple, and likely feels terrible about it (though I’ve heard he was an active and valuable part of recovery operation). I’ve screwed up, too, and probably will again. Perhaps the most interesting conjecture on that SailNet thread concerns the multi-tasking stress of running a high-end charter operation, but if you want more knee-jerk anti-electronics sentiment — “Another computer assisted grounding, perhaps?” — check out the CruisersForum discussion.  Am I off-base to be annoyed by this stuff? 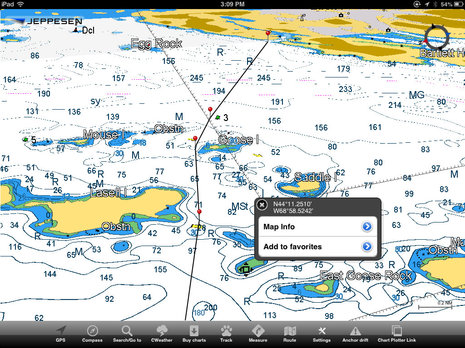