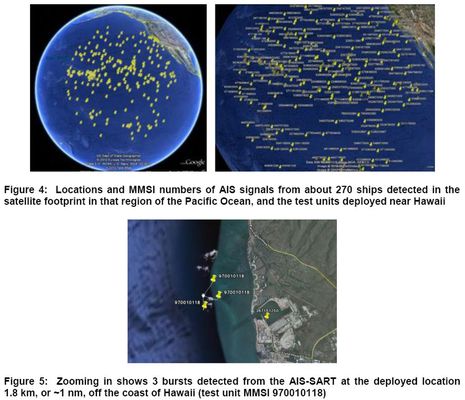 While exciting things are happening on the frontiers of AIS, there’s still some tragic ignorance about what the technology can do right now for marine safety, even from folks who should know better.  But let’s start with the good stuff, right?  After a recent entry about using compact AIS SARTS as crew overboard devices, USCG analyst Jorge Arroyo bombed me with documents about this and other AIS developments.  I was aware that AIS SARTS have done well in testing with ships, planes, and helicopters, and I also knew that certain satellites were able to receive AIS signals, but who knew that there were “microsatellites” that can pick up a 1 Watt SART attached to a floating life vest from 1,100 miles away?…
You can download the test report PDF here {sorry, PDF gone}, and learn more about the sat system developer exactEarth here.  You’ll see that their focus is monitoring regular AIS traffic (hopefully for a large number of commercial and governmental subscribers), and that the system is far from complete. And while there may never be enough microsats buzzing around to keep timely watch on AIS SARTS everywhere, just the fact that it’s possible boosts the technology in my view (though of course I’d still like to see how well a waterborne SART works when you’re trying to plot it from a small vessel in big seas).

Another source of advanced AIS info was a comment about Right Whale app monitoring from researcher Kurt Schwehr.  I’m still gawking at the IMO’s Guidance on the use of AIS Application-Specific Messages PDF he linked to.  Again, I knew it was possible to use AIS to distribute more than collision-avoidance information, and that weather and tidal current buoys were already being tested…but I hadn’t thought about all that these ASMs might do.  Somebody did!  Besides a shore tower broadcasting endangered whale Area Notices, consider the regulatory value of an extended vessel static data message in which ships declare each piece of SOLAS required safety gear aboard, and its operational condition.  How about messages describing real time harbor traffic signals, or ice boundaries?  Or a berthing data message that can be a request if sent from a vessel, or an offer if sent from a “Competent Authority”?  Many ASMs, of course, won’t be relevant to recreational vessels, but I think we can all take comfort in what advances like this say about the level of confidence in AIS and its extendability felt by the authorities who control it.
Unfortunately, though, the many uses of AIS can lead to confusion, which brings me to the “bummer” part of this entry… 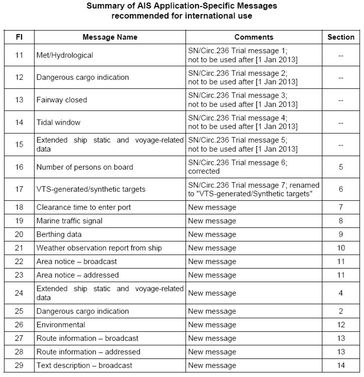 Part of the reason I attended the Maine Fishermen’s Forum last Friday was to take in a seminar about the possible effects of the USCG Authorization Act of 2010, as I’d recently heard that this long-delayed bill gave the Guard the guidance, funding, and power to enact possible safety regulations like mandatory EPIRBs or PLBs on all vessels going a certain number of miles offshore.  Well, the seminar was largely about possible new fishing vessel inspection requirements like load lines and formal classification for new builds over 50 feet (meaning that if the ground fishing industry up here ever does turn around, there will be lots of wide 49’6″ offshore trawlers ;-).
But I did take the opportunity at the end to ask if there was any news about the expanded AIS carriage requirements that have been in the works for almost two years, and include over 5,000 fishing boats over 65′.  First one USCG presenter told me that fishing vessels were exempt from AIS with no changes planned.  Then someone in the audience who had apparently represented Maine fishermen in AIS talks sometime in the past told me that the industry stance was that vessels which already had Vessel Monitoring Systems should not be required to install a duplicate identity system.  When I said — nicely, I think — that VMS didn’t do any good for collision avoidance, the other USCG representative said in no uncertain terms that “AIS is more of a Homeland Security instrument than a navigation safety instrument.” When I brought up the IMO and all those ships going around the world with AIS — still nicely, I think — he boomed out “I don’t care what people have told you, AIS is the result of Homeland Security.” Yike!
It’s understandable why fishermen, and most all industries, are defensive about government mandated equipment. And while the Department of Homeland Security certainly didn’t invent AIS, it does value the technology for coastal security as well as collision avoidance, which may be confusing. But I’m pretty sure that the job description of the man so misinformed about AIS includes advising fishermen about safety issues. And I’m not sure he has a clue that there are such men who might be alive today if they had adopted AIS, like the crew of the Lady Mary, which just doesn’t seem right.