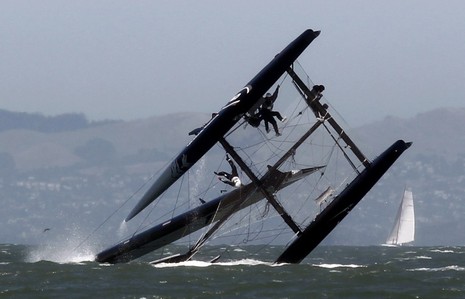 Last week in San Francisco, Russell Coutts probably did the America’s Cup racing program a great service when he not only capsized an AC 45, but personally took a dramatic header right through its wing sail, all before a fleet of press boats!  You want to see the video.  Heck, Charlie Doane admits to watching the crash “about fifty times” and looking forward to more. I like a shot of NASCAR in my sailboat racing, too, but I’ll bet that an equally important element in making this sport more popular will be the broadcast TV wizardry being spearheaded by the remarkable Stan Honey…

Stan Honey has had an astounding career as an offshore racing navigator, perhaps best laid out in this Sailing World interview with Herb McCormick. But note that he’s also the visionary engineer who gave sports fans “the now ubiquitous yellow first-down markers in football games and virtual strike zones in baseball telecasts, among other innovations.” Honey is also the guy who invented SailMail!  So who in the world could possibly be better to give coverage of the America’s Cup better graphic intelligence and zing?
And apparently that’s exactly what’s happening, as brought to my attention by the New York Times yesterday. I also found this excellent video interview with Honey while he was working on the AC broadcast and tracking system — which evidently will also be used by the race judges — in New Zealand. And according to this NASailor blog entry, Honey’s system will track the AC catamarans (and the camera copters) with inches accuracy 10 times a second.  Are you psyched or do you still think “sailboat racing is like watching paint dry”?
Now, who’s going to help Panbo readers see — or at least know a little about — the marine electronics innovations that will help those fast cat sailors best play the courses and conditions? 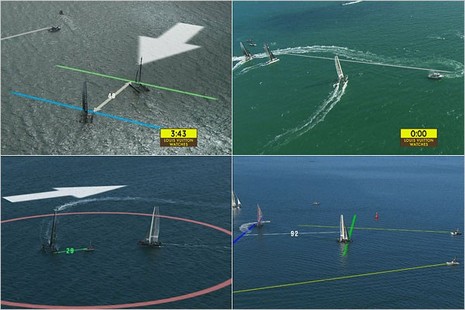