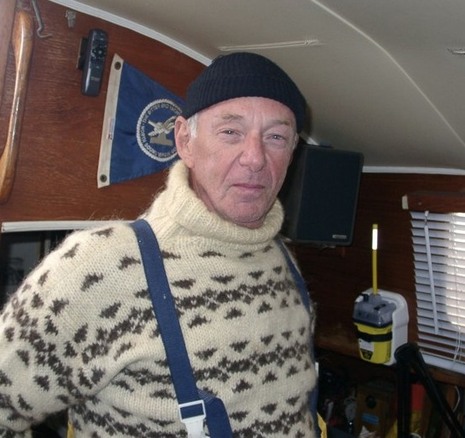 I like this picture of Chuck — found on his family web site, along some truly touching memorial material — because whenever I saw him at boat shows he was almost invariably decked out in a blue blazer and tie.  Now Mr. Charles Husick certainly had the gravitas to support a bit of formality; he was an accomplished electrical engineer who had also managed serious companies, written hundreds of magazine articles, and been a important advocate for sensible marine technologies…and he knew more about many subjects than many of us know about one.  But he was also a real boating enthusiast, and in this picture I can sense that large, curious intellect that must have had so much fun geeking out on his ketch Bonne Étoile…

And Chuck’s boat love may have been mutual, as reported by his son Lawrence: “If an inanimate object can be said to mourn, she is doing so. I know,
because the genset and bilge pump have stopped working!”  Lawrence — who seems to be a chip off the old block in terms of wry humor and writing skill — also shared the story of Chuck’s fatal illness, and here’s the detail that got me:

In late Summer, Dad decided to switch over to peritoneal dialysis, which
while it must be done more frequently, can be done at home, and is much
more gentle on the system.  As with all things, Dad focused on the poor
design of the cycler pump that he was using, eventually deciding that
he would perform dialysis manually while he talked with me about how to
redesign the pump.

Had he made it, I have no doubt that Chuck would done something about that pump design; he was man of opinion and action.  This AVWeb piece speaks of his importance to the general aviation community, while I think Michael Sciulla (formerly of BoatU.S.) nailed Chuck’s place in the recreational boating world at Sounding Trade Only.  You’ll see tribute comments to Chuck from many in the marine electronics industry at these sights, and I dare say many Panbo readers have fond memories of him.  I for one will never forget the encouragement and praise he sent my way, even when we sometimes competed for writing gigs or awards.  As a marine journalist, I believe Chuck cared most about getting solid, useful information to boaters, and that’s an attitude we should all try to emulate.
We will certainly be thinking of Chuck at the NMEA Conference next week, where last year he and I, and Dean Travis Clarke, served as the writer judges for the first Technology Award.  Man, didn’t we have some constructive, and enjoyable, arguments!  It’s fitting that this year Chuck’s place will be occupied by Tim Queeny, who — like me — learned a lot from the man. 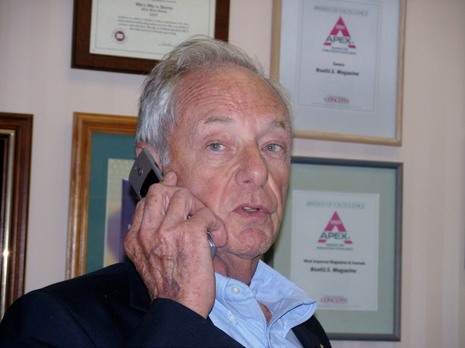