The Dorcy Cyber Light (model 41-4750), list price $29, or $18.50 on Amazon is an ideal flashlight for boating, deserving of a best flashlight award from the crew of my Wednesday night racing team who assisted with this article by comparing six flashlights under a variety of nighttime conditions above and below deck on my 39 foot sailboat.

This flashlight stood out for its effective light distribution, 180 lumen brightness, boat friendly rubber housing, ease of use for long periods of time, and the five hours of life from standard batteries. If you’re looking for a waterproof light, this isn’t, but it can take a splash and is otherwise ideal, taking first place in a field of 15 flashlights.

For this article I engaged my Wednesday night racing crew, familiar with my frequent flashlight purchases, as a panel of judges to choose among the six better flashlights of the 15 accumulated over the last two years. Each flashlight was evaluated over two Wednesday nights, both on the water and at the dock after our evening’s race activities. The second Wednesday included a bonus evaluation in moderate fog that rolled into the harbor while we were at the dock determining the winner. (Thank you Roy, Marcey, Janet, Brian, Katherine and George).

Lights that were not among my six better lights included spotlights with proprietary rechargeable batteries. Virtually all rechargeable flashlights had warnings to unplug them after they are charged, which to me is ridiculous. Without a plug and forget charger, the batteries will be damaged if owned by me. Unfortunately, you don’t learn about this limitation on most lights until after you open the packaging. An example of a light with a plug and forget charger is the Q-Beam Blue Max 2 million candle power spot light that also is an all round quality build and has excellent focus, but was eliminated due to it’s hefty weight.

Also not making it to the competition were wired spotlights that plug into my purpose- mounted bow and stern 12v sockets. Three versions of this type light fell into disuse for various reasons, not the least of which, they were heavy (including the cord) and tiring to use continuously on our 20 minute voyage from the bay to the dock. Also eliminated were numerous 1st and 2nd generation LED flashlights ranging up to 10 lumens that look bright close up or in the cabin, but are ineffective outdoors. 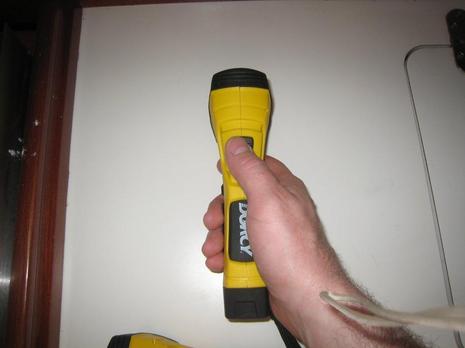 The 180 lumen Dorcy Cyber Light above provides a powerful beam of light that is effective for searching for objects on the water and effective on the deck for various sailboat tasks. It is shaped and textured to make it stay where you put it (won’t roll), and if dropped won’t break or damage the deck. The recessed push button on/off control is waterproof and easy to operate with a gloved hand. The light beam is fixed to be fairly narrow, with no focusing feature. It is very bright at 2 feet across at a distance of 10 feet, and throws off plenty of lower intensity light up to a width of 5 feet across, making it useful for repair jobs where you place it pointed at what you’re working on. At 200 feet, the main beam is bright and about 20 feet across in width, with little additional light noticeable on either side of the main beam. It left me wanting for a bit wider beam, but within that 20 foot wide area, it is very bright. The benefit of the narrow beam is an advertised range of 275 meters (900 feet) and our experience of 50 to 200 feet in fog mentioned below has me believing that the narrow beam is a good thing, putting 180 lumens to the best use in a marine environment.

The narrow beam had me wondering if the 500 lumen Dorcy rechargeable with its wide beam and higher output would be favored by the judges. The LED bulb makes it possible for the product to have a light weight rechargeable battery, and overall would seem ideal to find things quickly in the vastness of the sea at night. It lights up an area almost 200 feet across at a distance of 500 feet, and shares many good features with the Cyber light, also covered in a bright yellow casing that makes it hard to loose, is shaped and textured to make it stay where you put it (won’t roll), and if dropped it won’t break or damage the deck or itself.

There were three undesirable affects of the larger 500 Lumen Dorcy however, that not only lost it the competition but eliminated it from being a runner up as well. First, when my crew used the light it would demolish my night vision, even when pointed straight ahead. Light reflected off my furled headsail and other surfaces was quite bright even from 30 feet back at the helm. I would then become dependent on where the light was pointed to see anything, I couldn’t even see my fingers on the wheel. Secondly, with such a wide beam, it was hard to avoid lighting up every boat in the channel which was potentially rude as well as a safety hazard for us if we were going to blind other boaters. Lastly, our second night of testing was in moderate fog, at which point my crew took an intense disliking to this light as the wide beam appeared unable to penetrate the fog, but very good at blinding the user due to the intensity and wide beam of light reflected back off the fog. The light was booed by the crew and eliminated from the competition last minute due to its flash back in the fog.

Comparably, the narrower 180 lumen Cyber Light was effective at fully illuminating objects 50+ feet away in the same moderate fog without blinding the user, and did barely illuminate a mark almost 200 feet away (normal range is 900 feet). The Cyber Light earned many extra votes as there was somewhat of a wow factor as the crew searched for objects in the fog seeing how distant it can go, knocking the next closest competitor, a $65 200 Lumen Coast T7 Speed Focus flashlight, out of contention. Mind you, at more than 50 feet all we really got back were vague reflections. It didn’t really cut through the fog that much, just better than the other flashlights. In such situations perhaps you would really want a FLIR.

Other things I like about the Cyber Light is that it is powered by standard AA batteries, runs for over 5 hours, and gives you more than an hour warning that you’re nearing the end of the battery life. At that point it blinks a lot (as if a wire is loose) but is very usable until you get around to loading another set of batteries. It uses four batteries, which is a convenient number if using rechargeable AA batteries on chargers that charge batteries only in pairs.

I have found this light handy on my dinghy as well, for the same reasons as above, plus if I desire to get another boat’s attention, the narrow bright beam has been effective at getting the attention of approaching power boats.

On the downside, the overall tough and waterproof appearance of this light isn’t enough to prevent water from getting into the battery compartment of the Cyber Light that lives in my 9 foot dinghy. It experienced corrosion of the battery terminal within four months of use. But at $19 and so much going for it, I went ahead and replaced it with an identical light.

I own five of these Cyber Lights now (three on the sailboat), with every other flashlight voted off the boat except for this Dorcy work light, picture below, which is ok for lighting up the cockpit when we have guests. The Cyber Light actually makes a better work light, but when I need a wide beam for something like a cockpit light, I like that this light can be plugged in for extended periods of time without damaging the battery.

– Dan Corcoran is an avid sailor and leads ServiceSPAN, a back office work center technology and process improvement company. 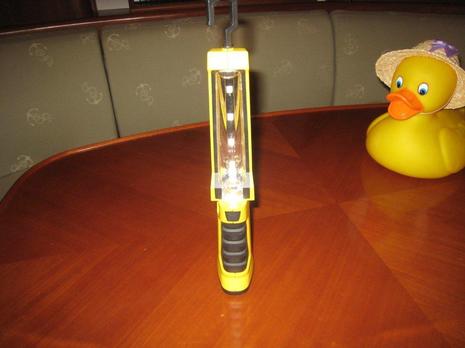