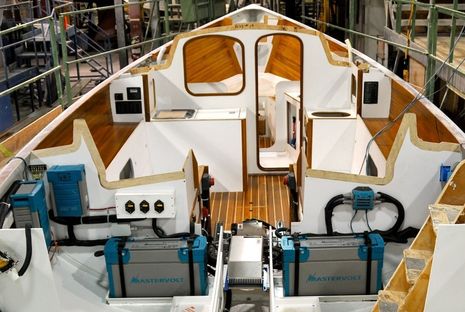 How about three cheers for Vincent Argiro, and guys like him willing to enthusiastically test the bleeding edge of marine technology.  That’s his first boat above, an Alerion Express 33, which is also the first Pearson ever fitted with an electric propulsion system.  Those are twin MasterVolt 24V 160Ah LiFePO4 batteries and 60a ChargeMasters feeding a 7.5kW DriveMaster motor also supplied by MasterVolt since it acquired e-propulsion specialist Bellman.  And the rest of Velica’s systems aren’t too shabby either…

Argiro, who already had background in biotechnology, worked with Pearson’s Wayne Burkett on the systems design, and I was pleased to hear that Panbo entries and comments were useful for his research.  For the rest of this entry, I’ll mostly use clips from Vincent’s emails over for the past couple of months, in which he detailed the gear, what does and doesn’t work well, and why the whole project was worth the effort:

I have instrumented the boat fairly heavily, since is something of a research platform for this configuration. It has an NMEA2000 backbone, Garmin 6212, VHF 300AIS, and two GMI 10’s, Airmar DST800 and PB200. It also has a link between MasterVolt’s proprietary MasterBus and the N2K bus, a direct USB link to the MasterBus, a MasterVolt GPRS wireless monitoring interface (not yet up and running), and an ActiSense NGT-1 N2K to USB link. I just bought an HP Mini 110 as a dedicated logging and diagnostic platform for the boat.
I get lots of quizzical looks from people in the marina as I glide by in silence while maneuvering. Getting into and out of my very tight slip has become easy now, even single-handed. The intuitive and instantaneous response of the throttle is perfect in these spots.  I can stop the boat on the dock within inches of my target, and just step off with a line
in hand.  Motoring longer distances has been easy too.  Range is sufficient, but does require some attention to budgeting the battery, if one needs to go
more than 12 nm at a stretch. Slowing down to 4 knots extends range substantially, if needed. Noise is a little greater at cruising speed of 5 to 6 knots, but is just the low rumble of the prop noise. The motor itself is truly silent. 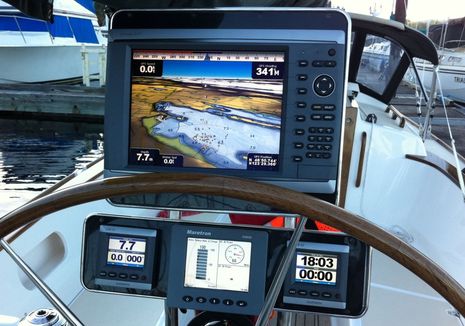 Note that the Maretron DSM250 above was just recently installed because the Garmin gear couldn’t deliver the exact power information Vincent was hoping for.  I asked him to detail the issues, hopefully so that Garmin and other manufacturers will adapt to the needs of future e-propulsion users:

The most crucial quantity not being shown by Garmin is battery “State of Charge”, contained in PGN 127506 – DC Detailed Status. However, I recently discovered that they DO support PGN 127508 – Battery Status, AND compute a power measure from V and A. However, they give power in watts, rater than (decimal) kW, and the display only reads up to 1000 watts– not useful for tracking the propulsion motor consumption. Also, they use the default update rate of only 0.67 Hz, which is too slow to monitor engine performance in real-time; and there seems to be lag in the V, A, and P values, as if they put in a long smoothing time constant– about 2-3 seconds!
Being impatient for better numbers at the helm, I have bought a Maretron DSM250, since it DOES display SOC and just about every other PGN under the sun.  I plan to replace the central display supplied by MasterVolt/Bellmann (manufactured by Curtis for forklifts, etc.), which does not correctly display SOC, and only shows motor power to the nearest kW — insufficient precision to gauge motor consumption — as well as RPM. I can do without RPM until MasterVolt completes a planned integration of the motor controller with their proprietary MasterBus. Since I have their MasterBus to N2K interface, that is how I can get all the motor parameters and battery parameters on N2K– it is a slick device (with some caveats).

{After testing:}  The new Maretron DSM250 installation works great at the helm!  I had to motor home about 7 nm last evening after the wind died, and it was really good to be able to monitor the motor and battery in real-time, finally! 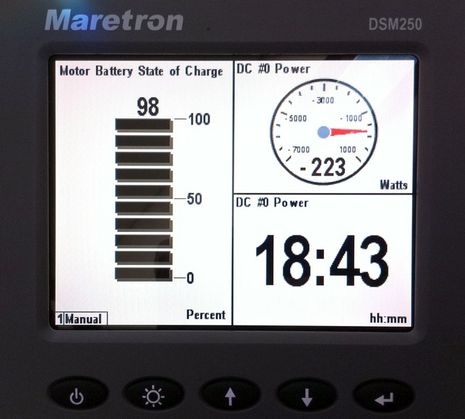 One unexpected bonus is the ease of what I call “equilibrium motor-sailing”. If one is travelling in lighter and more fitful winds, one can easily add a little throttle from the motor to stabilize forward speed. When there is a lull, the motor drives the boat along more. When a gust comes, without adjusting the throttle, the motor’s current draw falls first to zero, then reverses as the wind-driven prop spontaneously becomes a hydro-generator.
We are still working on getting full regeneration (neutral throttle) under sail to work reliably with the Seahawk AutoStream feathering prop I chose with an eye toward racing. Some tweaks of the prop pitch and motor controller programming are ongoing to get this to be a practical contributor to bulk charging of the batteries. This is the key to enabling secure longer-distance cruising. 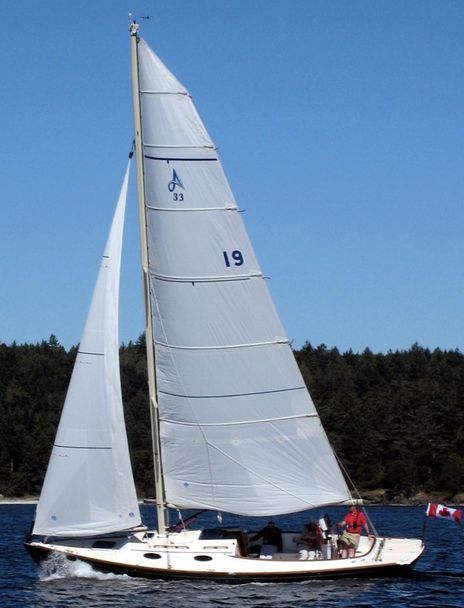 For anyone with a sport boat, club racer, or who primarily does daysail/weekending, this is the way to go for sure. It is such a pleasant way to keep sailing more pure, both aesthetically and environmentally.  In BC, the environmental argument is that much stronger, since 70% of our electrical power is already renewably generated, and a full charge of the 8.6 kWh MasterVolt batteries costs about 65 CENTS!  These LiFePO4 batteries are extremely stable and safe, and have an 80% available depth of discharge, so energy density is nearly three times higher than AGM. Cycle life is expected to exceed 2000 deep cycles and overall life to exceed 7 years.
Sailing is a highly aesthetic pursuit, and one of the oldest most elegant technical disciplines we humans have. It always seemed horrible
to me to have to ignite a smelly and noisy engine at the beginning or
end of a great day of sailing, or when the wind was insufficient.
Electric propulsion has SO many advantages over internal combustion
engines– high efficiency, no flammable fuel on board, no risky
refueling, no smell, no pollution, high instantaneous torque, compact
size and more flexible placement options, regeneration potential under
sail, and more. The ONLY disadvantage, in my mind, is limited range. But
even that is now becoming less significant with lithium battery
technology. So for a boat primarily used for daysailing and racing,
there is NO reason not to go electric! 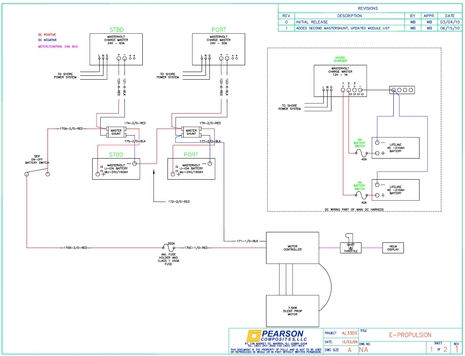