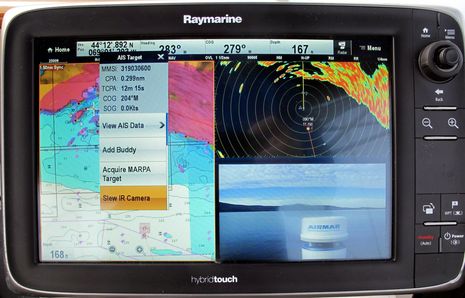 I’ve long thought that the usefulness of a navigation camera would increase significantly with tight integration to a boat’s principal navigation system, and now I’m convinced. When I redid Gizmo’s antenna mast last spring, I got to top it off with a powerful FLIR M-618CS dual camera system that was sometimes very handy as I cruised up the coast. But when I finally got around to integrating it with the Raymarine e-127 above, its safety value took a quantum leap. While it’s obvious from the lower-right camera window that this particular test day was very clear, also obvious to me was the camera system’s potential as I can make it quickly pan and tilt to any spot on the chart screen, on which it will stay locked no matter how Gizmo manuevers and — in the case of MARPA and AIS targets — regardless of how the target moves… 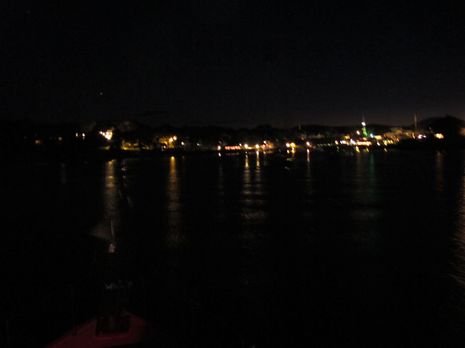 Before getting further into the FLIR/Raymarine integration, I’d like to make some general observations. It’s hard to take good photographs of what poor visibility actually looks like, let alone good photographs of video screens working in poor visibility (and unfortunately most MFD screenshots exclude video pixels), but the images above and below this paragraph came out pretty well. The top shot (click on it for full size) is a fair representation of what it’s like to negotiate the buoyed channel and large mooring field outside Camden Inner Harbor in the dark, which is why few boaters ever do. Meanwhile, the image below — taken moments later — shows how well the FLIR thermal camera saw through that darkness and even the flare of shore lights that would have made a lowlight or light intensification camera fairly useless. (My salty old buddy Joe McCarty could barely believe his eyes.) 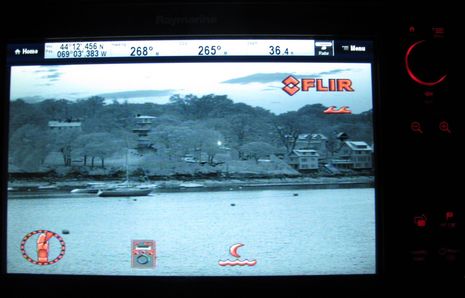 Another thing about the detail seen in the image above is that I’m pretty sure it’s better than what I saw coming from the same FLIR 640 x 480 microbolometer in a similar M-626L test camera back in 2009. This speaks to the fact that there’s some serious software involved in turning sensed heat into a visual image, and that FLIR’s is getting better (PDF about DDE here). Note also how the 18°-wide thermal image above covers only a fraction of the 28mm digital camera view at top, and that the top three thermal cameras in the M-Series line each has a different FOV (field of view), because (I suspect) none is perfect. 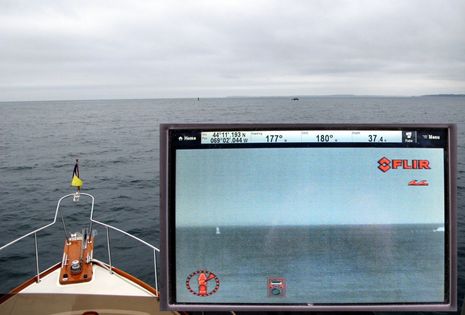 The collage above illustrates the same concept. I’m looking down Penobscot Bay at a nasty ledge, appropriately named “The Graves,” and a nav aid that guards one side of it. I know the thermal camera could see both items well in the pitch dark or the sun’s glare (anything but heavy rain or saturated fog), but could I find them with the cam’s fairly narrow FOV? Which is one reason that MFD integration is such a big deal; tap and “slew to cue” on The Grave’s charted location or its radar signature, and the cameras will whip over to that spot and lock on while you have a good look. 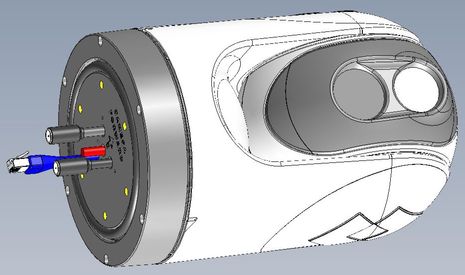 So how exactly does a FLIR M-Series integrate with a Raymarine MFD? Well, the easy way would be to simply get the same camera with a Raymarine sticker on it, but I wanted to start with the FLIR standalone version, mainly because it can be similarly integrated with the Furuno and Simrad MFDs also being tested on Gizmo (and maybe other brands to come, even though FLIR owns Raymarine). The technology that makes this integration relatively easy is an Ethernet IP interface called FLIR Nexus (Panbo discussion here). Note, though, that the M-Series cameras themselves do not output Ethernet IP, but rather the standard co-ax analog signals that work with most every current MFD and monitor video input. More on this subject below… 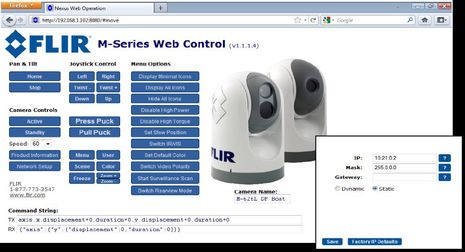 At any rate, it was fairly easy to plug the M-618CS ethernet cable — which was communicating with, and powering, an M-Series JCU (joystick control unit) — into a laptop and then browse to the Web Control page seen above (just don’t bother trying it with Chrome). Obviously, the web interface can be used to run the camera system, but I went to the Network Setup and gave the camera the static IP address specified in a Flir instruction sheet. Then I just plugged the same cable into Gizmo’s Raymarine SeaTalkHS (Ethernet) switch and it worked. I could also add one or more JCU’s to the Ray network by giving them static IP addresses (and PoE sources), but given Gizmo’s helm ergonomics and Raymarine’s complete camera interface, I don’t think alternative controls are needed. 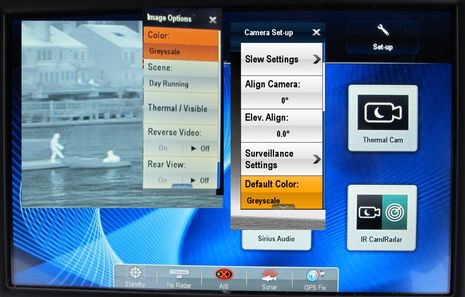 The funky image collage above is an attempt at illustrating the Raymarine interface to the M-Series. As soon as the system was added to the network, the main menu “Thermal Cam” button worked, and I could also create custom screens with “IR Cam” windows (the different default names are a little odd, but custom buttons can be renamed anyway). Now I can pan, tilt and zoom the cameras with the touch screen or with the knob and joystick, which also gives me fast access to the menus. Items you might commonly change, like flipping between thermal and visible (daylight/lowlight) cameras, are on top, but you can dig down to every setup item possible, like how large a sector the automatic surveillance mode will pan, and how fast, or alignment tweaks for the slew-to-cue features.
For me, all the controls were easier to understand and use with the e-127 MFD than the JCU, though the latter is not bad. The same was true of the Raymarine e-7 at the lower helm (the M-Series has two analog video feeds, one with just thermal and the other with both video streams).  Note how well humans stand out in regular “white hot” thermal greyscale imagery, while the Camden outer harbor scene further up shows how Reverse Video, also known as “black hot,” can look more natural (I’ve yet to find much navigation use for the colorized temperature mapping, but maybe someone has).

The screen that begins this entry shows the Ray/FLIR system just before it slewed to an AIS target about 1.5 miles away, and the larger image above shows the results once I’d used the Window button to make the video full screen and then applied 2X digital zoom. The inset is what the tracked target looked like when I got much closer. Note how the running generator location is revealed, because we’re looking at heat, not light. 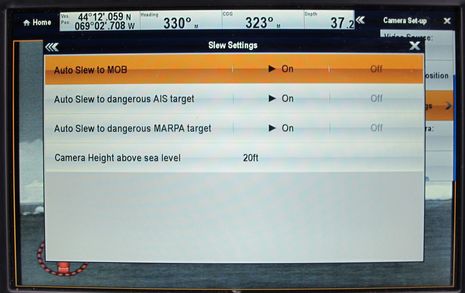 Raymarine’s Lighthouse V7 operating software — which notably runs on all a-, c-, e- and gS Series MFDs — also supports automatic slew-to-cue on certain critical target types. I’ve only experienced the MOB auto slew so far, because I pushed the alarm and was surprised that the cameras seemed to point straight down. I only realized later that an MOB alarm presumes that the person went over exactly where the boat’s GPS is, which in Gizmo’s case is almost directly below the antenna mast. A better test, perhaps with an AIS MOB device, is called for!
So far, the only notable pan/tilt/zoom (PTZ) camera integration feature that isn’t yet supported by Raymarine is the visual FOV overlay I’ve seen demonstrated on the Furuno NavNet TZT (and in higher-end MaxSea and Nobeltec TimeZero PC charting programs). I suspect that the feature feels like another leap in making nav cameras work easily and well with the navigation process, and I look forward to trying Gizmo’s test TZT with the M-Series and also with the test boat’s Simrad NSS, which got FLIR camera integration with the recent V3 software update. I saw it demonstrated during the NMEA Conference (using the new NSO evo2) and while the integration is not yet quite as complete as the competition’s, I’m sure it will get there. Isn’t it nice to think that a boater might switch his or her primary navigation system and still use an existing nav camera system, which might well be the most expensive electronics item on board?
I’m happy to add that there’s news coming regarding the high price of thermal technology, which will be the introduction at the Fort Lauderdale show of a “super low-cost, fully controllable, thermal/daylight dual payload PTZ” Nightrunner camera system by Iris Innovations. I think it uses Ethernet for both control and video distribution, too, and I’ll be there with lots of questions. I’ve not heard anything for sure yet, but Lauderdale may also mark the inevitable introduction of FLIR and/or Raymarine branded plug’n’play IP boat cameras, given that FLIR acquired Lorex last year and Ray’s Lighthouse 7 already includes neat record/playback features for attached IP cameras.
I can’t help but conclude that at least easy-to-install-and-use daylight/lowlight PTZ nav cams will soon fit into many boat budgets, so I’ll finish with some images showing the zoom capabilities of the FLIR M-618CS’s “visible” light camera. Appledore is the schooner in the distance just tying up with main and foresail still up. It’s like having Popeye at the masthead with a good spyglass, except that you don’t need to supply spinach. And yes, it’s true, I could have been peeping around Camden Harbor like this while laying in my bunk using the RayControl app on a tablet. 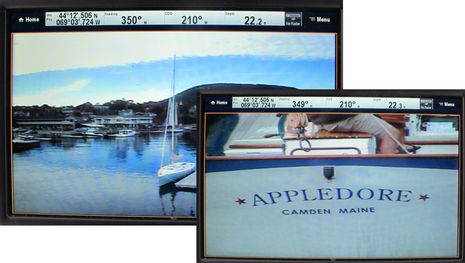