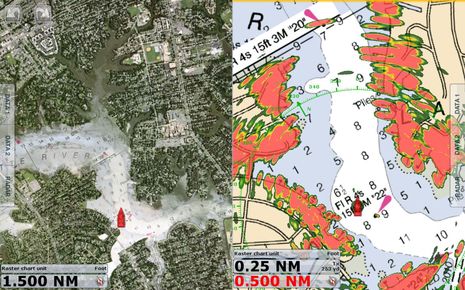 One problem with cruising north early during a late spring was that Gizmo’s open fly bridge was usually too cold to work with electronics like the Furuno TZT14 that I’d installed there just before finishing the trip south (as seen in this photo). I look forward to much more testing here in Maine but this I already know: For me, there is no other MFD or PC navigation program that does underway chart plotting so well. TimeZero software from MaxSea and Nobeltec are obviously excepted — and note that TZ for iPad is on its way — because Furuno essentially built the NavNet3D and TZT series as very specialized marine computers that run TZ with tight integration to their radars, sounders, etc. as well as to NMEA 2000, Ethernet and analog cameras, and more. Let’s look at some screens that illustrate what TZT does so well…

First, let me encourage you to click on some of these screens to see them in their full 1280 x 800 pixel glory. And whereas your display is probably denser, remember that the TZT 14 spreads these pixels across 14.1 inches with bright LED backlighting. There is also a certain “aliveness” to a TimeZero display that’s hard to describe. Videos at Furuno’s NavNet site and on YouTube (check out FurunoDan) nicely illustrate TZT’s fast and smooth chart handling and multi-touch controls, but I’ve yet to find a video that really shows TZT well underway. It’s almost as though the imagery responds not only to the boat’s COG but slightly to its pitch and roll. Garmin does something similar and I think it helps make the chart plotting relate better to the real world around you… 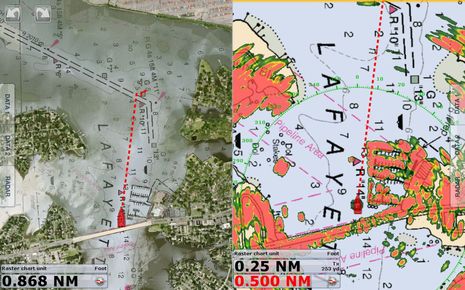 What the screenshots do illustrate well how the super high-resolution satellite photo maps with “PhotoFusion” (that are unique to all the TimeZero products) work toward the same goal. I almost invariably use this overlay, at least in one window, as it gives me much more detail about what’s going on ashore and in shallower waters without badly obscuring the essential chart data. Note how the screens above show Gizmo about to get underway in Norfolk’s Lafayette River and then having just passed beneath the low bridge that required a special air draft sensor. Incidentally, the NOAA raster chart seen on the TZT without overlays provided the easiest and surest reference regarding the bridge’s height on my way in, one of many reasons rasters are often my preference. Note too how well the little Furuno DRS2 radome — last discussed on Panbo here — is doing in close quarters. The Navico solid-state 3G and 4G radars may shine in these conditions, but the high-end HD domes from Furuno (and Raymarine) do pretty darn good. 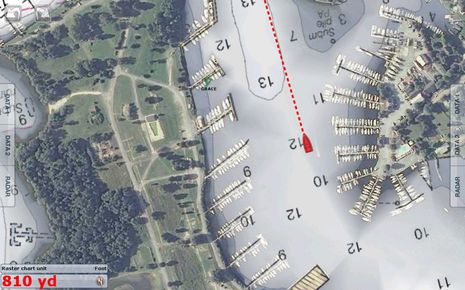 Above is another example of PhotoFusion at work, here arguably indicating what you’ll actually find in lovely Solomons Island better than any other photo/chart mashup I’m familiar with. In fact, it helped me anchor right near the Calvert Marine Museum I much enjoyed visiting. 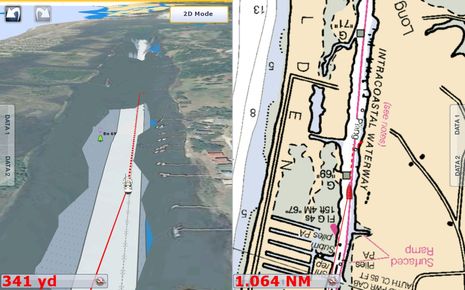 Properly mixing photos with charts is not easy, however, and in the tight confines of the ICW I saw a fair bit messyness like that in the left window above. It’s definitely made worse by the 3D mode you can instantly invoke and control with a two-finger gesture (or RotoKey command) but often I like TZT 3D as it too helps unite the plotter imagery with what I was actually seeing, and maybe concerned about, as Gizmo moved through unfamiliar waters. 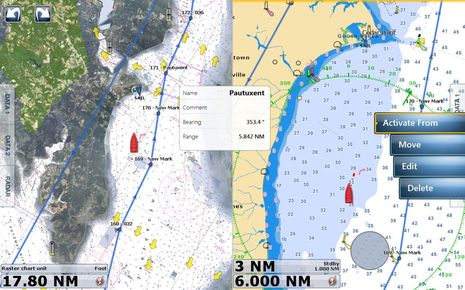 The screen above was taken just south of Solomons where I noticed that some electronic charts did not do a great job of notifying you of that restricted target area just behind me. The NOAA raster and the Jepessen C-Map both did well, while the NOAA ENC seemed surprisingly the worst. Also seen is how easy it was to start a route (previously imported as a GPX file) at a particular waypoint I tapped, as well as the TZT’s slick onscreen tidal level and current graphics. 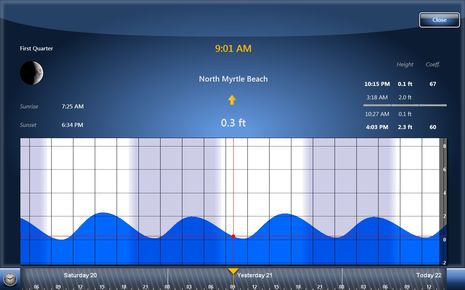 Tapping on tide and current icons is also one way to get to prediction screens with a certain elegance and utility that you’ll find a lot in TZT, though it is true that some other MFDs can also calculate the local rise and set of the Moon. 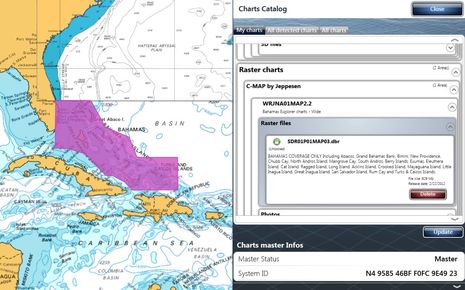 Getting back to charts, I’m impressed with the catalog facility that’s built into TZT, which is much like what you’ll find at MapMedia, the MaxSea subsidiary that processes all the different chart formats, photo maps, and bathy info that can display in the TimeZero family. The loaner TZT14 came with two loaded 64 gig SD cards and it’s easy to see what’s on them. I have not yet tried to update any of the data but I understand that Web downloads have gotten easier and that there is a MM3D hard disk available. I still suspect that the extra MapMedia processing puts a lag between, say, actual NOAA updates and MM updates but many chart systems are hard to keep truly current (with some notable exceptions like Coastal Explorers automated NOAA updates and Navionics Freshest Data). 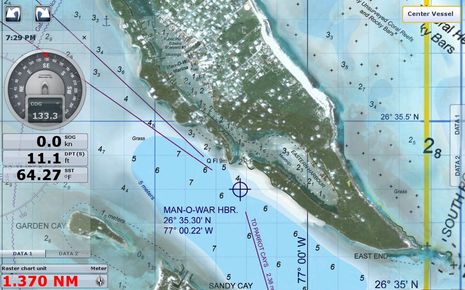 I’m also not sure about MapMedia high res photo map coverage beyond the U.S., but the screen above also showing a Jeppesen Explorer raster chart for the Northern Bahamas looks great. 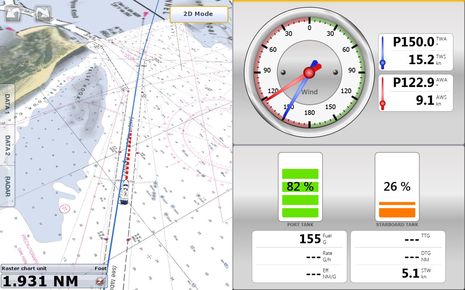 While this entry is mostly focused on TZT chart plotting, these last screens also show how data can be shown in dedicated windows like the ones above and in the easily popped-out and customized data overlays like the one seen in last image. Note above that once I’d used a CZone module to translate Gizmo’s tank senders to N2K, at least the two fuel levels were available in TZ and I could name them Port and Starboard (instead of the “0” and “1” instance names native to NMEA 2000). 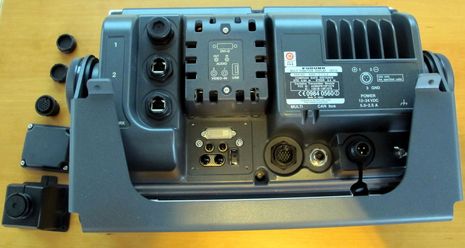 Let’s also note how incredibly rugged the TZT hardware is. Its depth could be problem for some flush installs but have you ever seen a bracket anywhere near as heavy duty? The two-wire power cable is 3/8-inch in diameter due to three layers of insulation with a steel mesh protective jacket sandwiched in. That’s the Furuno way, and it almost seems weird to see it combined with charting plotting that’s functionally beautiful nearly to the level of artfulness (I think). I hear people moan about the TZT 14’s $7,695 retail price, but it seems that the bigger Garmin Glass Helms are in the same ball park and so may be the Raymarine gS Series. With both those systems about to get real, the premium glass bridge MFD niche is going to get interesting…and who will be surprised if Simrad soon refreshes its NSO line?
Deciding among the Big Four will likely become tough, though without a significant down side as all of them seem to be working on the cutting edges at this point. (Promising details that come to mind are the multiple NMEA 2000 ports on the Garmin Black Boxes and the multiple Power Over Ethenet ports on the Ray gS.)  But here’s hoping that lots of developers some time underway with a TZT, and also that TZ can be made to shine on an iPad so that many boaters can experience it. 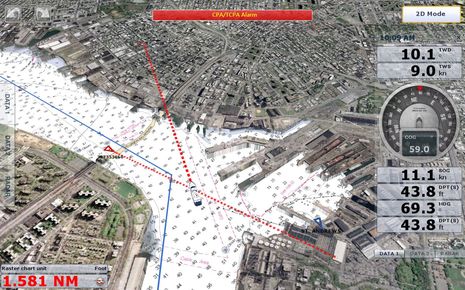