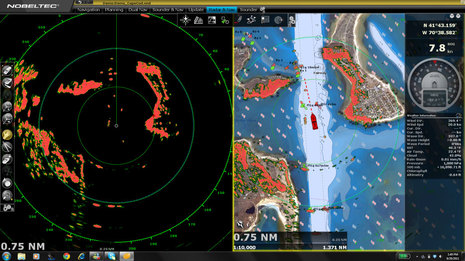 Nobeltec Furuno PC-Radar was announced at the Miami boat show, but I don’t think it’s gotten the recognition it should. Yes, it’s like the Furuno MaxSea PC Radar that came to Europe in 2013, but now the feature/cost proposition seems to fit a wider range of boats, plus it’s actually available over here. It’s also noteworthy that Nobeltec’s TimeZero v2 app is now out with support of Furuno WiFi radar and it’s interesting to see how these two radar solutions compare. It looks to me like Nobeltec and Furuno are blazing two distinct paths to primary limited visibility navigation without multifunction displays… 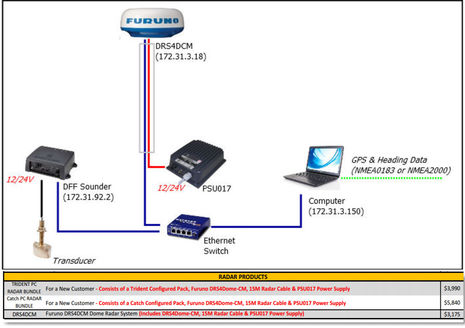 For a suggested retail of $3,990, a PC Radar bundle gets you Nobeltec TimeZero Trident software and a Furuno DRS4DCM 24-inch 4kW UHD radome complete with cable and power supply. You have to provide the computer(s) and screen(s), but dual nav stations are easily possible because Trident includes two licenses (and/or you can, say, run a mirror screen with touch control in the cockpit or on the flybridge). A Nobeltec Sounder Plus Pack ($400 at P2) and Furuno black box is required to get the system diagrammed above, but for many mid-size vessels the PC Radar bundle seems roughly competitive with, say, a nice bundle of Simrad NSS12 evo2 and 4G radar. 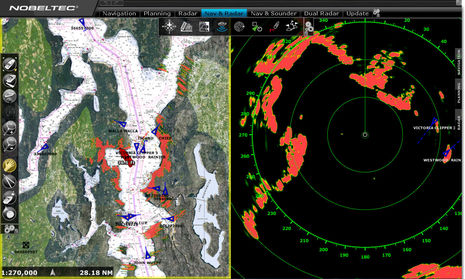 Distinctly unlike the Furuno 1st Watch DRS4W WiFi Radar that I saw demonstrated last October, the PC Radar DRS4DCM includes the complete feature set of Furuno’s venerable DRS4D. In the screen above, for instance, the overlay and standalone radar windows are running at completely independent ranges, which can be very useful (especially for an experienced operator). PC Radar also has automatic 24/36/48 rpm antenna rotation speed and a powered NMEA 2000 port able to bridge some Furuno N2K sensors onto the radar’s Ethernet feed (though sailors who want to sometimes switch off the radome underway to save power should think twice about this option). 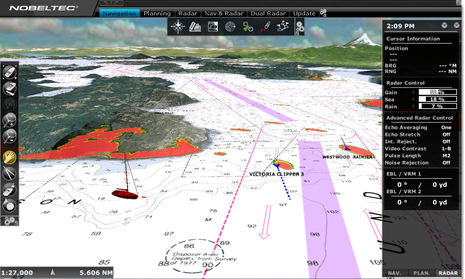 In fact, Nobeltec software can apparently do more with the DRS4D than simply replicate what’s possible on a Furuno MFD, which may be quite appealing to the sort of skipper who already leans toward the potential power of PC navigation. Chief Technology Officer Iker Pryzo told me:

We have full control of all radar parameters that you can find on an MFD. In addition we have some (more advanced) post-processing in MaxSea/Nobeltec (PC software) that are not in the MFD (more Echo Averaging levels, more Echo Stretch levels, control of the radar picture “dynamic”…) {See screen above} We also have ARPA capability. The difference is that the ARPA is not computed inside the DRS but by MaxSea/Nobeltec (software processing). We are investing a lot in the ARPA algorithm, because we feel that the ARPA that is available today (across any manufacturer) is not easy for the regular end user. More on this in a future version!

To my knowledge Furuno is already the only manufacturer offering ARPA — not MARPA, which requires manual target activation — in this level of radars. Note, too, that when I ran similar MaxSea TimeZero Explorer software networked to a NavNet 3D MFD and a DRS2D radome I described the results as “punching above its weight”. And the same beautiful, fluid raster chart, Photo Fusion, radar, and AIS integration was almost dangerously mesmerizing running on Gizmo’s Chart Table 21 setup (though I somehow misplaced the screenshots). The point is that PC TimeZero radar has been evolving nicely for quite a while, but now at about $4,000 without the MFD requirement it’s a lot more accessible. (Then again, I was happy to see in the DRS4DCM FAQ that you can later add a NavNet3D or TZTouch MFD to this system – no problem.) 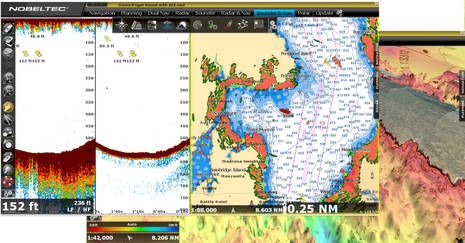 I’ll add that Nobeltec TimeZero can work with legacy Nobletec radars as well as other Furuno radars up into the FAR2XX7 series and all sorts of sonar technology, depending on version and plus pack. The screens above show simultaneous dual frequency fishfinding and radar integration and also Bathy Recorder. What the Furuno/Nobeltec/MaxSea marine electronics complex doesn’t offer (yet?) is the relatively low-cost side scanning that Navico, Garmin, and Raymarine are furiously competing over, or the Simrad/B&G ForwardScan that may become another battleground. But to my knowledge none of those brands permits TimeZero style PC integration with their high performance radar — my hopes for Coastal Explorer and Navico 3G/4G integration remain dashed — and the TZ app WiFi Radar combo is also trailblazing . 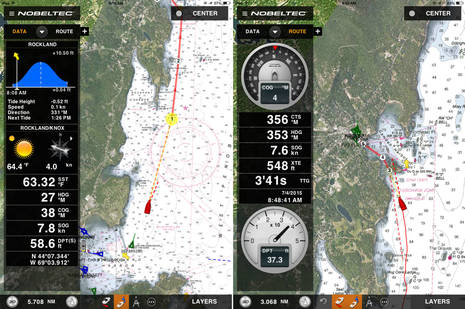 I was quite impressed with the TimeZero app when it came out two years ago, and I like it even better now that version 2 can include AIS, Depth, and Heading. The AIS/NMEA data module costs $10 on top of the chart purchase (iTunes details here), but it works easily with either the Simrad GoFree WiFi1 on Gizmo or the Vesper XB8000 transponder/multiplexer. And since the Vesper is running through my boat router — as discussed in my recent Coastal Marine WiFi review — the iPad is often online to get the bit of weather data seen on the left screen above (or so I can check email quickly). 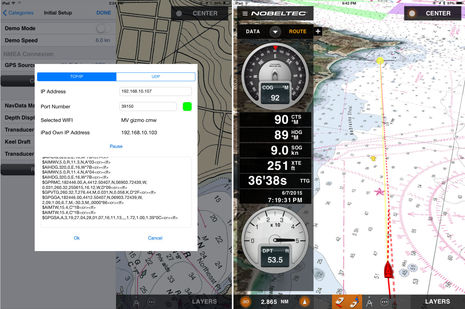 These days there are all sorts of devices that can deliver NMEA data via WiFi to apps like TimeZero (iNavX has trailblazed in this area and keeps a good list of device links). For me it was simply a matter of getting the IP address and port number from the Vesper configuration program or Simrad NSS evo2 system menu, input them on the “Connect to WiFi Router” dialog (above left) and the data rolls whenever TZ is opened and the iPad is on the right hotspot. Note that I can also use the WiFi stream for GPS and that though TZ is looking for NMEA 0183 data, mine all comes from NMEA 2000 with the bridging done by Vesper or Simrad.

I’m showing the TZ app screen at right above in head-up boat-down 3D mode because that’s how I often use it (and the test TZT14) underway, and I continue to think that the whole TimeZero family is leading the way in useful 3D charting, too. Boaters tend to try and dislike 3D at a boatshow or some similarly static spot — even some of the Nobeltec 3D marketing screens look like they were made at a desk — but the plain TZ app at $50 with all U.S raster charts and super hi res PhotoFusion imagery is an easy way to see how this charting engine can work for you (if you have an iPad). 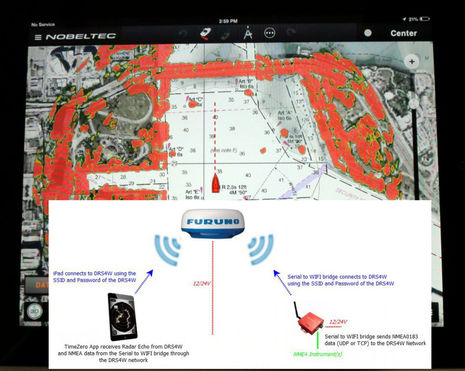 But the bigger deal with Nobeltec TZ v2 is the $50 Furuno WiFi Radar module. As I wrote last December, combining the $1,695 DRS4DW with a good charting program instead of the included standalone Radar App seems to create a real alternative nav system when at least a basic radar is needed. The WiFi setup is more complicated than what I experienced with the AIS module, however, because the radar insists on being the access point. Unlike the Nobeltec PC Radar system, you don’t need to have fast Heading data to use radar overlay (and ARPA), but it is highly recommended and requires a NMEA data-serving WiFi device that can join a WiFi network and be assigned a fixed IP address. The TZ “How it Works” page identifies three: The Vesper XB8000, the ShipModul MiniPlex-2Wi, and the Brookhouse iMux, though there may be more. (I’m impressed that the iMux can now not only join a network, but simultaneously be an access point as well – PDF here.)

Meanwhile, I’ve heard rumblings that the first version of the WiFi Radar is overaggressive with its automatic tuning, knocking out small targets when there are bigger ones nearby, but I also saw A/B test screens of an imminent update that seemed to put that issue to rest. I believe the updated radar will retain its simple, easy-to-use nature, which is quite a contrast with the advanced tweaks available with PC Radar. And I hope we’ll hear soon from someone who’s actually using TZ v2 and a DRS4DW and suspect that may get more likely if the 12.9-inch iPad Pro comes out this fall.

And like the man used to say, there is one more thing. TZ v2 also introduces MyTimeZero. So far it’s just a way to keep track of friends who are also using the TZ app — either on Web or in the app — and it’s still in Beta though I was able to get it working fine with two Nobeltec employees. But MyTimeZero came up again when I asked about the possibility of sharing routes made (easily and elegantly) in the TZ app with TZ MFDs or the PC charting software. Even though it makes sense for Nobeltec and Furuno to aim the iPad and PC radar products at two different boating markets, there are also plenty of us who like the iPad largely as a planning accessory. Iker’s answer is encouraging:

Yes, there is a plan to share routes among all TZ platforms that can access to the Internet (MaxSea, Nobeltec, iPad, TZT, TZT2) through the MyTimeZero account. We are also thinking about “local sharing” (no Internet required) when the iPad and NavNet MFD are on the same network (similar to the current Route and Waypoint synchronization that we have in between MaxSea/Nobeltec and MFD). In our current roadmap (that can always change a little), the Internet sharing (through the MyTimeZero account) is planned first and will roll out on latest MFD first. 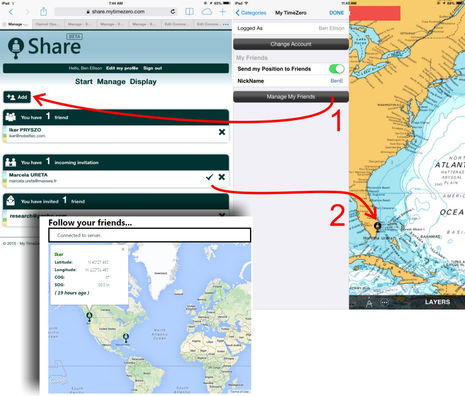