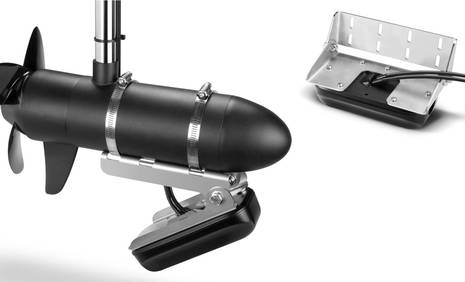 The Garmin Panoptix “All-Seeing” sonar announced this morning sounds fascinating, but be aware that it’s meant for smaller boat fishing, at least at first. The $1,500 rectangular “multi-beam transducer that utilizes a phased-array scanning sonar technology” will come in two styles, with the tilted Panoptix Forward model oriented vertically on a trolling motor or transom mount and the Down Transducer with its horizontal orientation only available for transom installs. Neither one looks easy to transform into a thru-hull fitting but judging from the screenshots a lot of bigger boat owners will be hoping that’s possible… 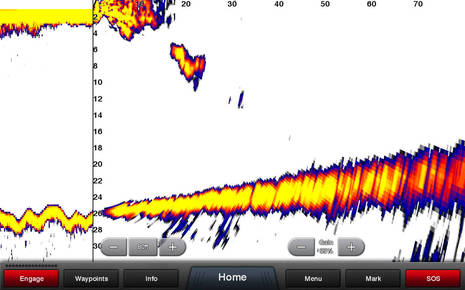 This is the PS31 Panoptix Forward Transducer purportedly imaging 80 feet of slightly upsloping bottom and also a diver about 20 feet ahead of the transducer in what Garmin calls LiveVü mode. It looks similar to Simrad ForwardScan but is covering a wider wedge of bottom and water column and is said to be so fast that you can watch your lure being reeled in (which is what’s happening in the first GIF animation on Garmin’s dedicated Panoptix page). 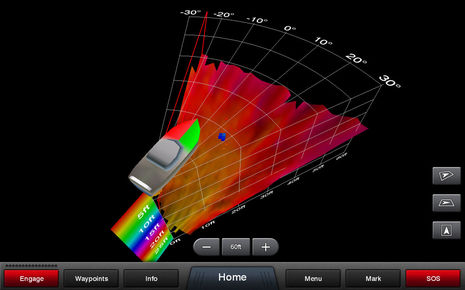 But, whoa, I’ve only seen what Garmin calls RealVü 3D mode on much more expensive sonars like the EchoPilot 3D FLS. This is no doubt a slower mode but the user can control the speed for desired level of detail. Note how this particular RealVü viewing angle shows the 60 degree coverage of the Panoptix Forward Transducer and also how it can paint bottom and fish (or diver?) detail not just forward but from side-to-side within the phased-array beam. 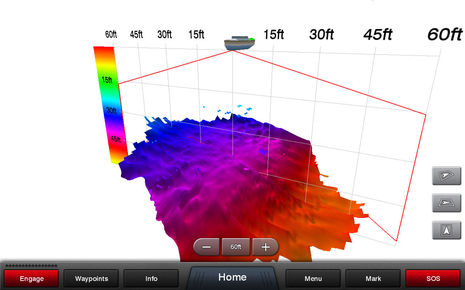 It’s no surprise then that the PS30 Panoptix Down Transducer can create a rectangular RealVü below the boat. It can also assemble these into long swaths called RealVü 3D Historical or do LiveVü Down imaging that supposedly let’s you pinpoint fish and/or bait. And get this: both Panoptix Forward and Down are said to work fine when a boat is stationary and both contain AHRS sensors to compensate for boat motion underway or at rest. 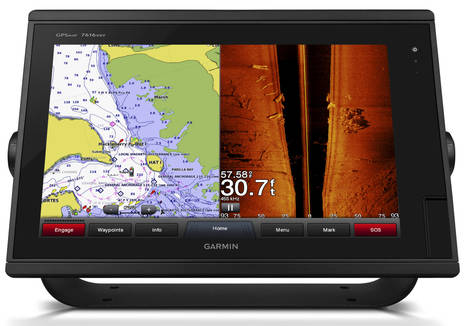 The Panoptix transducers are “expected to be available in the spring of 2015” and will work with a variety of current Garmin MFDs, including the GPSMap 7×00 series that was announced at Lauderdale and is slated to ship very soon. The series already looks to me like a nice ‘value’ version of the 8000 Glass Helm displays and now it will be available in a 16-inch version. In fact, the GPSmap 7616xsv version will retail at $6,000 with built-in processing for not only Panoptix but CHIRP DownVü and SideVü plus dual-channel 1kW CHIRP sonar…quite like the Simrad NSS16 that looked so good in my glass bridge price comparison. Hello!

Finally, the already able planning app BlueChart Mobile will greatly expand its weather resources when version 2.0 comes out this summer. Included will be “weather observations and buoy reports, marine zone forecasts (US/Canada/Europe), land zone forecasts (US/Canada), surface wind forecast grids, sea surface temperatures, surface pressure forecast and and sea state forecast, plus in-app purchase purchase options for radar and infrared cloud imagery, lighting, and StormWatch watches.” And here’s the kicker: with BCM 2.0 owners of Garmin WiFi-enabled MFDs will not only be able to pass routes easily but the updated weather data will stream to the bright readable MFD screen as long as the BCM iPad is online (which is most of the time on Gizmo thanks to my cell boosting system).

Well, actually the real kicker for me is that I’ll be on the water with Garmin Panoptix this afternoon in Miami (and that’s only one of four demo rides today ;-). I’ll report back when possible but don’t hestitate to post questions I might ask now. 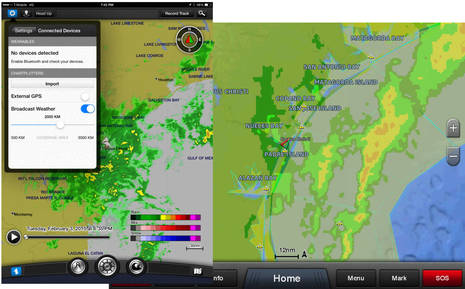 PS 2/20: The Panoptix demonstration in Miami was quite impressive. I think the technology truly is a significant new kind of sonar, even though we’ve already seen so many great developements in recreational sonar during the last few years. 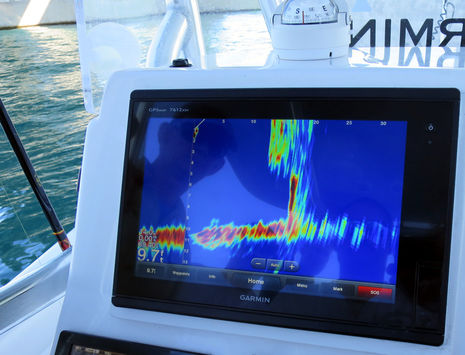 The demo boat was a small center console with the Panoptix Forward Transducer mounted on a trolling motor at the bow, and it didn’t take long to see what a slick rig this could be for lake and coastal fishing. The screen is showing how the concrete bridge abutment steps back, a detail I’d never seen in several side and down imaging demos under the same bridge. Moreover, the image remained the same even when we stopped dead and I missed photographing the fish we saw first lurking in that step back and then meandering towards us. We also tracked lures and saw that Panoptix even has an echo trails option (like radars) that can mark lure and fish movements. The echo trails also showed the heave motion happening on a small boat full of people in a busy waterway, but heave is the only vector not corrected by the transducer’s built-in motion sensor; roll and pitch didn’t distort the imaging at all.

Panoptix RealVü 3D mode was also working well — and can be split screen with LiveVü — but it clearly takes some getting used to and probably some familiarity with its many controls to make the most of. Of course I was really interested in how Panoptix Forward might serve as a grounding avoidance forward looking sonar (FLS) and when we were headed back toward the bridge I forced the range way out. We actually started targeting the shallower water and bridge abutments at nearly the 240 foot screen max seen below and if we’d been able to separately reduce the depth range the strength and certainty of this difficult sonar targeting would compare even more favorably to the Simrad ForwardScan I already find useful. But let’s be clear, Panoptix is not available as a thru hull transducer and is not yet FLS as we commonly perceive FLS. But, man, does it have potential! 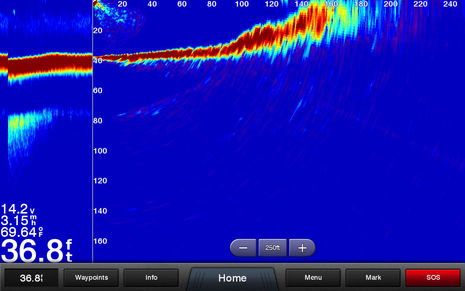