Inmarsat, boxed in by attacks from all sides? 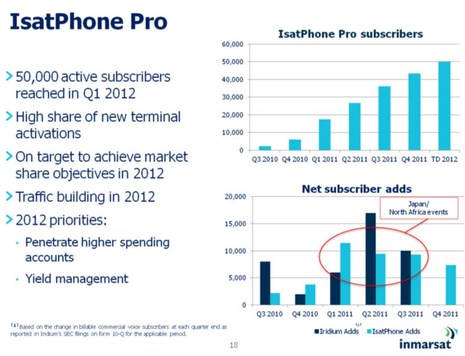 “One thing you need to understand about satellite communications is disaster pricing!” I can’t recall who shared this theory about the importance of price-insensitive satcoms customers, but I was certainly reminded of it last week while taking in Inmarsat’s 2011 FY investor presentation. Not only does that slide above illustrate how “events” like tsunamis and revolutions can significantly accelerate sat phone sales, but you can also hear a CFO refer to “a continuing headwind in Afghanistan” that apparently means a winding down of western involvement and the related heavy use of satellite services. But the main thing I learned from the presentation is why Inmarsat may drastically raise the minimum service costs of FleetBroadband services even though it views the recreational users who might howl about it as an important growth element in its “addressable market”…

I recently reported on some leaked information suggesting that Inmarsat may triple the minimum monthly cost of having FleetBroadband service regardless of how little a cruiser might actually want, or how irregularly they want it. And in the comments to that entry you’ll find me wondering why Inmarsat would make this move just a couple of years after encouraging bluewater sailors like Gram Schweikert to become low volume customers with compact hardware like the FB150 and suitable service plans, even the slow-circumnavigation-friendly ability to pay ahead for a year’s service and then use it at any time during that year. Heck, Inmarsat even helped make Gram’s fabulous FB150 vs Iridium OpenPort testing possible.
What I didn’t understand is that there is an entirely different low-volume FleetBroadband use that Inmarsat wants to curtail. That’s when a big yacht or ship is encouraged to use FBB as a backup to a competitor’s VSAT system that can deliver high volume voice and data at much lower costs but doesn’t have either FBB’s near-global coverage or its resistance to rain interference. Now that Inmarsat has its own Global Xpress VSAT type service in the works as well as the XpressLink combined VSAT/FBB upgrade path available now (via its new subsidiary Ship Equip), it seems especially adamant about limiting the use of FBB as a “free rider back up”. Thus you can hear Inmarsat CEO Rupert Pearce talking pretty tough in the presentation (at about 1:10 in):

…customers want FleetBroadband with VSAT. VSAT doesn’t go on alone.Why? Because VSAT isn’t global, VSAT isn’t resilient, VSAT does crash when in adverse weather conditions. And VSAT above all was not built for maritime, unlike Global Xpress. They’ve appropriated the edge of beam coverage around the world of Ku-band networks. So ship owners have to have FleetBroadband alongside it. Well guess what, it’s just become uneconomic for VSAT operators to do that. So they’re going to have to suck it up or move to XpressLink. And it’s a deliberate strategy by us to bridge ourselves into GX and I’m very, very confident of our market position at the top end of the market.

But then again, a stock analyst later asked Pearce how Inmarsat could get rid of the free riding without messing up Inmarsat’s stated desire to develop “small craft and low-spending terminals” and the CEO mentioned Inmarsat’s ability to “see very clearly what terminal goes where and compartmentalize our pricing”. Maybe that explains the new Stratos Inmarsat pricing I just found this morning. The minimal Standard plan increase to $208/mo for 10 MB is indeed a real jump, but if you download the full price plan PDF, you’ll see a surprisingly inconsistent “Fishing & Leisure Allowance Plan” of $57.80/mo with 5 MB and 30 minutes voice that would probably be quite palatable to some budget-minded yachties, especially if short-term contracts and low-cost activations are also available (which looks possible).
So now I’m confused, and we may have to wait until new plans are published by retail service providers like Intellian, GMPCS, KVH, and the SatPhoneStore to see if such a steep “discount” for smaller boats will hold true. And note that the overage charge for data used beyond one of the “leisure” plans appears headed up regardless — like $20 per MB (!) for the minimum plan — and that’s on top of increases that got folks upset last year. KVH’s miniVSAT TracPhone V3 with a minimum plan of $50/mo that includes 50 MB and overage at $.99/MB is starting to look quite good for folks wanting to do more than carefully sip data, once you get by the higher hardware cost.

But I don’t think I’m confused about how complex and competitive the satellite communications business has become. The Inmarsat that once dominated the marine side of the business, except for portable phones, seems to be under attack from all sides. Besides the VSAT competitors (who will now have to struggle with new FBB backup costs), KVH is also coming at Inmarsat high-end customers with a new dual-band TracPhone V11 system, and Inmarsat could barely contain its disdain for that and also for KVH’s claimed major ship deal in that webcast conference call. The corporate relationship seems officially strained!
Meanwhile, despite my predictions that Iridium would lower hardware and service rates to meet the IsatPhone Pro challenge, it instead maintained rates but began introducing improved phones and a new model of Openport, not to mention all the lower-end SBD modem partnerships like Cerberus and inReach. And according to at least one analyst Inmarsat is now going to raise their phone rates. I’m sympathetic to any company trying to maintain enormously tricky satellite systems with relatively few customers (check the numbers on these slides), but, darn, it’s hard to sort out what’s good for those customers given “disaster pricing” and other considerations that seem to fall well outside old-fashioned “supply and demand” precepts. 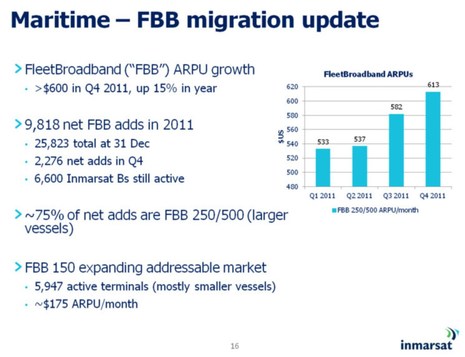