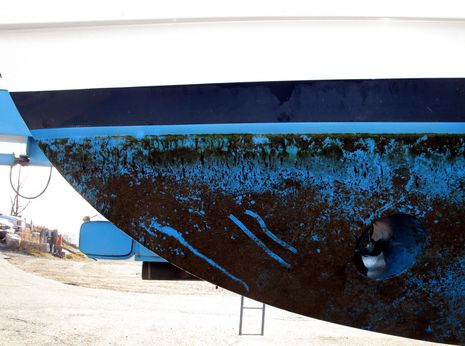 Antifouling bottom paint is a tricky subject, especially now that we’re rightfully paying more attention to the health of the waters it works in and the health of the people who apply it. So I was happy to experiment with copper-free Interlux Pacifica Plus this season, and the results were better than this photo looks. In fact, I may well use it again next year, but I would like to understand more about what chemistry actually constitutes a safe and effective bottom paint…

First I should explain that Gizmo’s home port of Camden Harbor is also home to a particularly aggressive brown slime. It may be because the Megunticook River foams into the head of the harbor as a waterfall, or that the output of the town’s sewage treatment plant is piped into the same area, or a combination of the two. I gather that many harbors are distinct micro climates in terms of boat-bottom-loving flora and fauna, and also that fouling conditions can change yearly due to variable biology and water temperatures (and of course they change from region to region, and further vary with how a boat is used). So meaningful comparisons of bottom paint, even using the same boat in the same place, are tough!
Nonetheless, I’d say that Pacifica Plus did at least as good a job as the Interlux Micron CSC I used in 2010, though the pictures below — both taken during mid-December haulouts a year apart — need explanation… 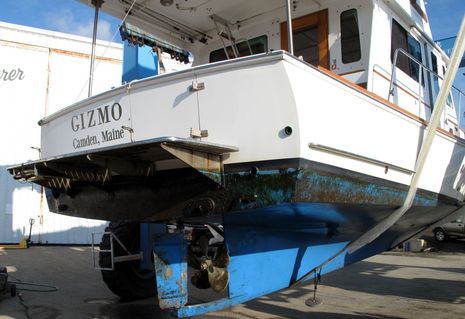 For one thing, I never touched the blue Pacifica Plus paint job (except for brushing around the underwater lights) while I got so upset with how the slime looked on the green Micron CSC that I put on a wet suit and scrubbed the whole waterline in August, 2010. So what you see above is seven months growth while some of what you see below only represents about four months. It’s also hard to see how much scuzzier the lower, shaded, and definitely un-brushed portions of the CSC bottom are. Note too how the slime on the Pacifica Plus was coming off with just a light finger touch in the opening photo; I’m quite sure that it would have been easier to brush clean in the water than the CSC was, and thus could have looked better by season end. And, incidentally, it costs less than CSC.
So I’m pretty happy with Pacifica Plus, but am I really doing the environment a favor by going copper-free?  This Practical Sailor piece suggests that’s so, and also that California may soon ban copper-based antifouling paint altogether. And certainly ePaint makes favorable claims for its biocide chemistry versus traditional copper. But I notice that Interlux makes no particular “green” claims for Pacifica Plus, only that it’s “designed for those looking for copper-free antifouling.” And the yard manager at Wayfarer told me that while this paint is safer for his employees, he’s not convinced that it’s better for the harbor. He also said that the DEP hasn’t approved any bottom paint yet. Anyone know what’s going on here? 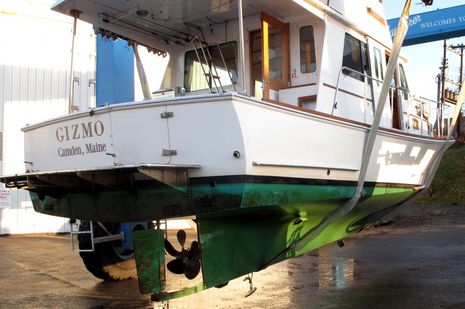 One guy who might have some valuable input is Interlux Technical Sales Rep Tim Taylor, who set up this bottom paint comparison. He also advised me about painting that bit of polyethylene spray rail that passes through the boot stripe and used to look awful when the slime got to it. I was especially dubious because that rail gets flexed substantially by the travel lift straps, but his advice — simply scuff the rail and spray on an AwlGrip topcoat — worked very well.

In fact, during this last haulout strap strain actually broke the (cold) spray rail, but the AwlGrip didn’t chip or peel a bit!  I’m hoping that a glue repair is possible, and also thinking that we should try moving the “strap here” labels on Gizmo further aft. Is there ever an end to a boat owner’s problem solving challenges? 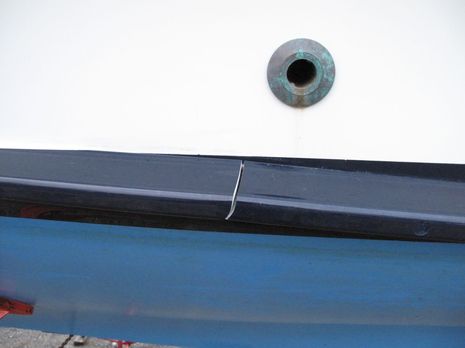