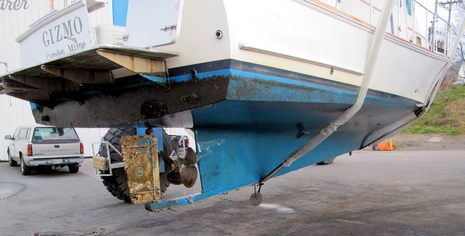 That’s a darn impressive photo, I think. When Gizmo was hauled on November 22, she hadn’t been out of the water since May 2012, and most of that copper-free Interlux Pacifica Plus bottom paint had already endured a seven-month test in 2011, as I wrote about then. So, after more than three seasons, most of the running surfaces are still slick (and probably still self-cleaning when the boat occasionally goes fast).  I did use the remains of the original two gallons to repaint the belly band before the 2012 launch; Gizmo lay in cleansing South Carolina fresh water from November that year through March of this year, and I scrubbed the belly band from the tender last July. But notice how almost no barnacles or mussels — the critters that can really slow a boat down — adhered to the Pacifica Plus…

Gizmo’s port side, which gets more sun at her Camden home float, did have more slimy weed on it, but I don’t think it hurts the boat’s performance much. I don’t like how the slime looks, but I could have scrubbed it off easily as the ablative paint was still very soft. That’s a finger swipe near the aft waterline in the photo below, and you can see how the pressure hose is sending blue paint into Wayfarer Marine’s catch basin (it’s a certified “Clean Marina”). Of course, if I’d done more scrubbing, I might have stripped off all the active paint — a rationale for sloth? — but overall it seems like I got a whole lot of value from two gallons of Pacifica Plus that cost about $400. It also seemed good not to ablate cuprous oxide into the water (and boatyard workers), though I realize that the jury is still out on the environmental and health effects of the paint’s Biolux and Econea biocides. 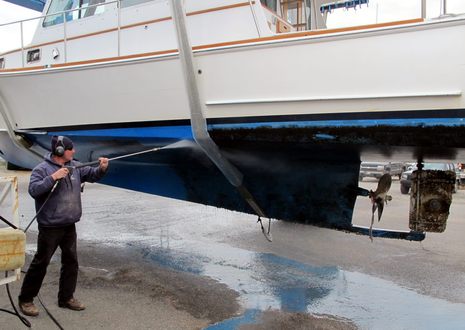 I would like better protection against our aggressive local slime, though, and may get to test Pettit Hydrocoat Eco next. It’s copper-free and water-based, uses the same apparently effective Econea to discourage critter settlement, but contains what may be a different zinc-based, slime-blocking biocide (the product and safety sheets for these paints are informative but also confusing to someone who is not a chemist). I’m pretty sure that Hydrocoat Eco — which I learned about when we gave it an IBEX Innovation Award — is the same as the West Marine CFA Eco that was honored as a… um… West Marine Green Product of 2013.
I’d be happy to see if ECO is as effective as claimed (the safe, green aspects are hard to quantify) and the Gizmo plan is to stay in the water from at least May 2014 until late 2015. But, let’s all note that an anti-fouling paint works differently in different environmental conditions and on different boats. For instance, I saw a Practical Sailor comparison in which Pacifica Plus didn’t do well, but then it occurred to me that their fixed panel testing misses the ability of some paints to easily slough off growth while underway at a speed. Or am I missing something? 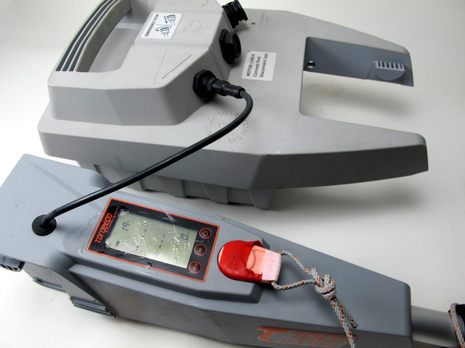 The long test of the Torqeedo Travel 1003 electric outboard also started in May 2011 and has gone equally as well in my view, though the story is more complicated. I declared my love for the Torqeedo soon after I got it, but if you read through the 80 comments to that thread, you’ll learn that some owners were frustrated by various issues. While my test motor ran fine, fairly early on I realized that if I cranked it to top speed, I’d hear a nasty lower unit whine and sometimes experience a protective shut-down with the E45 (“battery overcurrent”) error message showing on the display. However, it always restarted very easily — turn off, then turn on — and I rarely use the motor at max speed anyway.
But this spring — when I was using the 1003 on the little tender down south — the “noise” seemed to be getting worse and I’d also managed to drop the battery onto the tiller handle, which tore the clear plastic over the LCD display (see photo above). So after getting home, I sent it in for servicing, which is when I learned that early production units (like mine) had a problem with badly fastened magnets in the “motor bell.” The loose magnets were causing the noise and also straining the motor enough to cause the protective E45 shut down. Torqeedo had fixed the problem in design and assembly a long time ago, and Torqeedo USA fixes it for free even when the motor is past the two year warranty – so all good.
Torqeedo also replaced the display cover and sent the repaired components back to me where the 1003 ran like a top, even at high speed, for about one day! That’s when I experienced true Torqeedo frustration. Sometimes the motor ran fine, but other times it would give me E45 or E21 (“tiller calibration defective”) errors and refuse to start no matter what I did. I figured out what was going on when I turned the tiller over and saw water collecting inside the display cover. I couldn’t really blame Torqeedo as it was me who used the broken tiller for a month, some of it quite wet, and obviously the water that got itself inside the sealed display box didn’t cause an issue until after the darn tiller came back to Maine. Plus once the new tiller arrived, the motor ran flawlessly until I put the big tender away last month.
Now here’s the really good news… During all this I learned that Torqeedo parts and estimated labor are quite reasonable. A whole new tiller is $199 and the Motor Bell would have cost $86 and an hour labor (rate depends on which Torqeedo service location you use). The prop is $80 and the skeg is $30. I’ve been advised to have the main seal checked because I’ve left the motor in the water for three seasons (see photo below), but that’s estimated at 1 hour labor plus a new $22 gearbox cover. And even if I manage to ruin the submerged electric motor, a replacement “pylon” (see parts book) only cost $749, which seems about right given the whole motor’s $2,000 retail price. These numbers look especially good to a guy who’s used to engine parts that seem vastly inflated (I’m looking at you, Volvo Penta).
Besides the relatively high price, possible Torqeedo owners may be put off by the idea of an unusual outboard that uses parts imported from Germany, but now I don’t think that’s a real worry. In fact, I’m still in Torqeedo love and hopefully not nearly done testing this Travel 1003. 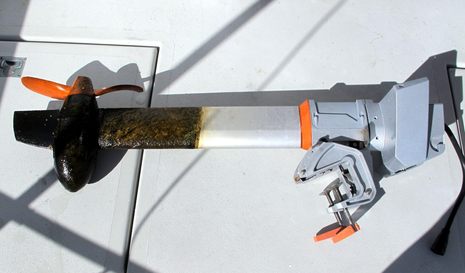