“Lessons of the BOUNTY” — Andy nails it 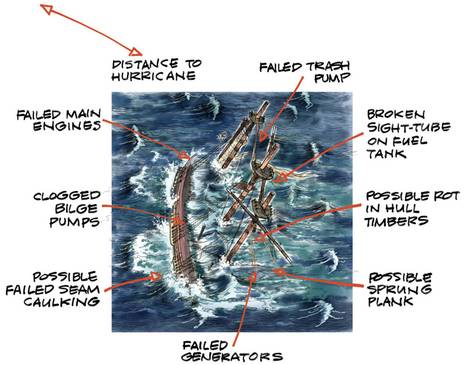 I’ll probably always associate Hurricane Sandy and the sinking of the HMS Bounty with last fall’s cruise to the Carolinas and a Fort Lauderdale show that got a little scary just because Sandy’s eye passed by about 160 miles to the east. Soon after flying from Lauderdale to Gizmo’s super safe location in Myrtle Beach (lucky!), I was adding Bounty comments to an entry about how I’d first spotted the storm on a Furuno TZT. What I didn’t mention then was that I’m one of a cohort that had more reason than most to get cold chills over the sinking of a large traditional sailing vessel, a loss that could have been so much worse if it weren’t for an extraordinary USCG rescue operation. But it’s relevant now because an old square rig shipmate has written a very fine analysis of the disaster and what we can learn from it…

I wrote last Christmas about my time as relief captain of the barkentine Regina Maris. Well, another reason that I pulled that off, despite my vast inexperience, was the assistance of several very good mates, perhaps the best of whom was a young Maine Maritime Academy graduate with the full name G. Anderson Chase. Andy already had substantial experience in large sailing vessels, and he also had the maturity to be a very supportive mate (instead of playing the impatient second-guesser role he had every right to assume given his youth and our topsy-turvy experience levels).
For that I’m forever grateful, and I’ve followed Andy (mostly from afar) as he first pursued a bluewater career — which included being the subject of John McPhee’s excellent Looking for a Ship

— and then became a professor at the Academy, where I believe he was quite instrumental in expanding the “transportation” program to include smaller vessels and even auxilary sail. So when Andy’s Bounty article came out in WoodenBoat magazine last summer, I dug into it with very high expectations. I was not disappointed; in fact, I think Andy nailed it, and I’m pleased to report that he, illustrator Jan Adkins (also creator of the marvelous Craft of Sail

), and WB have made the whole “Lessons of the BOUNTY” article freely available to all. 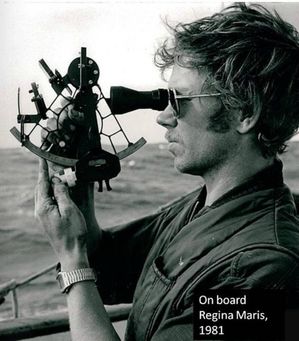 When you read the piece, you’ll find that Andy makes humble use of his Regina experience to poke at the widely held notion that experience itself is the source of good judgement. “Experience in a vacuum doesn’t make us smarter. Experience has to be processed. It has to be considered with full disclosure.” I can’t say I’d ever thought that through, but it makes total sense, as do the principles of Bridge Resource Management, Risk Management and Margins of Error, which Andy explains carefully and in relation to what was going on aboard Bounty before and during her fateful voyage.
Andy also addresses the old rule of thumb that was purportedly favored by the Bounty’s captain, noting that while, “It used to be an accepted standard that a ship was safer at sea than in port in the event of a severe storm”…it also “used to be that the ship was more important to the owners than its crew was.” What really gets me, though, is when he imagines the collaborative vessel readiness conversation that could have taken place amongst all the Bounty’s department heads before she left New London. It seems like the real pros know that the age of the all-knowing captain is over, and that’s a good thing.

I’ve noticed that when we discuss boating accidents on Panbo, like last summer’s Hylas dismasting, the conversation eventually turns from blaming equipment or techniques of doing things (old or new) to the subtler subjects of crew communications, situational awareness, cascading errors and the like. I think there’s been a lot of progress in understanding how things actually go wrong, probably originating in critically difficult fields like combat and aviation (and USCG rescue ops). This progress may be overshadowed in our eyes by the amazing march of technology, but, man, I’m glad to know that Andy and his similarly qualified colleagues are teaching future mariners at this level. You, too, may want to follow up his Bounty article with Dan Parrott’s Bridge Resource Management for Small Ships 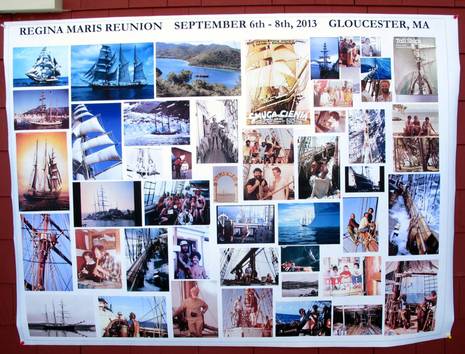 I don’t want to leave the impression that going to sea on an old traditional sailing vessel, even one that leaks over a 1,000 gallons a day, is completely foolhardy. Hell no! It was a complete blast to join Andy Chase and nearly 60 other former deck officers, cooks, scientists, students, etc. at the Regina Maris Reunion in Gloucester because the vessel had been such an intense experience in all our lives. It was especially neat to meet crew from other eras in the boat’s long career (roughly outlined on Wikipedia, but much more richly documented on Facebook and Flickr). Apparently, the old girl had been seriously leaky for a long time before I got on board, but neither does anyone forget the sheer joy (and/or terror) that can be found high aloft on a yardarm.
Oddly, though, I’ve just found the best description yet of our unforgettable Silver Bank whale watching cruises in a great little book I didn’t even know that Andy wrote. Fortunately, Sea Stories by Andy Chase can be read in its entirety online. Aside from describing how close we got to the majestic humpbacks — I totally concur with “one of the very highest high points of my life” —  Andy also captures the low point of our last Regina passage together. I found a another reference to it in the logs that many of us perused deeply in Gloucester. (What did I mean by the “Crud” in Puerto Plata and did I write my log entry as, “The ‘Crud’ strikes twice this day,” because I’d been reading too many Hornblower novels?)
At any rate, check out GAC’s log entry about the broken chainplates his watch discovered when we were at about 28N x 70W with dicey shore communications and nothing like the SAR systems we have today. And I believe that one or two more shrouds gave way before we nursed Regina into Bermuda where the students and scientists got off for a maintenance period. I also recall that besides the very hard work of removing and replacing alternate chainplates, the crew had a pretty wild time largely because we’d salvaged a wrecked sailboat in the Bahamas and we sold the booty to local DIY boatbuilders to fund dock parties. But both Andy and I rotated off the vessel during that beautiful 1981 April in Bermuda and neither of us sailed on her again. 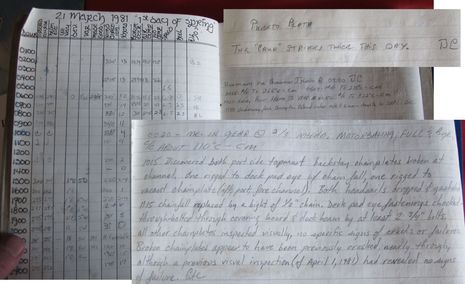