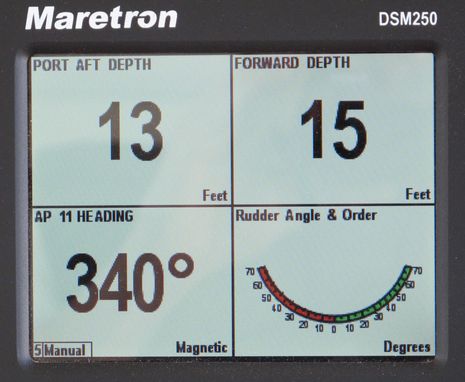 There’s a lot to say about this screen and how the values got there, or didn’t, but what I like the most is how Maretron’s DSM250 is displaying the outputs of two NMEA 2000 depth transducers at once, and that I was even able to name their data windows in an informative way.  I think the screen will be useful in some tight gunkholing situations, and would be even more so on a larger vessel or a multihull.  Unfortunately this level of N2K data management is not yet available elsewhere, unless I’ve missed something…

Most of N2K displays I’m testing let a user choose the source of a particular data type if there is more than one on the backbone, but they don’t let you show two of the same type, except for items that are commonly multiple like engines and tanks.  Some Lowrance MFDs are an exception, but I’m not sure that feature migrated to the HDS series (I’ll check), and I recall that it did not apply to depth for some reason.  So you can often get double depth read-outs by setting different displays to different sources, but maybe only Maretron supports the screen above.  The trick was to change the “Instance” of one transducer from the default “0” so I could then select different instances of Depth when setting up the screen.  Not every manufacturer gives you the ability to change Instance, though Maretron is great about it, and you almost invariably need a same manufacturer display or software to make the change.  Instances is one of those areas of N2K that most users will never need to know about, and I find confusing, but it seems to have powerful possibilities.
“Labels” is another one of those areas.  Frankly I don’t even know if they are a mostly-unused N2K option, or only a Maretron feature.  But they’re definitely cool when they work.  As you can see on this N2KAnalyzer screen, many Maretron sensors accept Labels.  You can type them right into Analyzer for storage in the sensor and then when you’re building a screen on the DSM250 or in N2KView you can simply use the custom label as a data description.  Unfortunately, the oldish Maretron DST100 I’m using doesn’t support this feature and I had to resort to the DSM250’s custom name feature (below), which is nice to have but painful to use.  Do not tap away at those four keys to painstakingly write a long description and then just Back out without going to “Save & Exit”!  Maretron also doesn’t seem to recognize the DST2000 I mounted near Gizmo’s bow as something it can configure, which seems odd as Airmar built the DST100 as well.  (That transducer, incidentally, works better than many predicted, holding 300 feet of bottom at up to 14 knots in testing so far.)  A Garmin MFD can set a keel offset on the DST2000 (also called the DST800, I think), but I found that both it and Maretron got confused about such configurations if both transducers were online at the same time.  So it goes.
Now about the Simrad AP 11 heading and rudder data seen and not seen in the top screen.  At first I thought I could use a Maretron RAA100 adapter to get the latter, but it turns out that Simrad used frequency instead of resistance for its pre-N2K rudder sensor, and the RAA100 can’t translate.  So instead I wired a Simrad AT10 to the AP11’s NMEA 0183 port.  The latter is supposed to output rudder data and the former is supposed to translate it, but, as you can see, the DSM250 isn’t showing it.  But it is now getting heading info from the AP.  So it goes. 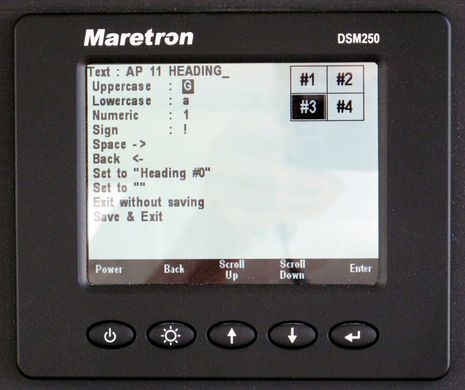