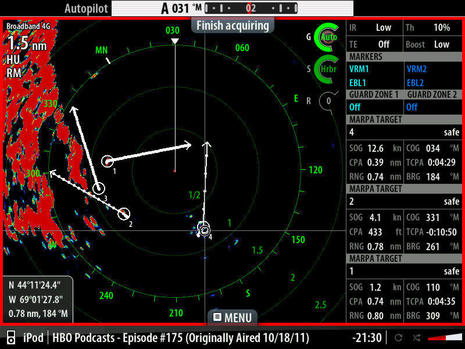 Does Navico 4G radar (branded as Simrad, Lowrance, or B&G) have a “ridiculously broken MARPA” function? I’ve heard similar words from three different 4G owners in the last few weeks, and that’s enough to interrupt the boat show and summer testing entries I’m way behind on. I don’t have a definitive answer, however, plus I’m skeptical that Navico’s MARPA is especially bad because in my experience all small radar Mini Automatic Radar Plotting Aids are somewhat flaky for what seem like fairly obvious reasons… 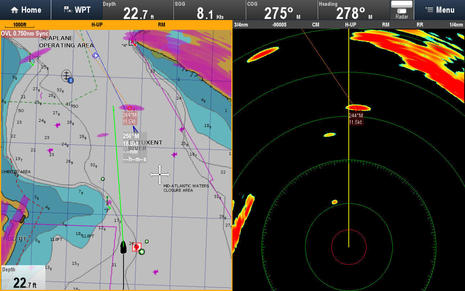 Let’s start with an example I screen captured on Chesapeake Bay last May. The AIS and MARPA targets seen overlaid on the left side mark the same boat blowing by Gizmo in broad daylight. The reason the AIS target is lagging behind the radar target is a known issue with Class B transponders; they only transmit dynamic data every 30 seconds at best, while the radar blip is refreshing every 2.5 to 1.2 seconds (depending on the array’s possible 24 to 48 revolutions per minute). Very soon after this shot, the AIS target jumped to where the radar blip was as the boat steadily planed up the bay. However, the AIS reporting of 256° heading and 18.9kn speed are quite accurate, as they’re coming directly from a GPS on the target boat. Meanwhile, the 12° degree and 7.4 knot errors in the MARPA calculation are actually pretty darn good in my experience. 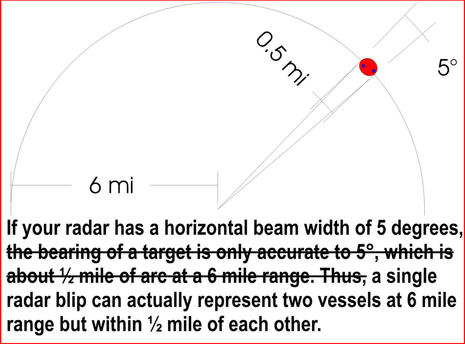 READERS BEWARE (added 12/6/15): It would be hard to untangle the text below, but it is to some extent based on a significantly wrong assumption. Radar bearing accuracy is independent of horizontal resolution, and isn’t particularly related to beam width. So the phenomenon of seeing two targets as one is true, but it does not have a direct effect on MARPA calculations. I learned this in the Panbo comments below, slowly and largely thanks to Peter Hayden’s tenacity. However, you’ll also see that I’m not the only one who’s often seen uncertain MARPA calculations from small radars. Why that is — and how much it varies from brand to brand (or in some cases, boat to boat) — is still in discussion. Mea culpa, Ben

MARPA calculations are really hard! The MFD involved has to compare the range and bearing of successive target returns to calculate its relative speed and heading, and then subtract out your own boat’s motion. But radars, especially small ones, are quite imprecise at range and bearing. That’s why pulse power and horizontal beam width are primary specifications always listed for radar units and always discussed in radar courses. The 5 degree beam width, typical of 18-20 inch radomes like the Simrad 4G and the Raymarine RD418HD behind the MARPA example screens above, means that the raw microwave pulses cannot discriminate detail within a 5° swath, and that swath really is a half mile wide at a 6 mile range. In other words, the individual target bearings used in MARPA calculations are quite crude. 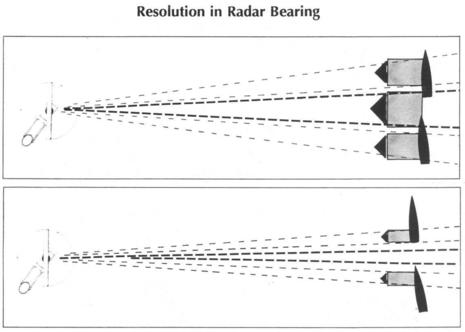 Fifteen years ago I used the Ocean Navigator School of Seamanship illustration above to teach how large radar beam widths can even make two targets look like one, and I probably first came across the concept in Chapman’s or something similar in the early 70’s. The uncertainty of radar vision is in my boating bones, and hence I’ve never been surprised to see MARPA true heading and speed calculations jump all over the place, at least until the MFD has had a good long time to compare successive bearing and range guesstimates. By the way, the 5° beam width applied to the Raymarine 3/4 mile MARPA target above — online calculator here — indicates that the radar was trying get precise bearings on the fast 40-foot boat with a beam 400 feet wide. No wonder it got the speed so wrong, and no wonder that I’ve rarely seen small radar MARPA calculate the speed of a fixed navigation aid at 0 knots (though I’ve tried that trick with many radomes). 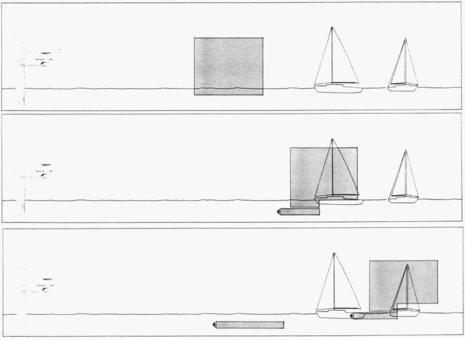 Radar range resolution is also an issue. While the old illustration above shows how a relatively short pulse can discriminate between two targets with a similar bearing, you can imagine how the companion diagram has a long pulse returning the targets as one solid blip. But small radars with relatively low 2-4 kW power need to use long pulses to put enough energy on target to get any return at all. The resulting range uncertainty is much harder to quantify than beam width because different radars use different pulse lengths at different ranges, but, sorry, range is not truly precise even if MARPA data windows make it seem so.

All this is why I wonder about the recent email that says in part, “I’ve searched your site for any reference to Simrad’s MARPA problem but haven’t found anything…The problem is MARPA is unstable, it often fails to display any data, or the data it does display is erroneous and doesn’t match AIS data. This isn’t a new problem, I’ve logged a call with their tech support but no fix has been made to my knowledge…Apparently Navico is too big to care.” Could it be that this 4G owner has unrealistic expectations of what small radar MARPA can do? Or maybe “the Simrad MARPA problem” really is a particular thing? Hopefully this entry will draw comments from all sorts of MARPA users, especially ones with 4G experience, and maybe from Simrad itself. (Afterall, compared to Garmin, Furuno and Raymarine/Flir, Navico is actually the smallest of the major electronics companies, I think, and surely the one with the most eggs in recreational marine.) 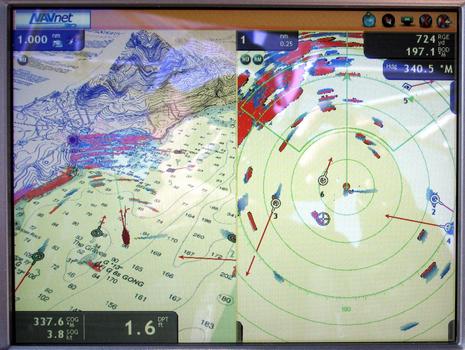 But how many boaters actually use the MARPA they may have? I’m obviously not a big fan myself, and when I searched Panbo for past references it turned out that I used the only MARPA titled entry mostly to discuss attractive alternatives like the True Echo Trail feature seen above emanating from a Furuno DRS2D radome. That little radar can even do full-on ARPA, the automatic radar tracking that’s usually only available on ships, but note that Furuno has removed many such advanced features from the similar DRS4W WiFi radome and even the new no-separate-power-supply DRS4DL. While the prices for these radars is much lower and the user interface much simpler, a Furuno rep at FLIBS also told me that not many recreational boaters use MARPA, ARPA, True Trails, True Motion, high RPM, and similar features, anyway. You could say they’re lazy, but I think that most modern radomes offer a lot of useful information without the extra features, especially combined with AIS and chart overlay. When a yachtsman says that MARPA is critical to safe navigation, I tend to wonder if they’ve been overly influenced by the commercial world where radar beam widths are much narrower and pulses much shorter. 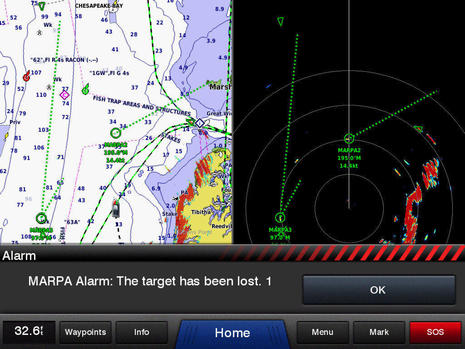 In light of this 4G controversy, I do wish I’d tested MARPA more, but I did find some examples when I flipped through the hundreds of screen shots I’ve collected in recent years. Above, for instance, is Garmin MARPA working with a GMR 24 xHD radome that I’d just installed in Baltimore last fall. It’s the best performing Garmin radome I’ve tried so far, though often not quite up to what I see on the smaller but similarly priced radomes currently on Gizmo. The Marpa calculations were fairly close to what the targets were actually doing — the 24 does have a 3.7° beam width — but I took the shot to remind myself that Garmin also has a lost MARPA target alarm you can’t turn off even though almost all such targets go off screen eventually. Raymarine has already heard it directly about their annoying audible alarm, but please, manufacturers, let us users have some say in this. I’d like to reduce MARPA alarms to a simple blinking icon like lost AIS targets, and I think I’d be just as safe. 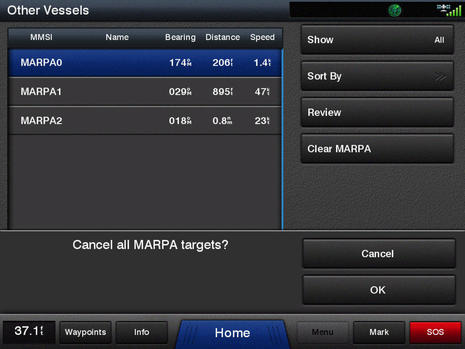 I took this shot to show that Garmin does make it fairly easy to cancel all MARPA targets at once and avoid the alarms, but also to remember that target doing 47 knots while only 800 feet away. If it were close to true I probably wouldn’t have been messing with screen captures. Again, I don’t recall ever seeing small radar MARPA calculations that didn’t get screwy at least occasionally. And the developers can’t just smooth out the results so they look more stable than the underlying range/bearing data. A real change in target heading and/or speed is what you’re hoping MARPA can tell you quickly. Besides, erratic MARPA are meaningful; the MFD is saying something like “I’m trying to figure this out, boss, but it’s hard!” 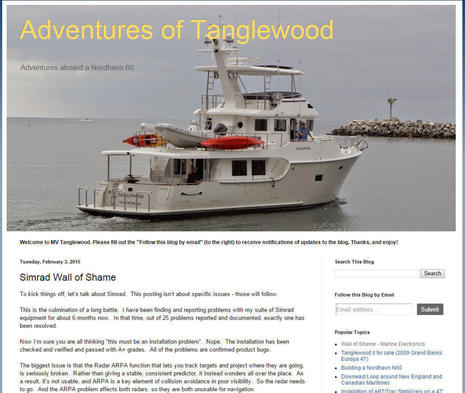 Finally, there’s another aspect of the 4G MARPA problem that I feel obliged to bring up. All three 4G owners who complained about it — one is on the Forum — referenced the Adventures of Tanglewood blog where Nordhavn owner Peter Hayden has put a lot of time and energy into documenting his bad experience with Simrad gear, MARPA in particular. He eventually tore it all off! I think that Peter may have gotten a little carried away. “The very unhappy customer” is a phenomonon fairly common in marine electronics — perhaps the dark side of how much fun it is for certain smart, accomplished men to dive deep into their boat gear — and I’ve been there myself. It’s really hard sometimes to see the forest for that one FUBAR tree.

At any rate, I think I’ve read most of Peter’s Wall of Shame and while our overall (Simrad) systems were quite different — they all are — he had specific issues that don’t jibe at all with my specific experience. I also tried to straighten out some misinformation in his NMEA rant and you can see for yourself in the comments that it was hard going, with no correction to the entry made. Which is not to say that there isn’t a lot of valuable experience laid out on the Tanglewood blog — agreed, for instance, that N2K certification is NOT a compatibility guarantee. But I need more evidence before thinking of Navico 4G MARPA as “ridiculously broken” and I’m hoping readers will weigh in.

I’ll also get another chance to check out 4G and Halo MARPA when Navico again hosts demos in the Florida Keys. Halo MARPA was first shown during the Baltimore NMEA demos, though only briefly. Looking at my photo below, I like the bread crumb trail, which should be solid information about the target’s past course and pace, and I don’t miss the target vector (an option?). Let’s talk about MARPA and other ways you use radar to avoid surprises. 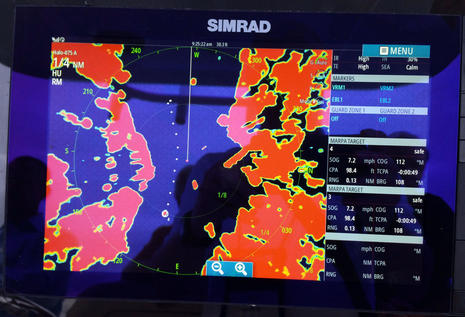