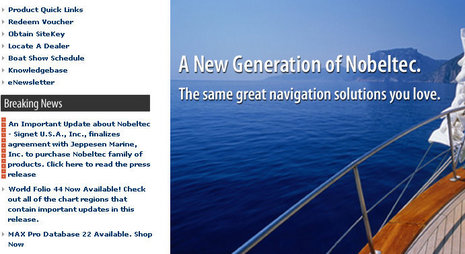 Heads are still being scratched. Why would SigNet S.A. — the French holding company that owns MaxSea and MapMedia, and is itself 48% owned by Furuno — buy Jeppesen’s Nobeltec division?  And what does this mean for VNS and Admiral users, and marine electronics?  I got to talk with all the companies involved yesterday, and am optimistic that Nobeltec customers will benefit from this deal, at least in the short term, and agree with many that the overall possibilities are, um, “interesting”…

At least for now the only real change Nobeltec users may experience sounds like a positive.  The customer service department will move from Denver back to Portland, Oregon, where the Nobeltec management and developer team will remain headquartered.  Product manager Bill Washburn says that getting the staff back together again should mean improved service.  He also seemed happy about going to work for Brice Pryszo, who founded MaxSea in 1985 and is still excited about PC navigation today.  It seemed more and more obvious over the last year or so that Jeppessen was much more interested in providing data than developing software, let alone marketing hardware like radars.  I dare guess it was hard to be a tiny division of a huge corporation that had apparently lost interest.
But Jeppesen definitely wants to keep updating and selling C-Map MAX Pro charts, and even Passport Charts (now based on C-Map data) to Nobletec users.  And thus it may have been a brilliant move to put Nobeltec in the hands of a company that knows a great deal about PC charting.  Meanwhile MaxSea gets an instant relationship with a large US user base it’s always had a hard time cracking.  But, while nobody involved will committ to more than the keep-on-keeping-on plans above, I suspect that there’s more to the story.
When I asked Ken Cirillo, longtime C-Map USA manager, if this transition might lead to C-Map core data getting used by MapMedia to make NavNet 3D and MaxSea Time Zero charts, he grinned big time.  And I got similar results when I asked Furuno product manager Eric Kunz if this might mean that Nobletec users will get Furuno hardware options.  At minimum I imagine Nobeltec users might eventually be offered a smooth upgrade path to MaxSea.  Best line of the day goes to FurunoUSA’s marketing manager Dean Kurutz.  When I noted how propitious it seems that I am just about to install and compare Nobeltec Admiral and the soon releasing MaxSea Time Zero (w/ and w/o Furuno hardware), and their respective cartography, he cackled, “We win!”