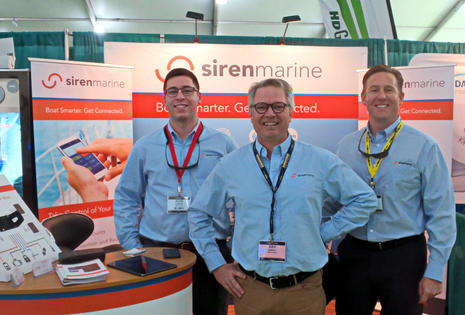 There was so much going on with remote boat monitoring, tracking, and control at the Miami International Boat Show that I started wondering if 2017 would be the year this technology takes off. I’ve long thought that many boat owners would really appreciate the peace of mind offered by good monitoring if only they experienced it. And while this hardware/service category is confusing because there are so many things that can be done in so many ways, wow, there sure are a lot of companies that hope to help you experience it… 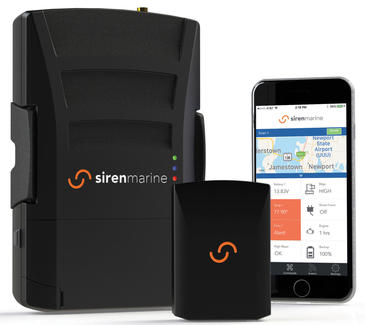 When I detailed Siren Marine’s new MTC system last October, I thought it would soon materialize. But boat monitoring at this ambitious level must be easy to install and use while being wickedly complicated under the hood, and that takes time and money to develop. So, perhaps, CEO Dan Harper and his crew are grinning even more than they were at the Miami show now that Siren funding is secured and initial MTC units are expected to ship this month. Taking the MTC features tour does reveal that some advanced capabilities — like NMEA 2000 support, video capture, wireless sensors, and satellite backup — are coming later, but a boatload of effort and monitoring experience has gone into the MTC “basics” and I look forward to testing the system.

Speaking of testing and difficult development, the ambitious SkyMate Mazu/mSeries sat comms and monitoring system I learned about in Miami apparently hasn’t shipped yet either, as this system, too, is planned to make Gizmo perhaps the most monitored little cruising vessel on the planet. 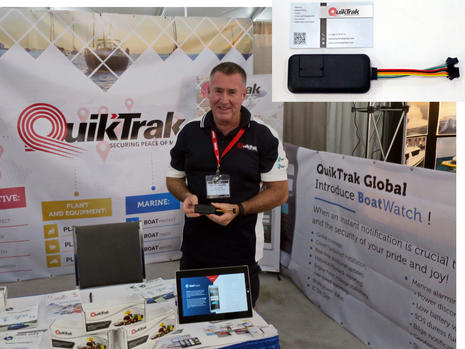 QuikTrak Global was a new company to the Miami show and to me, and their BoatWatch site seems light on details, but their technology looks quite interesting. If you download the BoatWatch catalog, for instance, you’ll see that the Australian mother company M2M Global Technology not only serves many tracking and monitoring markets, it claims a proprietary “IMNS” SIM technology that can smartly switch between multiple GSM and WCDMA cell networks.

Unless a remote boat monitoring system uses satellite data, or has a satellite backup, cellular coverage is critical and none is truly “global” — even in reasonably civilized places like my Camden, Maine, home port. The core hardware for the BoatProtect, BoatTrack, and BoatWatch service levels is also tiny, and I was told that both hardware and subscription pricing would be suitable for small boats, but those are the sort of details I hope we’ll see soon on the BoatWatch site. 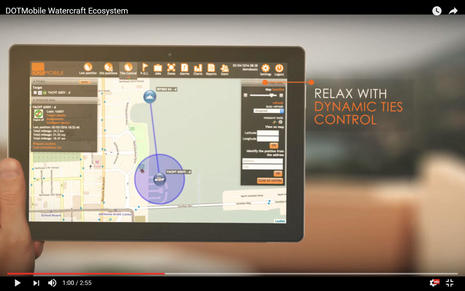 The DotMobile Watercraft Ecosystem was another first time Miami booth visit and is again a division of a larger IoT enterprise, but their emphasis seems to be on larger yachts, even monitoring tenders and crew. Check the PDF download for the best detail of features and hardware specifications. Like QuikTrak’s, it seems possible that DotMobile’s technology will be more fully realized under a more familiar marine brand name. In fact, it seemed like most every monitoring company I checked out in Miami had already been visited by a research team from Garmin! 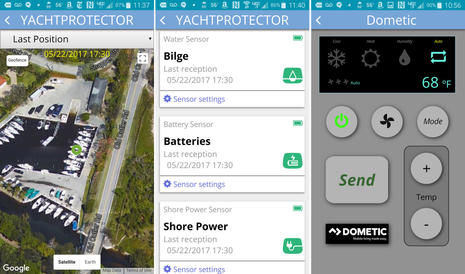 Meanwhile, various versions of Yacht Protector are detailed and ready to ship, though I have to add that my first testing experience last fall did not go well. While the mostly wireless installation was a breeze, I do live on the edge in terms of cell data service and Yacht Protector has since switched from Vodophone “Global” to an AT&T service that will likely work fine here and elsewhere I cruise (possibly excepting further downeast in Maine).

YP has also gotten many new features since I first looked, like an optional interface to various Dometic climate control systems, fault codes included, and I’m told that an engine monitoring option is coming. I also understand that YP is working with certain boatbuilders to build in hatch and door sensors, which would be great as they are usually painful to rig on a finished boat.

Yacht Protector is the U.S. version of Spain-based Dokensip — where you can see more possible features like an image capture sensor — and longtime marine distributor Yacht Group makes its home in Coral Gables, Florida. That’s why trying the free and easy Yacht Protector live demo will take you to app screens like the ones I captured above. I don’t think that you can actually mess with the real boat’s conditioner, but it’s certainly a good way to see how this system works and get a taste of remote boat monitoring and control in general. 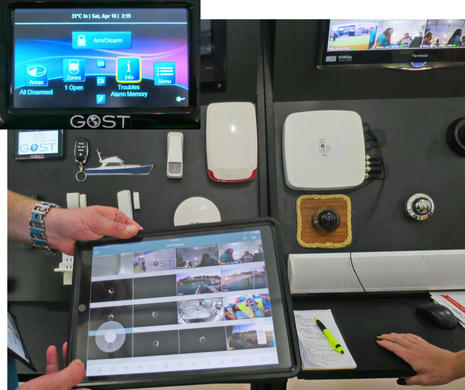 Global Ocean Security Technologies (GOST) has been in the boat monitoring business since before they were GOST, and just last week their venerable Nav-Tracker 1.0 was key to the recovery of a stolen Yellowfin well on its way to Mexico (hi res tracking here).

But what they were showing off in their Miami booth was the new GOST Watch HD XVR, which can be combined with all sorts of cameras including FLIR thermals to surveil most every aspect of a yacht. With GOST Watch you can remotely monitor multiple cameras with a phone or tablet, and though it took a while due to the slow boatshow WiFi, the demo above did eventually and impressively show all 16 live video streams. (And note the nifty Leatherman Tread multi-tool on the wrist of GOST CEO and master gadgeteer Jay Keenan.)

In my experience, no manufacturer is close to Maretron in terms of deep sensing, alerting and alarming for mid-size vessels, and they also offer ways to extend the monitoring off the boat (control too). They’ve been refining their flagship N2KView software in recent years, with the latest (and least expensive) generation running in this MBB300C dedicated PC. I thought of effective N2KView alarming when I read this gripping entry during the Atlantic crossing of the good ship Dirona.

But given 37-foot Gizmo’s size (and budget), I’ve long been interested in getting Maretron monitoring without a PC. That’s why I celebrated the DSM150 in 2013 and was pleased to see the much better looking DSM410 appear last week. One is headed this way for review, and I also purchased another TMP100 to extend the excellent engine temperature monitoring I’ve already been experiencing with only Maretron displays and ALM100 audio. (While my focus with this gear is onboard monitoring, the SMS100 offers a relatively simple offboard link, though I had local cell card trouble in my 2013 testing.) 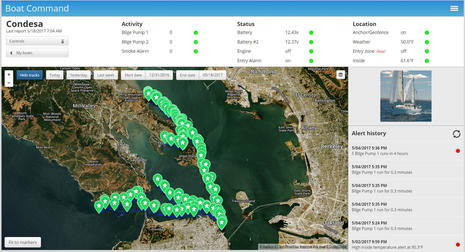 I did not see Boat Command in Miami, but I know their notably inexpensive offboat monitoring system continues to perform well. It was simple, for instance, to move my test unit to our house, so I could make sure the furnace kept running while we vacationed in St. Lucia. And thanks to BC’s easy sharing feature, I can see that Steve Mitchell’s thoroughly reviewed Boat Command system is running fine today in Seattle, and so is Clark Beek’s near Sausalito.

The infamous Capt. Beek even figured out how to rig a BC smoke alarm — showing OK on screen above — and, in fact, installing such monitoring systems is one of his post-circumnavigation work activities. Fortunately, though, Clark continues to blog at Condesa.org and he still does not own a helicopter. 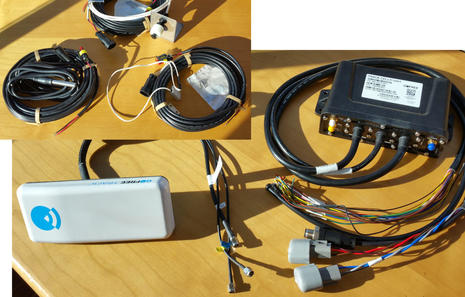 Finally, GoFree Vessel also seems somewhat behind schedule — you may detect a theme here — though the Track hardware component is now available for purchase. It’s seriously well designed and manufactured hardware, as I saw when installing the beta test Track Cell-Fi kit above on Gizmo last fall. Even the sensors come with heavy cables, quality connectors, and a pigtail design to ease installations.

Unfortunately, the Track cell connection doesn’t work in Camden harbor — Vodophone “Global” service again — though that situation has shown the smarts of its having WiFi too. In fact, the Track stayed connected to marina WiFi for months at a time last winter providing the very basic monitoring in Vessel’s free WiFi SD service, and when I have gotten underway, it stores the data in its prodigious memory until it gets another chance to post the trip online (below). However, none of the “HD” service plan features have been enabled yet, and therein lies much of the GoFree Vessel goodness I described last October.

So I didn’t test as much monitoring as I’d hoped during Gizmo’s Camden winter in the water, but there’s still a lot of 2017 left and this fall I’ll hopefully be watching the boat in southern marinas and anchorages when not happily aboard. And I did just enjoy a conversation with a local who bemoaned the winters he kept his schooner in the water, mainly for the times he felt obliged to check her bilges and batteries. I’m confidant that Gizmo’s test Nautic Alert system handled those chores better, and with far less pain (and note that numerous new NA features like intrusion and shore power detection are in the works and at least scheduled to arrive this summer). 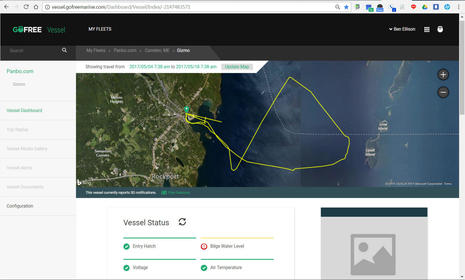