Actually, near-freezing air temperatures do sharpen a guy’s appreciation for design details that lead to fast, easy installs. In the case of swapping the Simrad Halo24 with the 4G radome radar that I began testing in December 2011 (yes, the timing has often been chilly), it would have been quite easy if I had had the little 3G/4G to Halo converter cable. But I was able to attach the single data/power cable while still inside Gizmo’s cozy cabin, which was appreciated as the four little screws that effectively fasten those two cable strain relief straps could be a hassle even in certain warm conditions (like when up a mast).

Incidentally, the Halo24 — like the Halo open-array radars introduced in 2015 — has LED accent lights, though they’re hard to see in the little steps on both sides of the cable port. They glow blue apparently, and I look forward to seeing the effect (though they can be turned off if that’s your preference). I’m impressed with Navico’s latest system for converting a standard RJ-45 Ethernet plug to their own (orange) more secure and waterproof marine version. The plain RJ-45 and bare power wires should be fairly easy to fish around a boat, and then it’s just a matter of getting the fittings and gasket in the right order to achieve a waterproof and compact connection. In fact, it’s compact enough to fit through Gizmo’s existing flybridge hole and cable gland, so I was also able to complete this task in warmth.

Thankfully absent from the Halo24 install requirements is the Navico (Ri10) interface box needed for 3G/4G MARPA and chart overlay. So besides losing the module itself, Gizmo gained a spare NMEA 2000 network connection and a 12v power feed, though I did have to reroute the new Ethernet plug. The Halo24’s backside label indicates that the Simrad, B&G, and Lowrance models are essentially the same, though that doesn’t necessarily mean that a user will see the same radar features on the different brands’ various multifunction display models.  Note too the red LED Status light, which can indicate various conditions like low voltage, no Ethernet connection, or operating normally. It was wonderfully easy to swap the Raymarine Quantum 2 with the original Quantum Q24 first tested in late September 2016. That’s partly because the Q1 to Q2 is less of a solid-state radar tech jump than Navico made moving from FMCW 3G/4G to pulse compression Halo24, so I could use the same pair of data and power cables already fished up Gizmo’s mast. But it’s also because those cable connectors and the strain relief bar don’t require tools (even with a gloved hand).

Coincidentally, my first Garmin Fantom 24 testing was also in late fall Maine (though I had already been impressed with the Furuno DRS4D-NXT’s Doppler features that summer). But it’s been unseasonably cold here — 18°F at almost noon today — so I’m not sure when I’ll get underway to compare all this radar goodness, or if there will be moving vessels beyond the Maine State Ferries.

{Ahem… operator error, see PS below}. But meanwhile, the Axiom 7 fully recognized the Quantum2 on startup and I was surprised when the default Doppler mode showed a close target coming my way from the port quarter in what seemed like a dead quiet Camden Harbor. 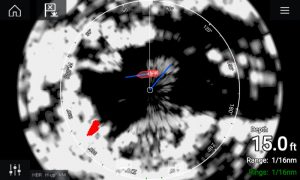 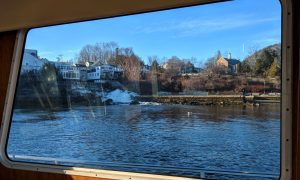 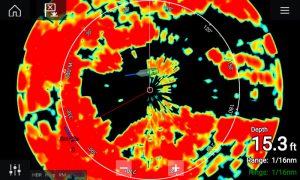 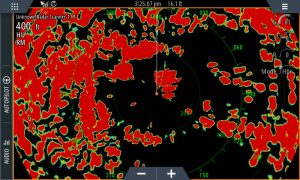 The moving target was the waterfall (that you can also see a bit of in the top photo), and while the waterfall is not moving across the ground, the water sure is (and the resulting current has already taken out one Gizmo fender). It’s an impressive example of how Doppler radar pings can instantly detect target motion even in the severe noise created by a steep, rocky shoreline and buildings. I also saw the Quantum 2 highlight a moving car in the Public Landing parking lot today.

Note how Ray’s Q2 images two relatively small buoys (toward the waterfalls) in true color mode but not in the muted Doppler mode background, and the Halo24 images them even better. But I don’t think I’m seeing all that the Halo24 has to offer yet. My guess is that these are both very capable modern radars and I look forward to more testing.

PS 12/9/18: It turns out that the issues I was having with Halo24 yesterday were not because of a software update that’s about to come out; Gizmo’s system needed Version 18.2 that was released in September, and that yours truly only thought he’d applied. Behold the difference: 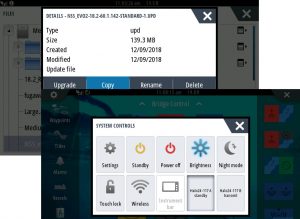 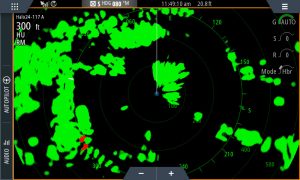 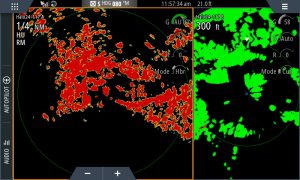 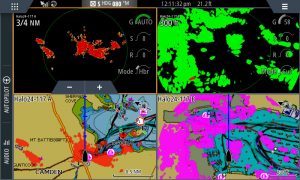 It was easy to update the NSS Evo7 using an SD card — and might have been even easier over WiFi — and the MFD immediately recognized the Halo24 on the network. In fact, it saw two Halo radars because that’s one way that Navico expresses the true dual range nature of models like the 4G and the two Halos. And, sure enough, the Halo24 Doppler (called Velocity Track) identified the Camden waterfall much like the Raymarine Quantum 2 can, and the Halo is at a disadvantage given the aft obstructions that go with its flybridge mount.

On the third screen, I’ve used dual range to better illustrate the Halo’s limited ability to see aft through the Gizmo’s gaggle of flybridge electronics. Note how the two ranges are using different color pallets and how I’ve turned up the gain on the 300-foot range to improve imaging aft. Navico’s dual range really is like having two radars and there may not be another system that can show dual range radar simultaneous with dual radar overlays. And that’s on a 7-inch evo2 that’s a generation old.

I’ve also heard that Navico is close to offering Doppler-assisted ARPA — that’s automatic tracking, no manual target picking required — on the Halos, and I was suprised yesterday to discover that Raymarine already has. That means that Halo and Quantum may be in reach of what I find so outstanding and useful about Furuno NXT radar. Both these new radars seem to have serious horsepower.