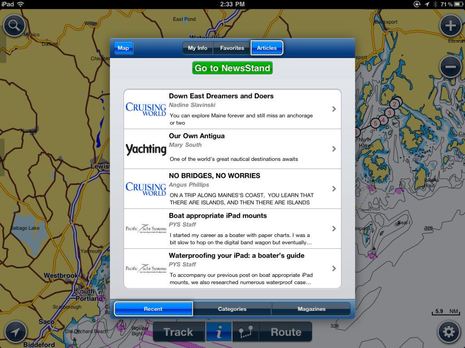 Months ago I heard that Navionics was planning to add boating magazine content to its mobile charting apps, but I didn’t know until the new 2.0 version came out that “my” Bonnier Marine Group was a lead participant! The implementation is pretty slick too. As long as your iPad or iPhone is online you can browse the “NewsStand” for cruising pieces relevant to your location or for articles listed by various subject categories or even ranked by reviews from fellow Navionics Mobile users. And you can download and read them two ways…

First off there’s a simple text version with custom font sizes and thumbnail photos you can click bigger, which works pretty well on an apps phone, and also available is a PDF file of the original magazine layout that’s my preference on a pad. All your downloads are organized into a “Library” that can be searched in various ways and that of course can be read wherever you are. There’s not a huge amount of content available yet, and here’s hoping that it continues to expand, but Yanks should note that if they turn on “Other languages” in NewsStand settings they can also get a taste of European boating pubs. Overall, NewsStand is a heck of a bonus feature for an app that already delivered a lot of value. 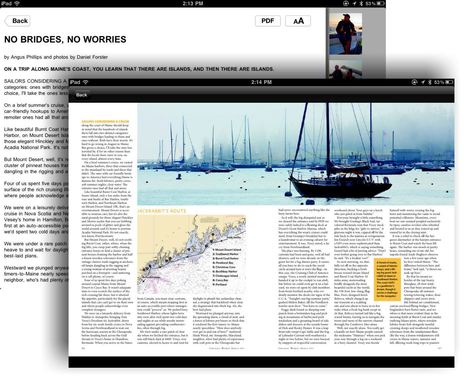 The various Navionics Mobile 2 apps also introduce an improved interface and a useful feature called “My Info”.  When first opened, it will look for sun, moon, tide, current, and wind data for your location, but you can easily add more tide and current stations and even whole My Info pages for other locations. As you can somewhat see in the screen below, I now have four My Info screens, including one for Portland so I can quickly see what’s happening 70 miles to weather. Plus you can tap on a tide or current prediction to get the full mini app, and tapping on the wind speed will get Mobile 2 to download a large area of wind speed predictions and animate them over a few days. Of course you have to be online for wind data, and it would be nice to also get temperature, humidity, cloud cover, etc. but maybe that’s on Navionics’ road map… 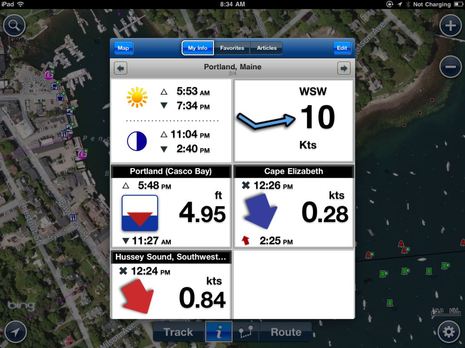 And I’ve got some other suggestions for Navionics. For instance, I thought that the full Bing photo map I get when I zoom all the way in on Camden in Mobile USA HD was a new feature until I realized that the behaviour is only true in few places. But check out the valuable details seen on the screen below; you can even make out the shallows just northeast of Wayfarer’s travel lift docks. Of course the quality of these photo maps vary a lot — which is why it’s nice to have a choice of Google or Bing — and you need to be online to get them, but it would be neat if Navionics let you see the water portion of the photos if you want.
I’d also like the option to see a link list of all the POI info for a given screen area, as is done on the ActiveCaptain site and on Coastal Explorer’s Guide Book screen. It’s tedious to tap on the individual icons, especially in an area where there’s lots of interest. And it’s worth noting that Navionics User Generated Content (UGC) hasn’t caught on like AC yet, at least along the U.S. East Coast, though it does let users suggest edits for nav objects like bouys and ledges that AC doesn’t really cover. UGC may need an overhaul.

But no one can say that Navionics hasn’t been busy. Besides Mobile 2.0 — which is available for many of the iPhone and iPad chart regions now and will probably come to Android and Nokia versions eventually — the “Freshest Data” strategy seems to be fully up and running. At least I know that I can easily update the various 2011 chart cards I have as well as the Mac and PC app regions that I downloaded using the vouchers that came with those cards.
Note too that new “Sync my data” feature seen in the dialog box below, which is supposed to back up routes, tracks, etc. to Navionics servers and distribute them automatically to other devices like an iPhone. It isn’t quite working for me yet (possibly due to multiple registrations), but it may be for others (?). Plus at least theoretically the Raymarine e7 I hope to test soon should do direct Plotter Sync direct to Navionics Mobile running on either iPhone or iPad. The “Navionics Anywhere, Anytime” program I wrote about in Cruising World earlier this year is happening.  Come to think of it, CW should make that article available for the Navionics NewsStand! 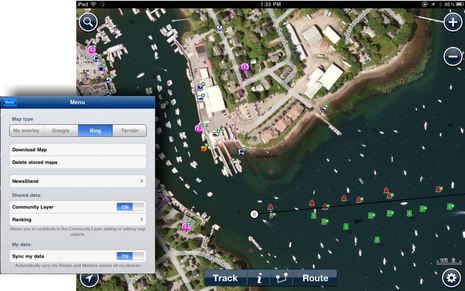