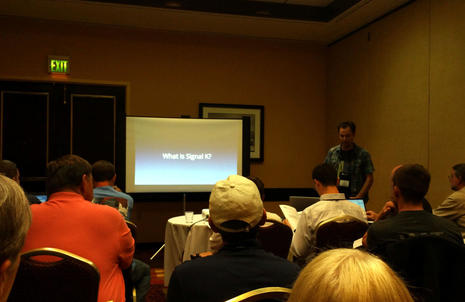 While the big manufacturers showed off some great stuff at the NMEA 2015 Conference, there was also a lot to get excited about in the seminars and expo hall. Discussion of the open source Signal K marine data protocol, for instance, was not just a NMEA first but drew a standing-room-only crowd, twice. Soon I hope to list some of the interesting small and medium-size developers who are adopting SK and also share some good news about how interested boaters can get involved in the first public gateway project. In the meantime, here are some of my Conference highlights… 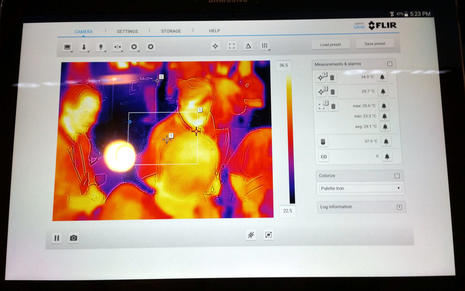 First up is the new FLIR AX8 Marine Thermal Monitoring System, which strikes me as notably innovative technology. In real life the image above would likely be one side of a large diesel engine or some other thermally active systems area, and you’d most likely be looking at it on a Raymarine MFD, which just got AX8 integration with LightHouse Release 15. But my NMEA expo hall photo — click it bigger — does show the alternate browser interface that must be used to set up alarms for up to six temperature spots or boxed areas within the camera’s 48° by 37° field of view. It also shows how the AX8 can use the edges detected by its 640 x 480 pixel video cam to make the 80 x 60 thermal image much easier to understand.

While a Raymarine MFD system can control many AX8 functions, as I hope to see soon at the Fort Lauderdale Show, it is somewhat awkward that you have to use a browser for configuration tasks like alarm setting. On the other hand, the tablet above is talking to the AX8 through a Ray MFD WiFi access point and could be online via the MFD as well, which is another new feature of LightHouse 15. (Incidentally, a Ray system can handle up to 8 of the all-IP $1,200 sensor/cameras, which are apparently also available for integration by other manufacturers.) 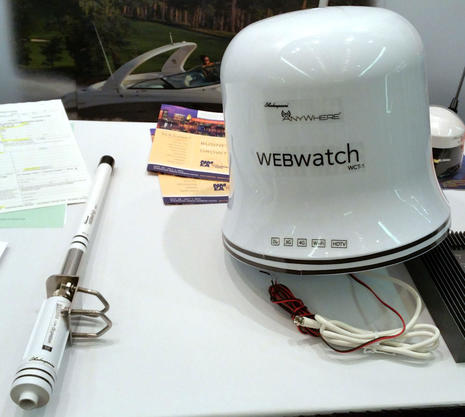 Speaking of WiFi, look what I saw in the Shakespeare Marine booth. Their WiFi Amplifier page is just a tease right now, but obviously they are about to offer a Ubiquiti-Bullet-based system like the Rogue Wave and many others (and, yes, the WebWhip will also have an easy browser interface). Meanwhile, the unique and shapely WebWatch dome will purportedly offer WiFi boosting along with 2/3/4G cellular data, an onboard hotspot and Ethernet router, and an HDTV antenna. Given that Shakespeare probably has the largest marine antenna distribution network, at least in the U.S., it sure looks like this stuff is going mainstream.

The new Humminbird Helix 7 series shows how the glass bridge style is nicely working its way down to small boats. There are many functions and networking options they lack, but hey, that’s an 800 x 480 pixel bonded 7-inch display with 1500 nits of LED brightness that starts at about $350 for the dual beam sonar only model. Plus,when I started yammering about rehabbing the original 14-foot outboard Gizmo — now L’il Gizmo — so I can better test some of the new sonar gear plus do some recreational lobstering, the Humminbird guy got excited about how I could use their Side Imaging sonar to optimize trap placement and then use the MFD i-Pilot Link and a saltwater Minn Kota to automate the hauling process. It sounds like a neat project, but how will the real lobstermen react? 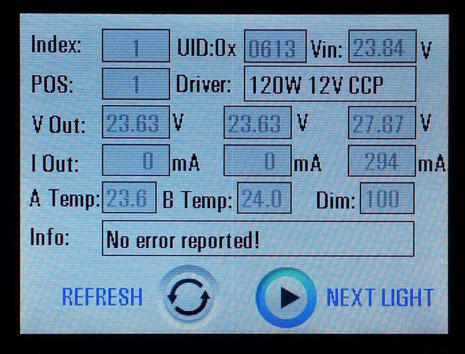 The NMEA Conference is naturally oriented to more complicated, higher-end installation and service situations, and here’s a good example. That’s the display of a nifty Lumishore EOS underwater light controller, and normally you’d be seeing the elegant screens you can use to change light colors and intensity, initiate “sweeps” or even fine tune how your luminous yacht bling integrates with your sound system. Bass in red or blue tones?

The extra cool part is that EOS uses the bi-directional open DMX512 RDM lighting standard, which means that third-party systems like Crestron’s can also control the lights, and moreover means that the lights themselves can talk to the system. So the geeky screen above shows the intimate internal details of a complex LED module, possibly installed in some remote corner of a boat without having to crawl there let alone pop the fixture. Lumishore — which won the first ever NMEA underwater lighting award — is bringing EOS down to smaller lights with a mini controller and Ocean LED is also working with DMX512, all of which I hope to learn more about in Lauderdale. 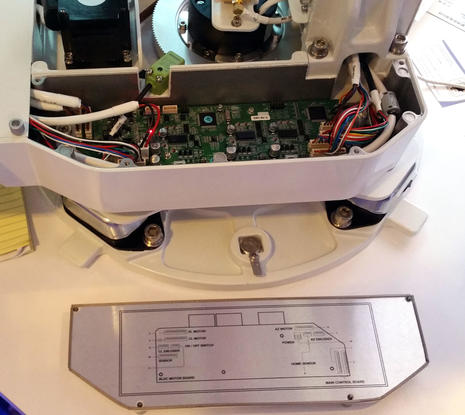 I failed to photograph the ultra precision machining seen around an Intellian GX60 antenna’s waveguide, and the fit and balance of the superlight carbon dish are also wondrous, but I did capture the diagram printed directly on the underside of the aluminum cover to the main electronics box. You can almost hear the murmured “thanks” of the tech who’s working way up in a ship or yacht antenna farm, perhaps on a windy day. Inmarsat’s third I-5 satellite is launched, which means that Global Express Ka-band high speed service is about to actually become global. Precision is what it takes to use such a distant and high frequency source from a moving platform, especially with a relatively small 26-inch dish, and it looks like Intellian has nailed it. But will Kymeta panel technology make satellite radomes obsolete? Color me skeptical but I am going to their Lauderdale presentation. 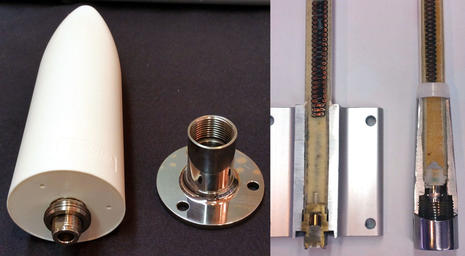 Here are more reminders that marine electronics is as much about good mechanical engineering as it is circuit boards and firmware. On the left is the Digital Antenna Bullet that’s been working well with Gizmo’s cell booster, but now the mount doesn’t require the installer to drive little screws upside down while in the rigging. On the right are cutaways showing how Comrod marine antennas are completely filled with high density polyurethane foam, which seems to justify their claims of high durability and also explain their popularity with pro installers. 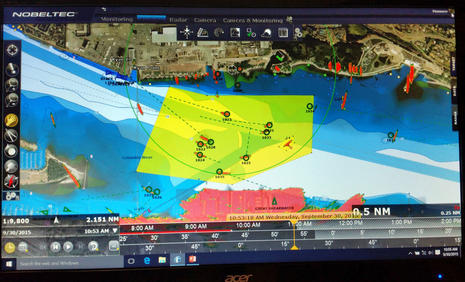 Then again, good software can make well-made electronics sing. Nobeltec TimeZero Coastal Monitoring was impressive when I first saw it, and now it’s amazing what it is providing to fish farming operators, dormant oil platform minders, resource protectors (in the Galapagos), and possibly many other applications given a starting cost of about $30,000. We watched a demo showing how well it can use superfast ARPA (coming eventually to Nobeltec PC Radar) and AIS to detect any vessel moving in a desired area, and then use conditional rules to take actions like zooming a camera in on the vessel, taking a still photo and texting it to an operator. Boaters like to save money by using consumer electronics instead of dedicated marine stuff, but here’s a case where a well integrated recreational marine electronics bundle looks like a bargain compared to the normal solutions. It also seems like a good opportunity for dealer/installer to drum up new and unusual clients.

Finally, here’s a helm shot of Impossible Dream, the universally accessible 60-foot sailing cat that several NMEA member companies recently supported with an extensive and collaborative electronics redo (that was still being fine tuned before the Baltimore reception ;-). It seems like a great story on several levels, and I’ll try to tell it eventually, but in the meantime look for the Dream enabling boating joy around Biscayne Bay from her base at Shake A Leg Miami. 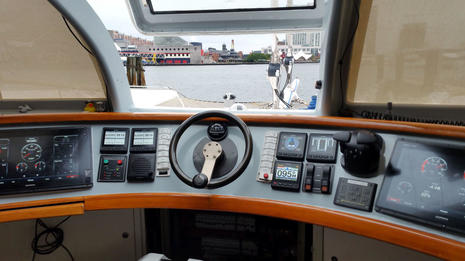