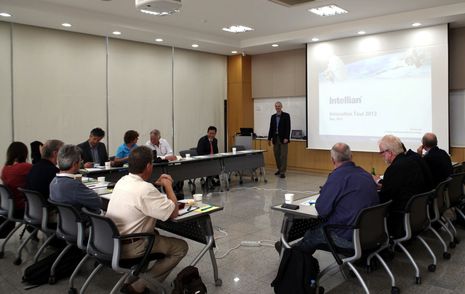 Intellian Technologies has come a long way since they first introduced their own brand of satellite TV antenna systems at the 2008 NMEA Conference, where I first met them. In fact, the company may well be the fastest growing in marine electronics, going from 77 employees in 2010 to 160 today. Intellian has also gone from supplying only the relatively modest end of the marine TV antenna market to all size vessels, broadband satellite communications definitely included. The company story is interesting on many levels, but there was a particularly telling moment as Global Marketing VP Paul Comyns (standing above) and CEO Eric Sung (to his left) addressed the group of American and European boating journalists that Intellian hosted in Korea. 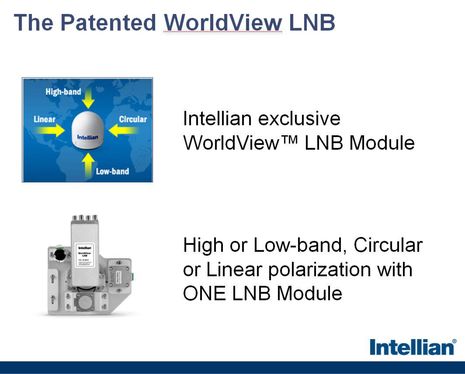 The moment came as Comyns showed the slide above, one of several illustrating Intellian’s innovations over the years. A writer asked if this meant that no other antenna system could move around the world from one maddeningly different satellite TV technology to another without hardware modifications? That’s when Sung stepped in and graciously noted that competitor KVH had developed its own solutions to the same issues. I think that’s a classy way to do business and one of several reasons that Intellian has thrived. 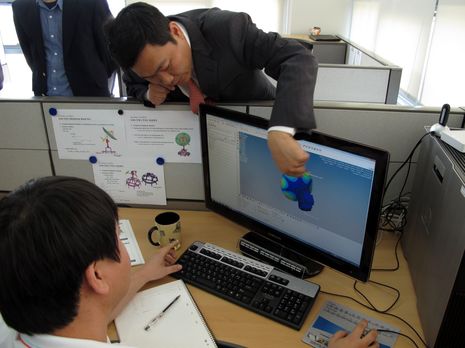 Also impressive was how familiar Sung seemed to be with every technical detail of his business, and there are many. In the photo above he’s explaining how the stress modeling software being run by that engineer allows them to refine designs even before they build prototypes. We saw a LOT of engineers 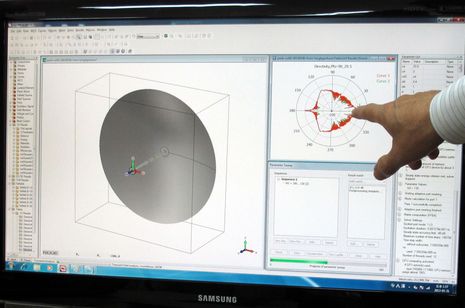 The hand above belongs to Dr. Kevin Eom — Senior Director of the substantial R&D portion of Intellian’s facility outside Seoul — and that software is modeling how well a particular dish design can gather microwave transmissions. It was running from a Dell work station and a pair of Nvidia Quadro Plex external graphics processing units that purportedly constitute near supercomputer power. 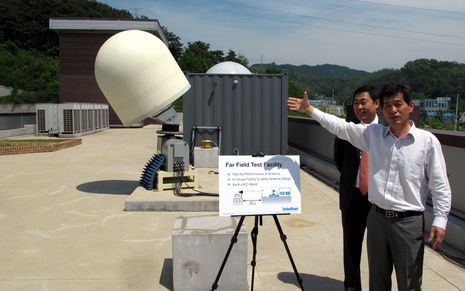 In this photo Dr. Eom is explaining the roof-top test facility that is the next step in the R&D process. The Intellian building is sited on a south-facing hill so that all sorts of research and product quality testing chores that involve geosynchronous satellites can be done through large windows and garage doors, but that doesn’t work for satellite communications that don’t actually exist yet. The antenna being tested will support Inmarsat Global Express (GX), a system that will soon be providing global broadband at up to 50 Mbps, and the signal it’s receiving is coming from the roof of nearby building that fortuitously belongs to friend of Eric Song. The latest feather in Intellian’s cap is a partnership with Inmarsat. 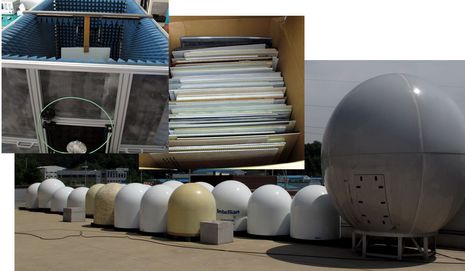 The collage above starts with a roof top collection of antenna domes, mostly GX size, that was one of my several lessons in how complex this technology can get. Intellian reports that they’ve invested nearly a million dollars just in perfecting the GX dome material so that it has minimal impact on signal strength while still protecting the antenna hardware. The insets of a test chamber and a box loaded with materials already tested tell more of the story. And, yes, this means that you can not simply paint a satellite antenna dome with any paint you please. 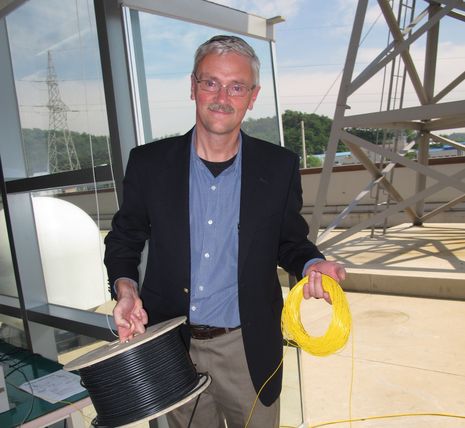 This is a photo I feel guilty about. Paul Comyns was discussing the weight (and signal loss) differences between standard coaxial cable and the skinny fiber optic lines that Intellian now offers for some of its large systems when I asked him to pose with the different cables. He may be grinning but the poor man’s right hand is hurting from hoisting that coax spool while I adjusted my camera. Incidentally, Intellian has developed a cell phone amp system that can boost the signal in a whole building, even elevators, via fiber optics, and they’re thinking of marketing it beyond Korea. 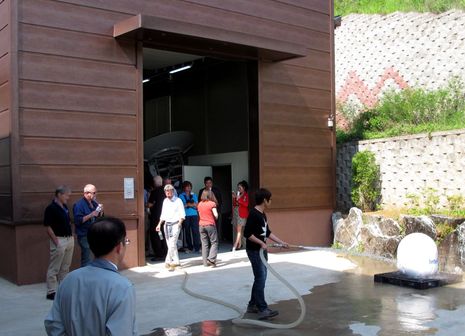 The picture above shows a demo of a fire hose antenna waterproofing test, but the more impressive test gear lives insides that handsome extension of the Intellian facility. Inside are chambers able to subject even a large antenna to a temperature range of -50°C to +150°C with humidity of 20 to 98%, plus a scary machine that can torture gear with 3 axis vibration up to 150KHz and 25G x 11 millisecond shock loads! 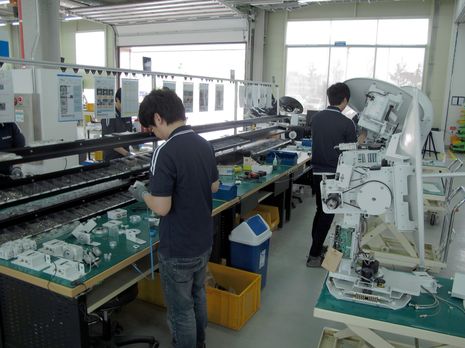 Now we’re in Intellian’s first floor factory section. While a lot of modules and parts are understandably contracted out to other manufacturers because stabilized satellite antennas is such a low volume business, check out how many bits and pieces are involved in assembly. Another thing I noticed around the building was how many of the postings like those illustrated “how-to” sheets are in both English and Korean. Eric Sung confirmed that language skills are a high priority for his global company, which I’d already noticed on the marketing side. 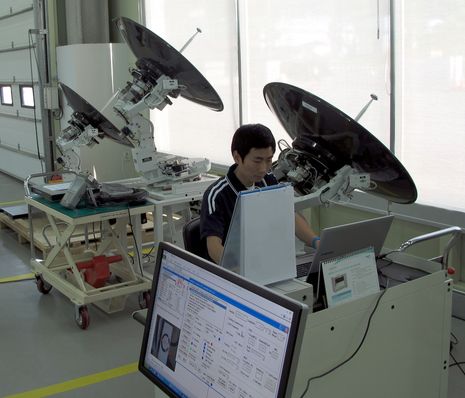 Here are some high-end v100GX vSAT antennas — distinguished by their carbon fiber dishes — being tested on the south side of the production floor. The testing screen set up for our tour shows what looks like an advanced version of the Aptus PC and iPad app that’s available to installers and/or owners of many larger Intellian antenna systems. 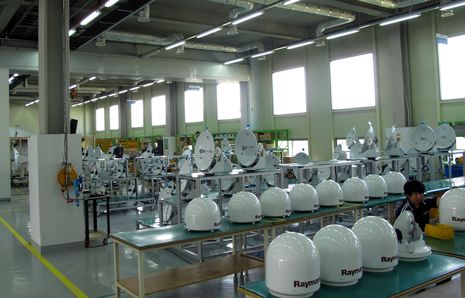 The south windows are so tall that antennas can be set up for burn-in testing even on the north side of the factory floor. Note all the Raymarine TV antennas, which speak to Intellian’s origin story. Apparently Eric Sung and a few associates from a previously successful software company founded Intellian in 2004 along with some engineers who had been working on small stabilized antennas until their company cancelled the project. One of the first tasks on the sales side was to explore the existing market at hot spots like the Ft. Lauderdale Boat Show. Once they concluded that market entry was darn difficult, they aimed at persuading the largest existing brand to sell their antennas under its brand, and they succeeded. I theorize that that’s where the young company’s excellent language skills first came into play, and hence the ‘articulate’ in my title.
I may overemphasize language skills because I’m a word guy, but I can’t count how many foreign companies I’ve met which seemed to have good ideas but I couldn’t really tell because I couldn’t really talk to anyone. Or how many electronics brochures I’ve read that are badly marred just because the company failed to have it edited by someone who really knew vernacular boat English. And, yes, I realize that Americans like me are terrible about learning the languages of the world, but the fact is that English has become the international language of business and technology. Sorry!
At any rate, Intellian obviously knew this lesson at the get-go. And a further testament to how smartly they do business is the fact that Raymarine has stuck with them even after they became a direct competitor. 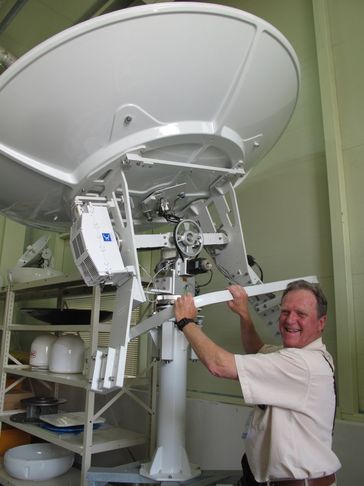 Yes, I’m often willing to ham it up for a camera. But what was notable here was how little muscle it took to steer that 2.4 meter v240C C-band antenna. The careful balancing means that the stepper motor has less work to do as a ship rolls and pitches beneath. And this is what I mean by how Intellian now covers the whole gamut of marine satellite antennas. Which you could also see if you visited the Korea International Boat Show. That’s just the backside of the company booth seen below, and note that Korea does not yet have many recreational boats big enough to be Intellian customers. I think the company was there largely to support their nation’s growing marine industry, which also seemed to be a partial motivation for the journalist tour. Also classy, I think.
And would you believe that I’m off on another interesting marine electronics junket? Yes indeed, tomorrow I fly to Sweden for a week of sailing, powerboating, and company tours hosted by the fine folks at True Heading. I will report. 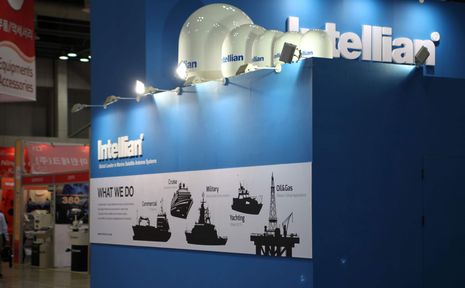