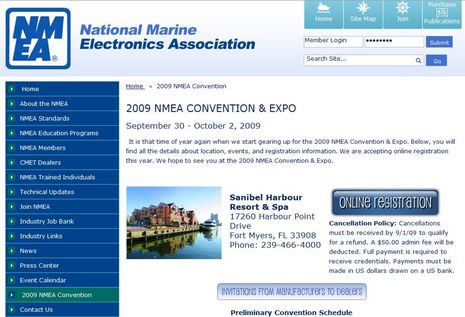 The 2008 NMEA Convention in San Diego prompted many Panbo entries last October, and I’m hoping the return to Fort Myers this year will be at least as interesting.  One new feature of note is a Technology Award that will be judged by yours truly and three other BWI boating writers. The criteria will be “a combination of innovative design, benefits to boaters, practicality and value,” and the NMEA has wisely chosen to limit manufacturer entries to products that were not available for sale and delivery sixty days before the 2008 convention but are available sixty days before this show.  In other words, no vaporware please!

At any rate, I hope that lots of worthy products are entered — hey, it’s good exposure even if you don’t win — and that those companies which don’t win go easy on the humble scribblers who try to decide which product is best 😉  Also, if you’re in the biz but undecided about attending this year’s convention, let me note that the room rates are lowest I’ve ever seen for this fine resort/conference center, and the program seems more tightly organized than ever (in fact, I’m trying to figure out how to be in two places at once). Come on down!
And while you’re at the NMEA site, you might appreciate the treasure trove of presentations I stumbled on there recently. This is a series of presentations given by NMEA techs at the May RTCM meeting, and they cover the organization’s latest efforts regarding NMEA 0183 — version 4 is here, with many AIS improvements plus something called TAG Blocks that I don’t understand yet — and NMEA 2000. The latter, both a presentation and a more detailed white paper, describe the work being done to make N2K a fully redundant IEC-acceptable big ship protocol, and also note some development goals like below.  Good stuff. 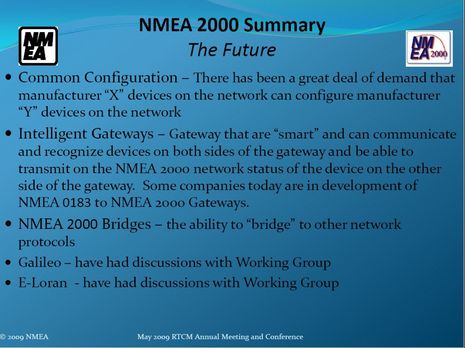