Onboard WiFi and cell booster strategies, the diagrams 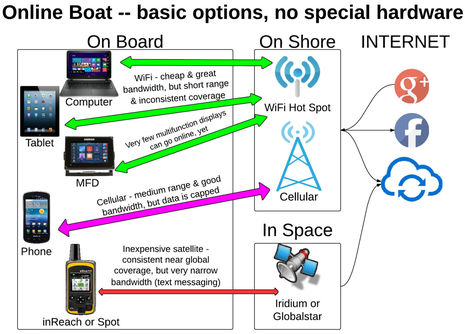 I’ve given numerous seminars about what modern mobile communications can do on boats these days and I’ll be presenting the latest version at TrawlerFest’s new Essex, Connecticut, location in early June. Aside from guidance about useful apps and the neat ways phones, tablets, and the Internet are integrating with marine electronics, boaters want to know how to improve their WiFi and/or cell connections with shore. But when I start talking about typical methods of installing wireless boosters, confusion sometimes follows! So, I’m working on a series of diagrams that Panbo readers might also find useful…

The first diagram (above) is meant to show what happens when your boat doesn’t have any “coastal Internet amplification” systems (“booster” is not really the right term for much of what I’m going to describe). You may have lots of devices that can get online via WiFi, but it’s apt to be troublesome as their internal WiFi radios are weak and meant to use closer Internet access points (hotspots) than where our boats usually are. Plus, you have to sign each device into a new hotspot every time you move.

Of course, cellular has much better range and consistency along populous coasts, but the era of unlimited data plans is fading (I just finally gave up mine), and even a big, bright phone (like my new Samsung Note 4) isn’t all the computer many of us want on board. Also, cell tower networks are not designed for boats even a few miles off shore. While this discussion doesn’t get into the satellite Internet connections that blue water cruisers (and high budget boats) get into, I do like to let coastal cruisers know about the two-way texting (and tracking, distress, etc.) available with an inexpensive DeLorme inReach and similar (I’m about to test a YBTracking YBi3). 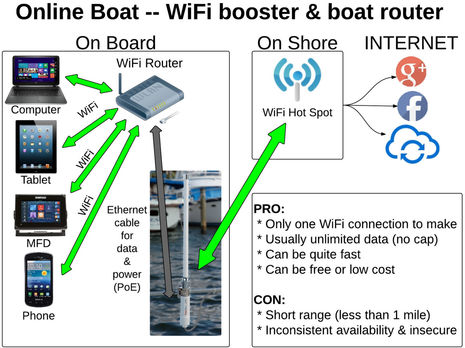 Improving WiFi performance is the most common desire of cruisers, and I believe that the preferred solution nowadays is a high power WiFi bridge connected to an onboard WiFi router. There are integrated devices that can do all this in one box, like the WirieAP+, but diagrammed above is the popular install in which a marinized Ubiquiti Bullet M with a high-gain omnidirectional antenna is mounted above deck with an Ethernet cable running to a standard WiFi router below (and also carrying 12 volts to the Bullet). With a rig like this, many of us have seen at least ten times better WiFi Internet connectivity than what’s possible at the same location with just the WiFi radio built into a tablet or laptop. Plus, all WiFi devices on the boat can stay signed into the boat router; the only change you have to make when you move is the hotspot the bridge connects to, which you generally do with a browser.

Another plus of this system is that the boat router can be useful even when there’s no hotspot close enough to access with the bridge, though this is an even more difficult concept for some folks to digest. WiFi is just a wireless networking protocol, not necessarily an Internet connection, and it can be useful to, say, stream AIS and other NMEA data from a Vesper Marine XB8000 or similar to mobile screens around the boat. I think we’ll see more and more apps that can use boat data streaming through a router, both for display and to upload to the cloud when the router is online again. I should probably create another diagram to make this point (incidentally, I used the free web app LucidChart to create these diagrams, and am impressed with it.)

At any rate, I recommend spending a little more on a marine WiFi bridge (booster) system that includes software especially designed for easily finding hotspots, like the Wave Rogue I first tested in 2010, as well as the WirieAP+, the WiFi Ranger (I’ll be further testing in May), and — a new contender — the Coastal Marine WiFi system (which even lets you select hotspots with a dedicated app). If you can handle the complex native software that comes with the Bullet and similar high-power bridges like the MikroTik Groove can find less expensive systems from well regarded sources like IslandTime PC and Bitstorm. 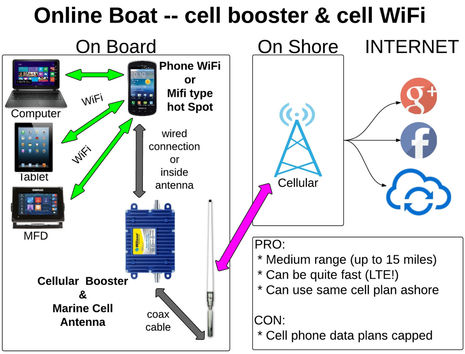 As for boosting cellular signals, there aren’t nearly so many companies offering solutions, especially for the marine market. Plus, they’ve all had to redesign their products in the last year or so to meet more stringent FCC requirements, as I mentioned when I recently reviewed the Wilson Sleek 4G (that’s now called the weBoost Drive 4G). In fact, weBoost tells me that its more powerful Drive 4G-M marine kit won’t ship for a few more months, and I think that Digital Antenna’s new booster is still stuck in the FCC approval process. Shakespeare Marine does have the Halo 4G series, but it’s expensive and you have to choose a model for your specific 4G carrier. If you’re willing to forgo 4G — I wouldn’t myself because it’s worked so well in many places — there are other choices plus second-hand boosters from before the FCC changes.

Any cell booster install is going to look something like the diagram above. You need a marine cell antenna that covers all the frequencies you hope to use connected with low-loss coax cable to the booster below. The Sleek I’m using now has its relatively low power booster built right into the phone cradle, but bigger booster can either use a separate cradle or an indoor antenna that can serve more than one phone at once (though it’s trickier to install). Of course, you can just use the boosted phone itself, but I like using my phone’s ability to create a hotspot to get the Internet connection to some bigger screens (though it does cost more than just a regular data plan). Quite a few boaters use MiFi-style cellular hotspots for this same reason and they, too, can work with boosters.

The final diagram shows how WiFi and cell “Internet amplification” system can work together. It may seem silly to sign on to a cellular hotspot down below with a high-power WiFi bridge in the rigging, but it means that all the devices networked to the boat router remain the same. It also somewhat illustrates what’s going on inside combined WiFi and cell systems like the WiriePro and Glomex WebBoat (which is available in the U.S. as YachtConnect). Are you following all this? Do the diagrams help? 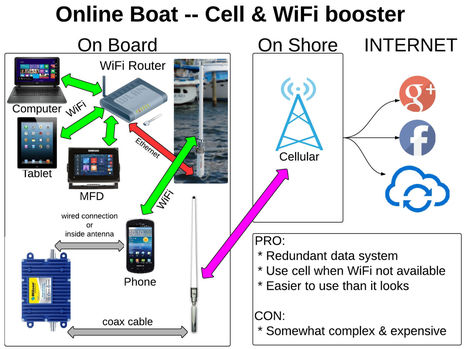