Penobscot Bay Rendezvous, come on up! 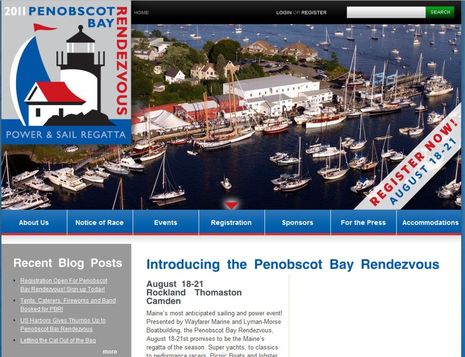 Now that there’s evidence that there really will be a summer in Maine — it went into the 70’s and beyond all last week, with hardly any fog — I want to deliver a rousing endorsement for a new boating event that might fit on your cruising schedule this August or next. It’s called the Penobscot Bay Rendezvous and one thing I particularly like is that both power and sailboats are welcome. The differences between “stink potters” and “blow boaters” are vastly exaggerated, I think, and I claim some expertise as I’ve been both. Of course this also makes sense because at heart the Rendezvous is a public relations event for two premier boatyards that serve all kinds, though I think it will be PR is nicest sense of the term…

The Rendezvous is a joint creation of Lyman Morse and Wayfarer Marine, and I’m sure they’re hoping to impress attendees with their facilities and skills, but I also know that all of us boaters up here share a tremendous enthusiasm for our remarkable stretch of coast, and it’s roomy, and we want to share it. I, for one, am regularly surprised when I meet an experienced cruiser elsewhere and realize that they only have a dim idea about what they’ve so far missed up here. Just click on and gander at that “Down East” Google view below (it’s oriented northeast actually, but down wind for sure on an summer southwest breeze); you could go many, many weeks without repeating a remote anchorage or friendly little port, though you’d want to.
We’re also pretty darn proud of the boat building and repair industry that’s flourished around here in the last few decades. And don’t just think hand planes and curls of oak and cedar. While this is still a fertile coast for traditional building skills — and we’re rich in classic yachts — a lot of the yards have gotten into some very modern construction techniques as well as cutting edge systems. Everyone attending the Rendezvous can see this first hand during guided tours of Lyman Morse (which I once profiled exuberantly) and Wayfarer (where I’m a happy customer), but don’t be shy about visiting other noteworthy yards like Rockport Marine and Brooklin Boat Yard. And note that these two have recently joined together to form the new Front Street Shipyard in Belfast, which will soon sport the largest capacity travel lift in Maine at 165 tons.
At any rate, the Rendezvous starts on Thursday, August 18 in Rockland Harbor, which itself has one of the most eclectic waterfronts anywhere (see my suggested tour here). Shuttle buses will take antendees over to Lyman Morse for tours, a barbecue and fireworks (since there’s not enough room for all their boats in Thomaston). The fleet comes to Camden on Friday, the sailboats via a race course and the power boats via a suggested good-photography route (which will be their form of low stress competition during the event, with nightly slide shows). More tours, racing, gunkholing, and parties ensue. And whereas I’m familiar with nearly all the organizers and caterers involved, I can predict that all will be first class with some confidence. It’s a deal, too, thanks to sponsors, at $180 per person for a long weekend of good food, drink, and fun.
The Rendezvous would also pair nicely with the Maine Boats, Homes & Harbor Show in Rockland the prior weekend, and/or you could slip Down East for a couple of weeks after the Rendezvous and come back for the Camden Windjammer Festival. Summer in Maine may be short — the saying goes “if it comes on a Sunday, we take a picnic” (please add “ayuh” dialect) — but we do pack it full. Consider joining the very first Penobscot Bay Rendezvous. 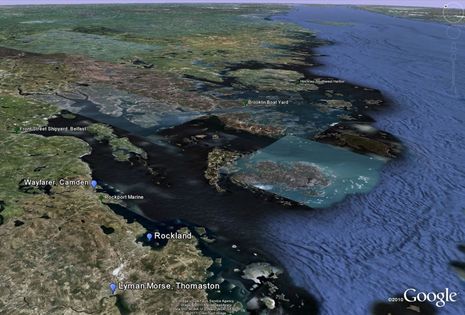