It may be a while before we see the first 5 Watt SOTDMA Class B AIS transceiver actually available for sale, but it certainly is interesting to see a prototype trumpeted in SRT’s Summer 2015 Pulse Newsletter (available here). Given SRT’s main role as an original equipment manufacturer (OEM), we may first see this “new” AIS technology — perhaps with even more features — branded as Simrad, Raymarine, True Heading, Digital Yacht, Comar, etc. (and/or marketed under SRT’s own Em-Trak label). Or maybe Furuno, AMEC, Vesper or another of the independent AIS manufacturers will be first out with SOTDMA Class B? I don’t know. More important is SOTDMA Class B as a new middle ground between the Class A AIS used on large vessels (which also works on the SOTDMA protocol) and the CSTDMA Class B technology that we’re used to… 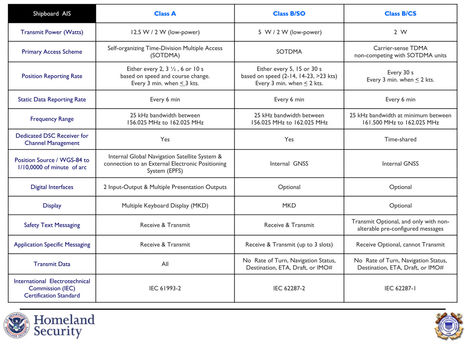 The USCG Nav Center has thankfully published an AIS Class Comparison (click above bigger or PDF download here) that neatly details the differences. Class B/SO, as they term it, cannot only transmit at more than twice the power of familiar Class B/CS, but it’s also permitted to report a vessel’s position — and other dynamic data like SOG, COG, and Heading — at higher rates, particularly when the vessel goes fast. While both forms of Class B omit some of Class A’s static vessel data like Rate-of-Turn and Destination, SOTMA Class B can apparently do more with Safety and Application Specific Messaging (i.e. the growing use of AIS for weather, lock, etc. info). Meanwhile, Class B/SO devices will only need an internal GPS/GNSS like Class B/CS but they will have a Minimal Keyboard Display (MKD) like Class A. 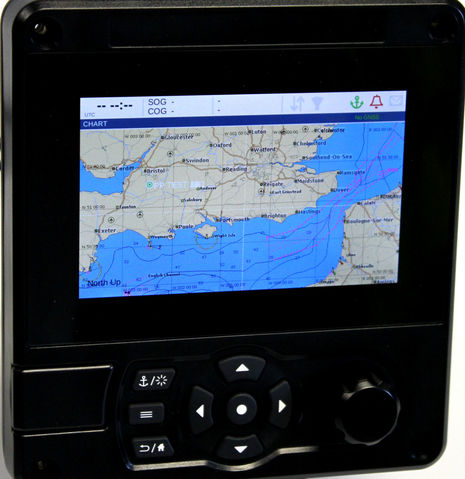 It sounds, however, like SRT is going well beyond a classic Class A MKD when they claim that the “world’s first fully certified SOTDMA 5W Class B…will be a fully integrated, ruggedized IP67 waterproof transceiver with full high resolution ENC chart display functionality and wifi connectivity.” The device also includes ABSEA (Advanced Class B Satellite Enabled AIS), a transparent feature that SRT developed with exactEarth so that even ABSEA-enabled Class B/CS transmissions can be reliably tracked by satellites (like the 72 Iridium Next low-orbiting birds that will start going up in October). The eventual retail pricing for this transceiver/display is not mentioned but Class B/SO seems likely to sit between A and B/CS in this regard, too, and is thus likely to be a “new option for commercial boat owners and larger leisure boats” as SRT puts it. 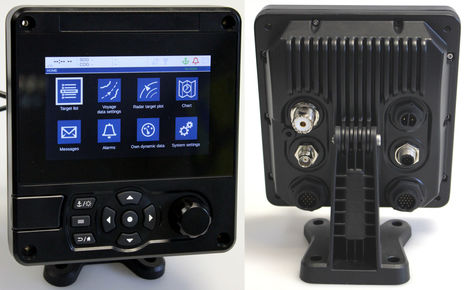 Adding to what SRT published in their newsletter, CEO Simon Tucker wrote that, “Of course the clever bit is the SDR AIS transceiver module inside. This uses our high fidelity core AIS transceiver technology so there is zero error message processing (you do actually see everything) and an SDR core which allows it to be configured in software to operate in multiple AIS modes — including as a 5W SOTDMA Class B per the relevant ITU and IEC specs…The product format itself is our new fully waterproof integrated AIS display platform. Certified IPx7, full charting capability (C-MAP) and wireless connectivity plus all the usual commercial and leisure features such as anchor alerts, etc. and a host of new innovative features.” Sound interesting? Correction 1/6/2020: This NavCen table was flawed. Class B/SO has the same 30-second transmit rate as B/CS up to 14 knots of vessel speed.

Now let’s look deeper at the SOTDMA Class B specification. The Coast Guard’s AIS Class comparison also illustrates what the different position reporting rates mean at various vessel speeds. A Class A ship going 14 knots transmits every 72 meters / 236 feet (or 43m / 141ft if it’s also turning), but a Class B/CS boat also at 14 knots will move 216 meters or 708 feet between its 30 second dynamic data transmissions, which could be a problem in tight, limited visibility conditions. A new Class B/SO would have transmitted twice at that same 14 knots and it gets even better at 24 knots and above when B/SO transmits at 5 second intervals while B/CS stays at its pokey 30 second rate. But does all this make a real difference in practice? 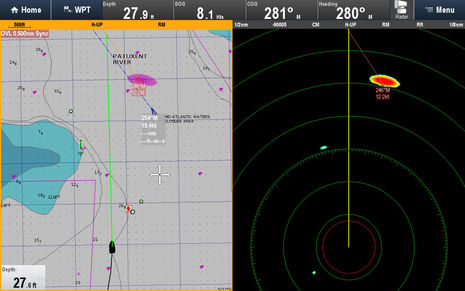 I say yes, though the slow update rate of current Class B transponders has not turned out to be as big an issue as some thought it would be before the hardware finally became available. It does take some getting used to, however. The AIS and radar targets on the Raymarine gS12 screen above are the same boat, and seeing them separated like that is a common occurrence. But then again, I managed to grab the screen close to the end of the fast yacht’s 30 second transmission gap as it blew by Gizmo on Chesapeake Bay last month, and moments later a fresh transmission jumped the AIS target to where the radar was. It’s not ideal, but you get used to it, and most boats tend to move in straight lines.

Incidentally, I’m confident that the target on that screen was doing 19+ knots, not the 12.2kt seen from the much more difficult MARPA calculation (and given the similar headings, that particular MARPA calculation is better than most I see). Target data accuracy is one beauty of AIS, and a higher update rate is one good reason why faster boats especially may adopt Class B/SO transceivers. 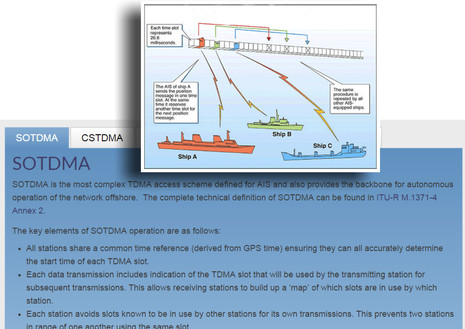 But how the heck did we end up with two Class B AIS standards anyway? Some interesting technical and regulatory history seems behind the story, which I’d like to know more about for a future entry. As I understand it now, SOTDMA Class B was originally intended as the Class B protocol — which is why I’ve been writing it “new” — but worries about patent licensing led the standard makers to come up with the CSTDMA scheme instead. Specifically, while inventor Anders Håkan Lans held a patent on the remarkable Self-Organized Time Division Multiple Access (SOTDMA) technique that allows AIS transceivers to work so well — able to share 2,250 data slots per minute over each of the two VHF frequencies without data collisions or central control — he agreed to forego licensing when it was used for Class A AIS. But later, when the IEC was working on the specifics of Class B hardware, Håkan Lans apparently started talking about collecting a fee and the technician/regulators scrambled for an alternate transmission technique so that Class B could be affordable. So I’ve heard. 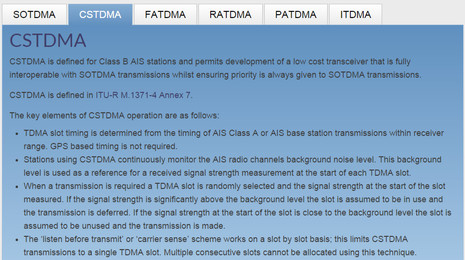 In fact, Carrier Sense TDMA works fine in my experience, and thanks in part to SRT and also to competition unrestrained by licensing, you can buy a decent CSTDMA Class B transponder for 5-600 dollars. But the change from SO to CS Class B did purportedly delay the hardware introduction and caused other issues, especially because the AIS message structure had to be changed a bit to work with CS. That’s why early users of Class B often found that Class A users could not see their boat name and other static data (but could see their boat as target). Such issues sometimes inflated by naysayers or ignorant “authorities” used to drive me nuts. And after all that settled, the same Class B/CS static data message delay plagued the NMEA 0183 to 2000 AIS translations, and thus we got the Shame Sheet! And, finally, I believe that SOTDMA Class B is becoming available now because a U.S. patent reexamination cancelled all of Håkan Lans’s claims in 2010.

All of which makes me wonder how it’s possible that there was a patent on CSTDMA all along, which is now causing some friction in the industry and could possibly increase Class B/CS prices. I hope to write up the story soon, and SRT is again a major character, though readers will have to decide on hero, villain, or neither. In the meantime, I’d appreciate recollections of the Class B/CS standards making process as entry comments or direct to me (anonymity guaranteed if desired). And check out SRT’s useful AllAboutAIS.com to better understand the bouquet of TDMA protocols illustrated below and the main SRT site to see the amazing ways they’re evolving. 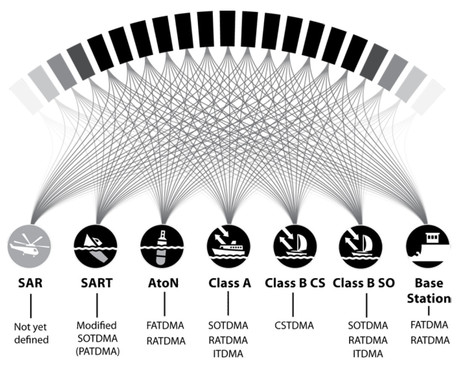 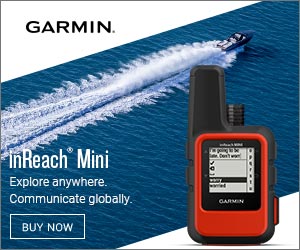