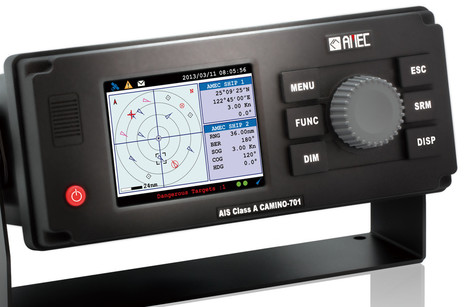 There are several reasons that a yacht or workboat might want to use an AIS Class A transceiver instead of Class B, even if they’re not required to. With Class A you’ll be seen by other boats from a greater distance because you’ll be transmitting at 12W instead of 2, and you’ll be tracked much more smoothly — particularly if you’re going fast and/or manuevering — because the Class A update rate for dynamic data like position, speed, and heading is much more frequent than Class B. The problem is that the total install cost of Class A can be quite high and especially annoying on a modern boat with a NMEA 2000 network — despite what you may have read on Panbo! — because no Class A truly supported N2K until the AMEC Camino 701 came along (and it’s not perfect yet)… 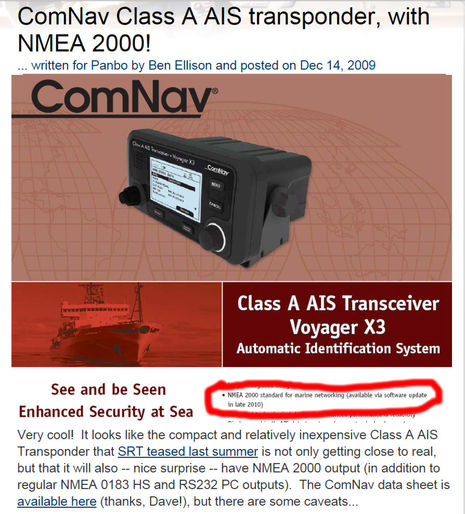 Indeed, I enthused about a new ComNav Class A with NMEA 2000 back in 2009, but apparently the N2K support never happened, which I didn’t realize until last fall when Panbo commenter Howard T. brought up the issue on that old ComNav entry. It turned out that none of these SRT-built Class A transponders — whether sold as the Em-Trak AIS A100, the Comar CSA 300, the Digital Yacht CLAS1000, or the True Heading Carbon Pro — ever got their N2K port activated, though all have stopped advertising the feature (while ComNav surprisingly still distributes the same erroneous Voyager X3 brochure).

While it’s true that most commercial vessels don’t give a hoot about NMEA 2000 because they don’t use it, AIS Class A (or B) is also a great example of how much N2K can simplify and improve an installation. Howard ended up getting a great deal on a used (though bulky) Furuno FA-150 Class A, but the install documented here involved many more components as well as “a lot of reading, a bunch of questions on the Furuno support forum, a few local experts and a lot of cables and itty bitty terminations.” And the complexities seem somewhat similar with this Comar Class A installation on the Nordhavn 60 Tanglewood. Both skippers seem pleased to have Class A now, but I suspect that they’d have simpler, more compact and less expensive installs if they’d tried the AMEC 701. 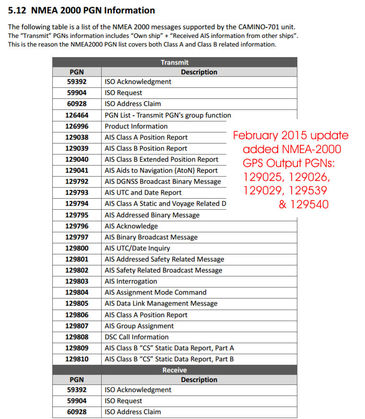 There seem to be four important aspects to getting the N2K interface completely right on an AIS transponder. To guarantee network compatability, the device should be NMEA 2000 certified, which AMEC (Alltek Marine Electronics Corp) earned for the 701 and its Camino-108 Class B in late 2013. But neither N2K certification nor the AIS type approvals guarantee that all the possible AIS PGNs will be output, as we once saw in some Class B devices that failed to output other Class B static data (now fixed) and more recently with AIS AtoNs (at least Garmin needs to update their AIS devices). The PGN list above from AMEC’s well written and illustrated 701 manual looks complete.

Then there’s the fact that an AIS transponder can output complete GPS data over NMEA 2000, even though there’s not enough bandwidth to do so over the conventional NMEA 0183 High Speed AIS output (which is also called IEC 61162-2). Again, this feature is not mandated by any standard, but it’s nice for a boater to get at least a backup GPS along with their new N2K AIS transponder. Vesper Marine has trailblazed this capability (as well as transponder as gateway/multiplexer) and AMEC added it to the 801 Class B last fall and to the 701 in February.

Finally, any AIS transceiver with a NMEA 2000 port should be able to receive Heading data over it, and every Class B I’ve ever tested has. It’s great, as the same N2K cable that outputs AIS target info (and sometimes GPS) to every display can also input the optional Heading info, which means your boat will plot correctly on other screens even when stopped. AMEC has been a little backwards about this capability, though; they just added PGN 127250 (Vessel Heading) input to the 801 in that same fall firmware update and still don’t support it on the 701. Actually, a Class A can also use PGN 127251 (Rate of Turn), but I think that input would also be easy to add and I’m hopeful that AMEC will do so. (Class A installations on IMO mandated vessels may be required to get Heading and RoT via NMEA 0183, but I understand that voluntary Class A installations will work without either value and aren’t required to have them.) 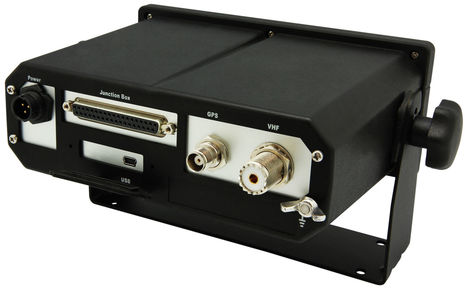 At any rate, aside from the NMEA 2000 Heading issue, the AMEC Camino-701 seems like a nice Class A AIS overall and especially so for boats using N2K. It’s just a little odd that you’ll see a (non-functional) N2K port on the back of all the SRT made Class A transceivers but not on the back of the 701. 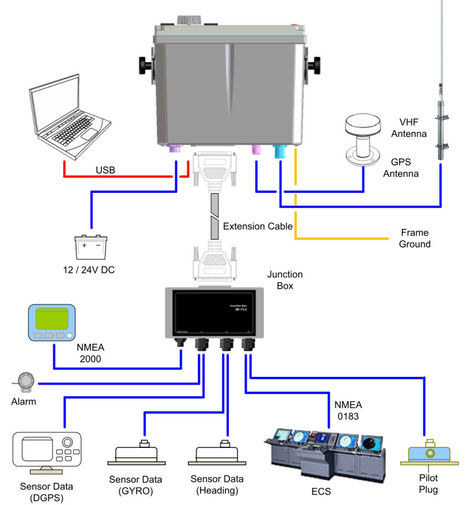 That’s because AMEC put their N2K port on the junction box that also handles all the required Class A inputs, which may not be needed at all given how much the NMEA 2000 interface could do! 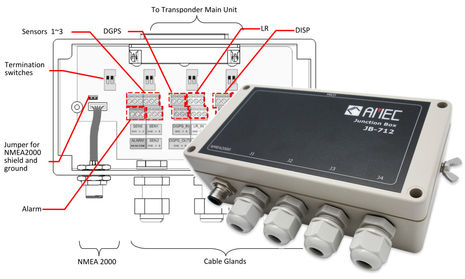 The AMEC 701 junction box does look well designed and there may be use for some of the many possible non-NMEA-2000 connections on some yachts or workboats — like the Long Range (LR) connection I’ll discuss below — but most modern yachts would just use the N2K port, which even includes a built-in switchable backbone terminator. 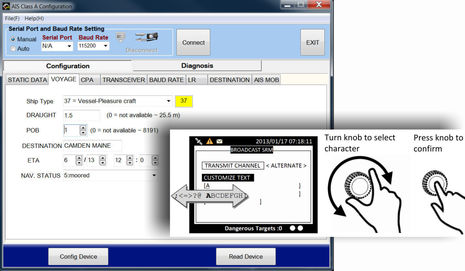 I haven’t tried installing a Camino-701 but I did download the impressive PC configuration software and think it may often be used for more than initial setup or diagnostics. It’s nice that Class A AIS broadcasts Voyage Data that can help other vessels better understand what you’re up to, but it also includes an obligation to keep that data current. While you can enter this information and do most other configuration tasks on the 701 display, it’s a lot easier to type CAMDEN MAINE on a keyboard than scrolling through the letters with a knob. I think that the Voyage Data above reasonably describes Gizmo on her dock in New Bern, NC, though I could certainly get more specific about Destinations and ETAs once I get going. (I do know I won’t be home until mid-June because I’m planning to teach at the new early June TrawlerFest event in Essex, CT.) 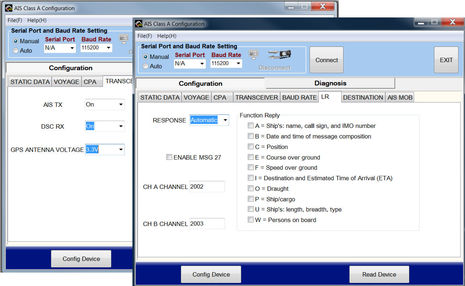 Another feature I noticed in the Configuration software is the ability to set the voltage for the active GPS antenna; the 701 comes with a GPS antenna but the install could be even easier if you can use an existing one. Also, illustrated above is the LR feature I already mentioned and which I’m just learning about. Apparently, you can connect the 701 to a satellite communications system and send off an automated Long Range AIS Broadcast Message, though I don’t know what types of comms systems can handle this and who gets to see your long range tracking. Anyone? 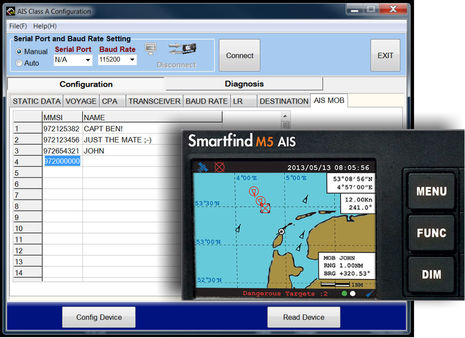 More relevant to many yachts is a table that lets you assign useful names to specific MMSI numbers associated with AIS MoB devices (which don’t support normal static data like boat names). I joked around a bit in my test table, but that inset McMurdo Smartfind M5 Class A AIS — which looks like a rebranded AMEC Camino-701 — illustrates how the feature works with the proper AIS MoB/SART symbol on screen. I don’t know if any other Class A or B devices have this feature, but will note that the Simrad V5035 Class-A AIS also seems to be a rebranded 701.

Though untested by me, I’d say that AMEC has produced a fine Class A AIS, and it may also be the least expensive, at least at Milltech Marine’s $1,999 sale price. Let’s hope that some of the commercial boats recently required by the USCG to carry at least a Class B decide to upgrade to A, and some yachties may be interested, too (though sailors may shy away from the 9W average, 65W peak power usage). Below is a table showing the fairly dramatic dynamic data update differences between A and B. It’s interesting how much we fretted about Class B slowness before we got used to it, but isn’t A still better? 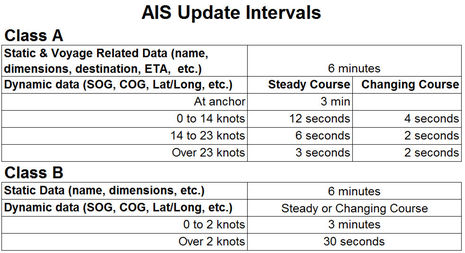