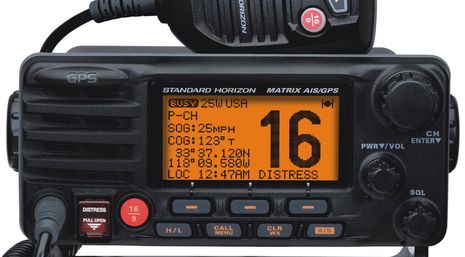 While it looks and works very much like the Matrix AIS GX2100 that caused quite a splash here in 2009, Standard Horizon’s just announced Matrix AIS/GPS GX2200 very usefully includes a built-in 66 channel GPS. And it still has the same $400 MAP (minimum advertised price) as the evolved Matrix AIS+ GX2150, which will now get a $350 MAP. Two years ago Standard introduced the Explorer GX1700 — the first fixed VHF with GPS built in, and still the only one (I think) — and while I haven’t tried one myself, I think that front panel satellite antenna bump works pretty well even when installed under a fiberglass deck or top…

I can’t count the number of times I’ve heard search and rescue professionals lament about how well DSC VHF distress alerts can work but how few boats are set up to send a proper one. All it takes with almost every VHF already installed is an MMSI number programmed in and a GPS connection, but even yours truly is guilty. The first season I had a Matrix AIS 2150 installed on Gizmo I wired in a Simrad AT10 to feed it GPS from the NMEA 2000 network. That worked fine, so I had AIS plotting (backup), direct DSC to AIS target calling, and a functional DSC distress button. But when I moved the Matrix up to the flying bridge before heading south last fall, I never quite got around to the GPS wiring. The Matrix is a very able VHF radio, and the RAM3 Mic I’ve been using at the lower helm also works well, but a bit of laziness meant that Gizmo’s only working DSC distress button was on the otherwise redundant Garmin VHF 200. 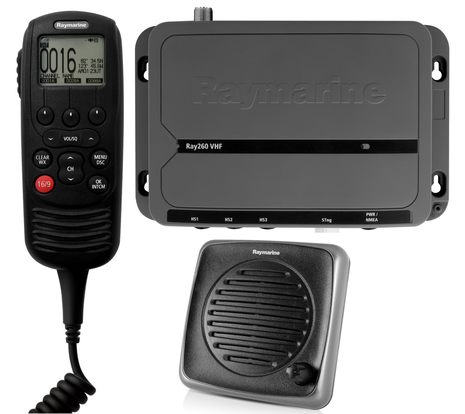 When I first installed the Garmin in 2009, it was the only VHF that could receive GPS over NMEA 2000 and also use that same connection to plot DSC calls and set up AIS target calls (on a Garmin MFD). That didn’t change significantly until the 2012 intro of the Simrad RS35 and Lowrance Link 8, which put both N2K and an AIS receiver into a VHF. Those radios had a rocky entry due to software glitches and still don’t offer AIS target calling, but several recent comments on that same entry were written by satisfied users. I’m hoping that we’ll now also hear from commenters who are using the premium Ray260 modular VHF system, which Raymarine rolled out last summer.
The Ray260 interfaces to GPS and MFDs via SeaTalkNG (aka NMEA 2000) as well as NMEA 0183, and the Ray260 AIS model includes a two channel receiver. There’s no AIS display on the handset, but obviously this black box system is designed for integration with Raymarine screens. I think the remote speakers even match the size and trim of the i70 instruments and pilot heads. Again I don’t see AIS target calling from an MFD, which seems like an oversight (that could be fixed with a software update), but I like that the Ray260 can simultaneously track up to 5 vessels via DSC and can also record 90 seconds of VHF audio you might have missed.
Has anyone out there tried a Ray260? Also of interest would be experience with the
Standard Horizon GX1700, which likely has the same GPS performance as the Matrix GX2200 coming out in January. 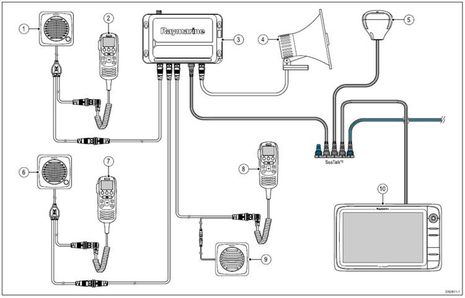 PS: Thanks to commenter Carsten, I just happily read about the new Icom IC-M506 AIS VHF, which seems to combine just about every feature discussed in this entry, including a NMEA 2000 interface, direct AIS target calling, and even 2 minutes of audio playback. Bear in mind that there is no pricing or ship date yet, and the info is only at Icom UK, but here’s hoping that Icom America is planning a nice early 2014 surprise. 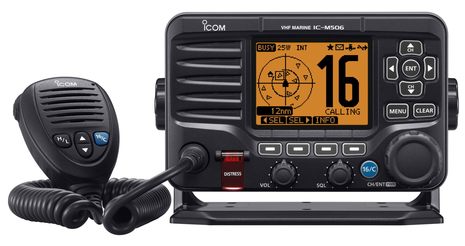