The quest for the perfect boat, month 14 As well as our Carver Voyager 570 has served us, we know it’s not the right boat as we look to cruise further afield

Like many boaters, I’m always on the lookout for the right next boat.  Since joining Panbo I’ve written somewhat frequently about my recently completed trip around America’s Great Loop.  That trip provided my family and me with an amazing adventure as well as the opportunity to think about what makes the right boat for us.

We currently own a 2003 Carver Voyager 570 named Have Another Day.  We bought Have Another Day with no plans for extensive travel and extended time living onboard.  It was a logical next boat for us in our Lake Michigan boating career.  Then, the opportunity came to step away from our traditional lives of work and school to travel.  We debated selling Have Another Day and buying something more blue-water capable, but after considering the route the Great Loop takes we decided the boat we had was fine (if a little big).  Have Another Day completed the Loop very well: she was extremely comfortable for all four of us and our frequent guests, she was reliable, and with the addition of the Seakeeper  and the ability to run at 9kts, she was pretty darn fuel efficient for a nearly 60′ 60,000 pound boat.

As those who have read my blog may already know, my propeller budget was stretched on our trip.  Our boat draws right around 5′ with the propellers extending a full 20 inches below the next lowest part of the boat.  There’s no keel on the boat and the next deepest portion of the boat is very far aft.  All this adds up to little margin for error in shallow waters.  Any incident is likely to end with a haulout or a diver and a prop-shop.  So, the first requirement for our next boat is a keel that extends lower than the props.  It doesn’t have to have skegs below the props, though I certainly wouldn’t turn that configuration down.

We have aspirations of cruising much further south into the islands than the Abacos chain of the Bahamas we visited last year.  My eventual aspirations include making our way all the way down the Caribbean, to South America and  through the Panama Canal.  On the west coast I’d love to explore Costa Rica, the Baja Peninsula, the Pacific Northwest and Alaska.  Our next boat will be selected with an eye towards that cruising.

Because we travel as a family of four and like to be able to accommodate guests we have some minimum accommodation needs.  Here’s a list of some of the requirements we’ve come up with:

We’ve looked at a LOT of boats.  We got very close to a deal on a mid-2000s DeFever 56′ that we really liked but turned out to have an engine package poorly matched for the hull resulting in pretty poor fuel economy.  We’ve looked very hard at Grand Alaskans (also an Art DeFever design) and gotten close to a deal on a 65′ flushdeck.  We ultimately decided that boat is a little larger than we really want to take on (more issues of overall size than LOA) but still think that the 64 raised pilothouse Grand Alaskans are a good fit for us. 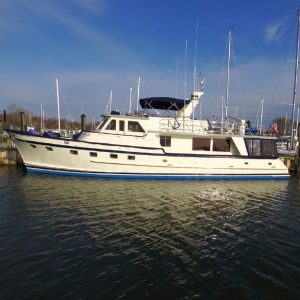 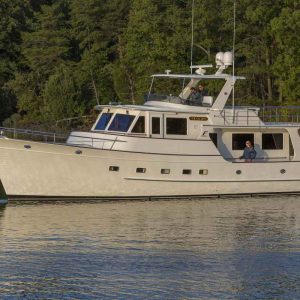 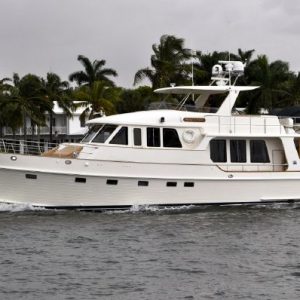 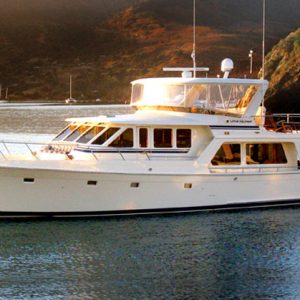 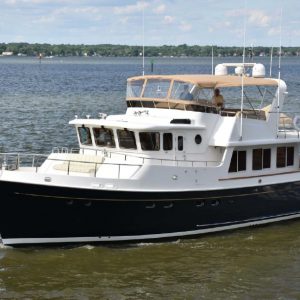 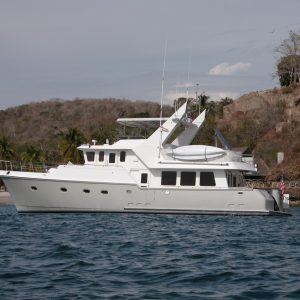 Our long list of boats we’ve considered includes Fleming 55s (a little too small), Fleming 58 (perfect size, can I borrow a few million?), Fleming 65s (great boat, big price tag), Offshores (most don’t have a Portuguese bridge and come at a very high price point), Selenes (still in consideration, on the slower end but doable), Nordhavns (amazing boats, might be overkill for our needs, draft a concern), Grand Banks Aleutians (amazing boats, might be out of our price range), Outer Reef (another price point challenge) and probably many others I’m forgetting.

We’ve looked at some boats pretty far afield of the mainstream like Florida Bay Coasters, Real Ships and Great Harbour but haven’t yet found something that checks all the boxes for us in that direction either.

I believe it’s likely the collective wisdom and experience of this group of boaters is likely to be far exceed my own.  So, please, tell me what you think I should be looking at.  Am I on the right track?  Am I missing something?  Ruling out a class of boats I should be considering?  I’d love to hear from all of you.