The state of marine Ethernet connectors, and hello to RayNet

It’s not an exciting photograph, I know, but cables are a fairly big deal when you or your installer get down to the real nitty-gritty of putting a marine electronics system together. While it’s great that the NMEA 2000 cable and connector standard is pretty much taking care of lower speed sensor networks regardless of equipment brands, the sore spot now is the Ethernet cables used for high speed data like radar, sonar, IP cameras, and chart sharing. Though standard Ethernet cables easily connect many different devices in our homes and offices, marine connectors are not standardized. In fact, some Raymarine customers are dealing with two proprietary Ethernet connector designs as the company transitions to the RayNet plugs seen above. But RayNet makes sense to me and shouldn’t cause undue pain once all the available options are understood… 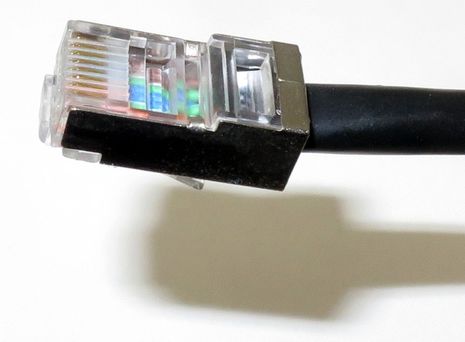 The basic problem is the otherwise ubiquitous Ethernet RJ45 connector. Your house probably has at least a few cables double-ended with male RJ45 connectors like the one above and snapped into network ports on computers, routers, printers, televisions, etc. The plug can snake through a hole about 13mm (1/2″) in diameter, and I’m told that an installer handy with a RJ45 crimping tool can fairly easily run plain cable. In short, the RJ45 generally works fine indoors (regardless of device brand). However, it is not rugged enough to go on the back of a marine multifunction display, let alone a radar, because it’s not at all waterproof and it doesn’t take much of a tug to overcome the little plastic locking mechanism. 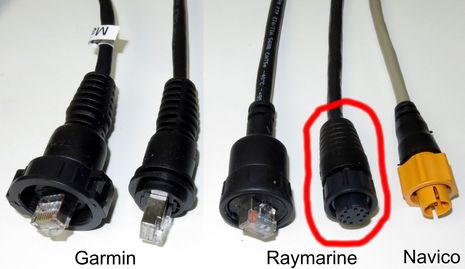 While the NMEA is slowly selecting a waterproof marine Ethernet connector standard as part of ongoing OneNet development (which, like NMEA 2000 connectors, will be an existing industrial standard offered by multiple manufacturers), the major brands have already each come up with their own way of doing boat Ethernet. The photo above shows how some are simply RJ45 plugs with a collar system that keeps water out and makes the mechanical connection strong. The first two are the same Garmin Marine Network style, meant to show how the snap-on collar leaves the connector an installer needs to snake through a boat only 24mm (15/16″) in diameter (though Garmin has a neat alternative, discussed below). The middle connector is Raymarine’s old style SeaTalkhs collared RJ45 and then circled in red is the new RayNet connector, which seems designed from the ground up for marine use and thus, has nothing to do with RJ45. Finally there’s Navico’s colorful marine Ethernet plug, also built specifically for the job. Why is Raymarine switching? 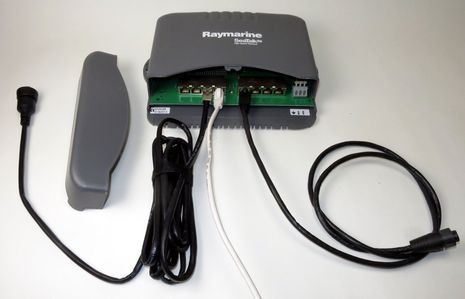 Well, some manufacturers support the concept that RJ45 connectors are good enough to use in dry, protected boat spaces, which is evident in the older Raymarine SeaTalkhs (high speed) switch above. In fact, that very switch has been mounted under Gizmo’s flying bridge helm for several years and has happily accepted the RJ45 plugs that came on the end of a Ray radome cable and the inside ends of the old SThs cables that went to an E-Wide MFD and a blackbox DSM sounder, plus the standard cable used to control FLIR cameras (their Ethernet details here) and the RayNet-to-RJ45 cable that came out with the new plug. The 26mm (1+”) diameter of the old SeaTalkhs waterproof connector really didn’t matter because the installer could fish the RJ45 end (at least tape wrapped for protection) or just whack off the inside plug and crimp on a new one after making the run. 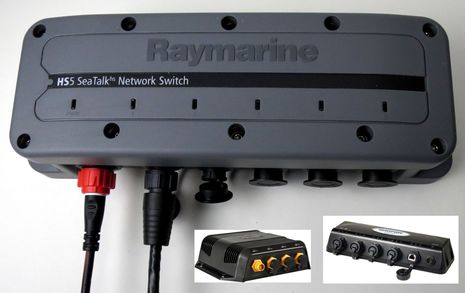 However, as marine Ethernet systems got more sophisticated and also started finding their way aboard smaller, less protected boats, Navico and Garmin both developed Ethernet switches that use their waterproof connectors, the Navico NEP-2 and the Garmin GMS 10. So, now Raymarine offers the HS5 SeaTalkhs Network Switch, which also costs about $250. But when you start running cables with waterproof connectors at both ends, their diameter really matters, and that’s one reason the new RayNet plug is the slightly skinnier winner at about 18mm (11/16″) with Navico second at 20mm (13/16″). Then again, none of these connectors is skinny enough in certain situations, radar cables fished through sailboat masts being the most common. 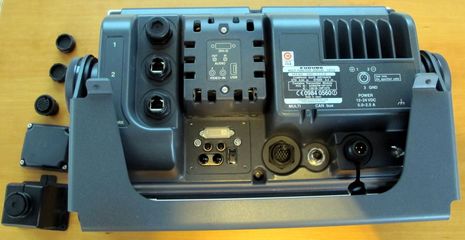 Before discussing Ethernet cable splicing strategies, let’s look at the heavy-duty backside of a Furuno NavNet TZT14. I didn’t have a Furuno Waterproof LAN cable to pose with the others (it’s still installed on Gizmo), but obviously, Furuno uses the collared RJ45 approach. The inside end is standard RJ45, as is their HUB101 switch. As noted, similar Raymarine Ethernet architecture worked fine on my boat, and having RJ45 inside also means you can probably use a regular (and much less expensive) Ethernet switch. Furuno seems particularly open to that option, and I’ve used a nice little 12v NetGear GS105 with both NavNet 3D and TZT. Note, though, that the TZT14 has its own 3 port Ethernet hub. It’s become common now for larger MFDs to have multiple Ethernet ports, and it often means that a separate switch is not necessary. However, on a boat with two helm stations, having a switch may mean you can run radar, sonar, etc. at either helm without having an unused MFD turned on.

As for butt splicing typical Cat 5 Ethernet cable, it’s just not done in polite company! It’s the same problem as fine gauge NMEA 0183 wires except with four twisted pairs of 22-24 gauge solid core wire. You don’t crimp connect them individually and you don’t use a terminal block. The accepted way to join two Ethernet cables is by putting a male RJ45 connector on each end and snapping them both into a female-female coupler. It used to be that if you wanted to connect a Raymarine radar directly to, say, an E-Wide MFD, you used the Crossover Coupler seen in two pieces above (I won’t get into what “crossover” means in Ethernet wiring, largely because current gear doesn’t care). You can use the same coupler with RayNet/RJ45 cables — like the one seen at the top of the entry — but I like the new A80247 Adaptor shown going together above. 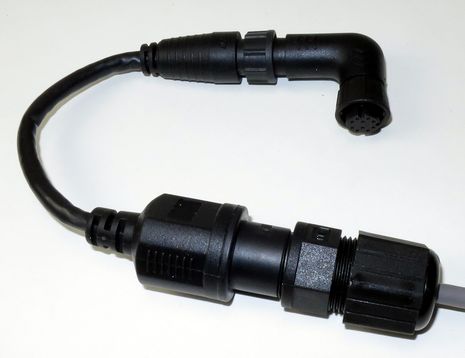 Here’s what the waterproof adaptor looks like when screwed together and further accessorized with the new RayNet Right Angle Adaptor, which also doesn’t seem to have reached online stores yet, but can be seen on this Raymarine page. There’s also old SThs connector to RayNet adapters, a RayNet to RayNet Cable Joiner, and even a neat RayNet Cable Puller, which both provides the right place to tie a string and protects the connector pin holes as it travels through your boat’s mast or raceway. Conclusion? RayNet looks like a better marine Ethernet connector than its predecessor, and I don’t think the installer who called me last week after finding himself dealing with both types of SThs connectors on the same new install will feel so frustrated when he sees all the available adaptors. 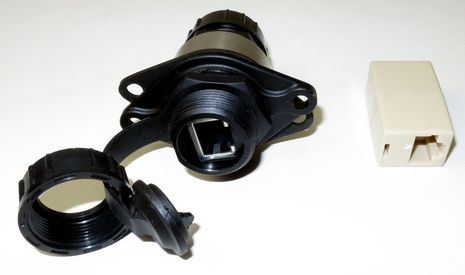 Actually, that particular installer and many others often turn to Garmin Marine Network parts to solve Ethernet cabling issues even when they don’t involve Garmin gear. That’s because they can buy Garmin waterproof RJ45 plugs they can crimp themselves, plus the Coupler pictured above, which can even be bulkhead mounted (perhaps near your mast step). All of this marine Ethernet gear is fairly expensive, by the way, and the new RayNet cables look especially so. By contrast, that standard RJ45 coupler above costs 56 cents and is doing the job on some boats (possibly wrapped in tape). On the other hand, many boaters don’t want to go cheap on their high speed data networks and some advanced Ethernet capabilities are just coming to marine electronics. The Raymarine gS Series, for instance, uses Power over Ethernet (PoE) to simplify installation of the RMK keypad and IP cameras to come (as I described here).

In fact, if you look closely at the RayNet plug you’ll see that it has 10 pins, which is a minor mystery given the Ethernet norm of 8 wires. Does anyone have a guess about what those two extra pins do, or will eventually do?

Finally, I’d like to close with a shot of Raymarine’s A06046 N2K (DeviceNet) Male Adaptor Cable, hoping to avert a negative reaction to my opening remark about how NMEA 2000 connectors and cabling have become the lower speed data standard across brands. Ray likes its SeaTalkNG connectors and cabling — and it does have merits, like a color-coded backbone and heavier gauge power wires — but the cable below will put any current Raymarine device on a standard N2K network where it’s going to share data with other brand gear. Or you can use the A06045 Female Adaptor Cable to go the other way. But even if you used the Ethernet adaptors and tools discussed above to connect, say, a Navico MFD with a Garmin radar, they will not talk to each other. That level of data sharing probably won’t even happen when OneNet is finished, but it might be good to at least have a standard Ethernet cable and connector system. 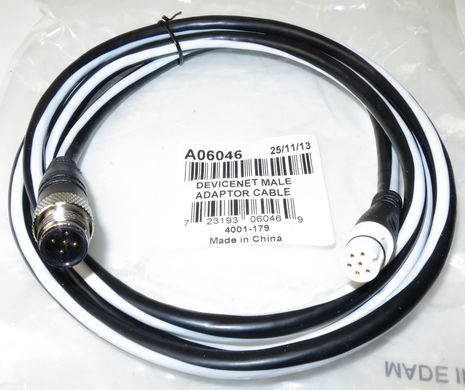