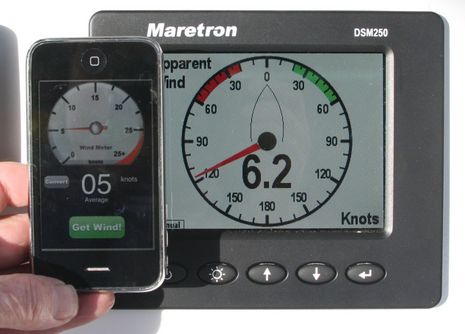 iPhone folks will notice that the one I’m holding above is upside down.  That’s because the Wind Meter app shown uses the sound of wind passing over the iPhone’s microphone to measure its speed.  And — would you believe it? — it actually works.  I was out testing and photographing the NMEA 2000 wind rig early this morning and thus could compare Wind Meter to a consensus of five high quality sensors mounted just a few feet over my head.  No, it’s not as accurate or responsive as they are (especially flaky under 3 knots or so), and it apparently can’t handle speeds over about 25 knots, but still…

I saw Wind Meter measure 4 to 12 knots better than I can guesstimate it, the app only costs 99 cents, and — once you’re set up with an iPhone and iTunes — it’s as easy to buy as a candy bar off that rack next to the check-out line.  And there are so many people buying apps that the California kite surfer who dreamed it up might make some money.  Now I don’t think Wind Meter is particularly valuable to boaters — though the first iPhone-owning one I mentioned it to bought it while we were on the phone! — but I don’t think the iPhone phenomenon can be ignored.
Heck, I was talking with a friend downtown yesterday and a guy he knows came along and immediately pulled out his iPhone to show off iNavX.  “Look…it downloads NOAA charts…look, you can zoom in by pulling two fingers together across the screen…etc. etc!”  And he’d just updated the phone to 3.0 software, as I did yesterday to both the iPhone and Touch I’ve been using lately.  It was totally painless, and, though some of millions who tried got frustrated, my beanie is doffed in Apple’s direction.
I was particularly interested to see what the Touch’s new Bluetooth facilities could do. Touch + stereo headset + keyboard + GPS would be one sweet little Personal Area Network (or PAN, which, combined with BOat, may be how PANBO got named). Well, as expected, my Motorola S9 headset works great, in fact it seems to sound even better than it did via the Sony Sony BT dongle

I got last Fall.  But neither the i-Blue GPS nor the Think Outside Stowaway keyboard

were recognized by either the Touch or the phone.  Drat.  There seems to be confusion about exactly how Apple is handling bluetooth, and devices may have to be Apple approved, but the developer pages certainly suggest that many accessories will be supported.  Consider me, iBen, to be in waiting, hoping, and willing-to-beta-test mode. 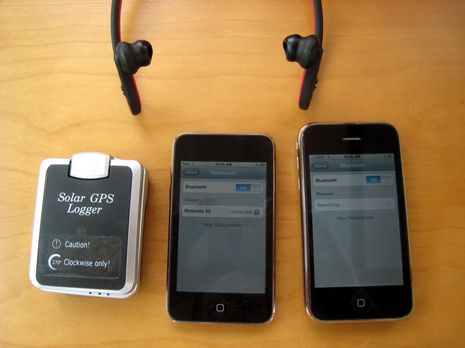