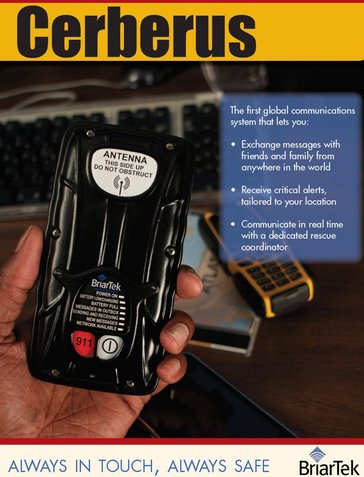 Yes indeed, if you’re already wowed about how Globalstar’s new SPOT Connect might help you communicate when you wander beyond cellular, you’ll likely mumble multiple wows once you understand the abilities of the somewhat similar Iridium-powered Cerberus system.  Click on that brochure cover above — seen first right here! — and behold the Iridium/GPS/Bluetooth communicator itself, with an apps phone in the background, and the three major features called out.  And you might make that a triple wow as developer BriarTek intends this to be the three-headed guard dog of satellite messaging…

In mythology, you see, Cerberus is the triple headed hound who guards the gates of Hell.  I was a little taken aback when I googled this prior to speaking with BriarTek’s Joe Landa a few weeks ago, but he explained that their customers often do “go to Hell and back.”  While you may recall his company from a Panbo entry about its ORCAdsc MOB alarm, poking around the BriarTek site suggests that its history is largely about providing safety gear to the military.  Cerberus is definitely designed for military and commercial users, but Landa made it clear that BriarTek foresees a lot of other users — like, in the words of his brochure,  “All serious boaters. All dedicated hikers. All travelers to exotic locations.”
At any rate, Cerberus does have three components, as suggested by the overall system name, and laid out in the slide below.  Cerberlink is what they’re calling the hardware part, which contains the much anticipated Iridium 9602 SBD modem along with GPS, memory for saving received messages, and lots of battery capacity (more detail way below).  Like Spot Connect, the messenger has a dedicated distress button, though most functions are controlled by an apps phone or tablet.  I haven’t seen screens of what BriarTek is calling Cerbertouch — which will be available for the usual Android, Apple, and Blackberry subjects, as well as the unusual Sonim ruggedized phones — but I suspect it will be much like the Connect app seen in the last entry.  Except, of course, that Cerberlink and Cerbertouch can receive messages as well as send them, anywhere, which are HUGE… 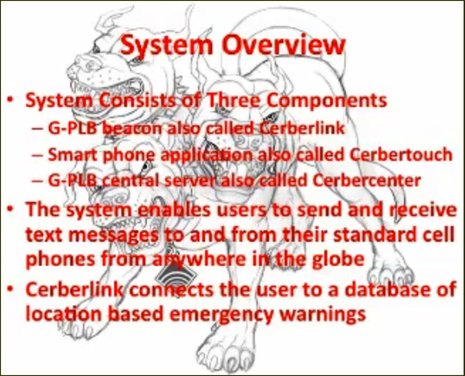 If you’re in a car accident the worst of it is apt to happen in the first seconds and help will likely be on scene quickly, but a boating disaster — in fact, any problem out in the wilderness — tends to unfold over a relatively long period of time.  In many of the cases I’ve read or heard about, relatively easy two way communications between the boat and the rescue folks would have been tremendously valuable.  Sometimes this already happens thanks to satellite phones or VHF, but I actually think that texting might be better as it’s slightly asynchronous.  That is to say, you could be working on the problem while just casting a occasional glance at the Cerberlink LEDs to see if the SAR center had something to tell you.  (And, mind you, there are several cases that will make an apps phone quite waterproof, like the Dry Case).
Now two way rescue messaging is a brand new thing, and we no doubt have a lot to learn about it, but my sense is that one day we’ll look back on one-way systems like EPIRBs, PLBs, and SPOT as kind of crude…the cause of too many unnecessary SAR operations, and too much anxiety about whether a rescue was in the works.  I’m not saying that Cerberus will replace EPIRBs rapidly — for one thing, the Cerberlink is not really designed to work in the water — but it’s surely a lot closer than SPOT, and will be very tempting because of its other features.
A lot of boaters, of course, are going to love the concept of two way texting when beyond cellular, especially using the contact list and familiar keyboard on their own phone.  But BriarTek has a much bigger vision of what Cerberus can do for you.  The central server, called Cerbercenter, can track where your Cerberlink is and deliver warnings on critical local weather or other matters of importance.  In other words, Cerberus is designed to be a proactive safety system.  You can also have Cerberserver send those messages direct to your phone if it’s available, and you can even add custom news or stock alerts to that feed.  It could be your 24/7 safety, info, and communications tool.
So I don’t think BriarTek is exaggerating when they conceive of Cerberus as the three-headed guard hound of satellite messaging.  Do you?  And fortunately you don’t have to rely on this entry to understand the system.  Cerberus won’t be officially launched for a few weeks, but I just discovered that BriarTek recently put up an informative video about it.  You can learn, for instance, that there is a fixed Cerberlink in development that can handle sensor inputs, kind of like Spot Hug, but two-way and truly global.  Pricing is not firmed up yet, and rentals will be offered first, but Cerberus will be more expensive than Connect, understandably I think, though I got the impression that it won’t be silly high.  Besides, one of the good things about the Iridium model is that dozens of developers are working on 9602 SBD products and so we may well see other Cerberus-like offerings soon.  There’s also an argument that the new Inmarsat iSatphone Pro can do a lot of what Cerberus does, especially with a dock.  It may get confusing, but it’s all good, I think. 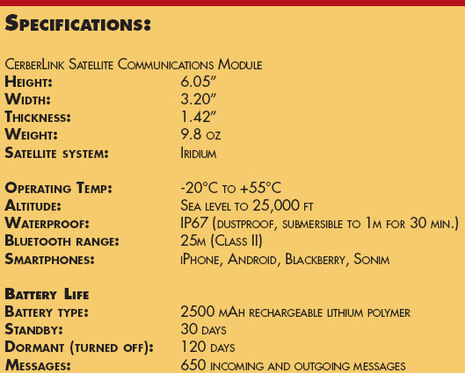