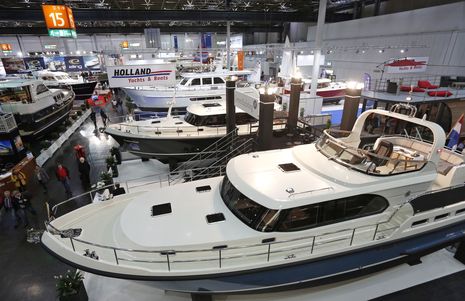 boot Düsseldorf is the world’s largest boat fair with a very long tradition and in case you wondered, it really is about boats, not shoes. It is held in Düsseldorf on the banks of the river Rhine in a huge area with 17 halls, and because of its central location in Germany and Europe, it draws many foreign visitors, such as from nearby Netherlands and also — they say — some wealthy Russians…

boot Düsseldorf is unique in that it has no in-water area and yet shows yachts of up to 50 tons which are brought into the halls via Big Willy, a travel lift that only gets a few weeks of use each year. It can extend two legs to crawl sideways into the river Rhine, where the boats must power into a 2 knot current until Willy lifts them free.  By covering all water activities including diving, beach sports, paddling and angling and by offering a wealth of family entertainment, this fair has managed to retain visitors even in the current economic climate. But this entertainment park character “dilutes” the visiting public so this fair is kind of the opposite of METS (covered on Panbo by Kees).
The following is what I have noticed in the area of marine electronics: 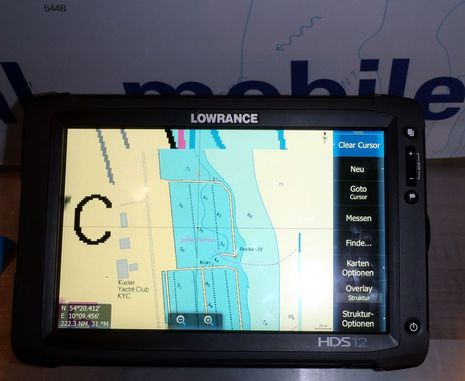 NV charts
The big news is that they are about to offer a new Chart Navigator 5 software based no longer on Coastal Explorer but on Fugawi Marine ENC which, under contract from NV, has received many modifications. The new functions will eventually appear in the normal Fugawi product. Previously, NV charts was selling version 1.1.63 of the re-badged Coastal Explorer so an upgrade or replacement was overdue. My personal impression is that both NV and Rose Point are owned/directed by individuals with rather strong egos and there may have been a clash here and there. Note that this does not affect existing full support of NV charts by Coastal Explorer. I use this personally and see no reason to change.
When Chart Navigator 5 (aka Fugawi) is ready — supposedly this season — it will be supplied as light version with all “Combi Packs” (paper + digital). The new version has NGT-1 support, seamless chart quilting and a long list of other improvements such as Win 8 multitouch support, Google Earth integration and the like. In addition NV will offer an “app” to be available for iOS, Android and “Windows” (I have asked but don’t know yet if that means Windows Phone 7 or a Windows desktop OS) free of charge that also handles the chart activation process.
Official pricing for Navico plotter charts on SD cards — already discussed on Panbo — was published at EUR 198 per area, the same price as in USD but the EUR price includes VAT, which, though I could go on for hours about the difference, is more or less the same as sales tax. I played with a HDS12 Touch on display and found the NV charts to work nicely and nearly as well as in CE, e.g. quilting includes harbor/marina plans. The picture above shows my former marina slip. 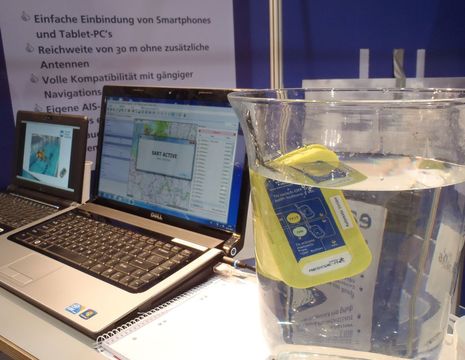 Weatherdock
They showed an AIS SART live test with a water activated unit. The device and the receiver were rigged with a changed frequency so as to not confuse shipping on the Rhine river. You could drop the unit into a bowl of water and see the lights come on. After a 5 sec. wait, the unit activates which instantly brought up the warning message “AIS SART ACTIVE” seen in the photo.
Weatherdock is now offering most or all of their receivers and class B receivers/senders with NMEA2000 output using standard DeviceNet connectors. For existing units, they offer a converter that does not seem to be an Actisense NGW-1 or other unit that I recognize and so may be a product of their own engineering. I have asked for details of the NMEA2000 output of the units with native NMEA2000 support and the converter but don’t have an answer yet. If I get it, I will put it in the comments.
None of these devices are NMEA 2000 certified. They have purchased the Standard but aren’t willing to bite the bullet for certification, which is understandable given their many products, I think. 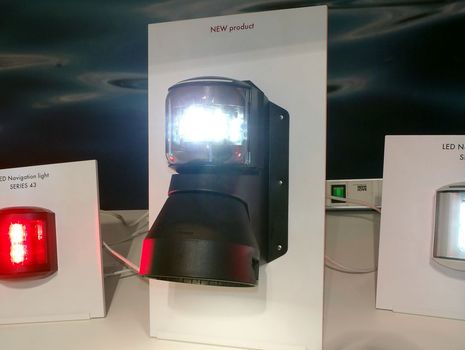 Aqua Signal…
..offers a new mast mount combination LED engine (steaming) light and deck floodlight similar to the product that was available for decades with incandescent light. The plastic base is unchanged from their previous model and so is a drop-in replacement meaning no additional holes in the mast. I was allowed to take the picture only after swearing I was not a Chinese copycat. 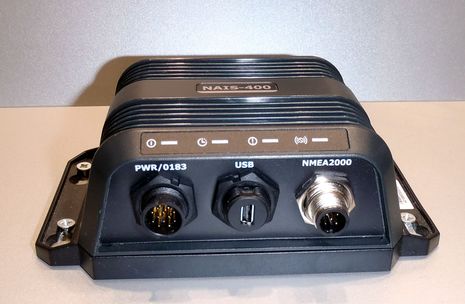 Navico
The NAIS-400 looks very small and very nice. I’d go for it if my shopping list wasn’t already a mile long (also, the Weatherdock offers the same in a larger box, see above). I heard rumors that the classic B&G analog instruments will be available this Fall in a NMEA 2000 version. The Simrad RS35 VHF — Panbo entry here — was on display and I complained that the wireless unit’s battery would not last very long with the speaker chatting away all day. On this I was told that the cradle has induction charging so power is constantly supplied to the handset when in the cradle. So I take back my complaint. 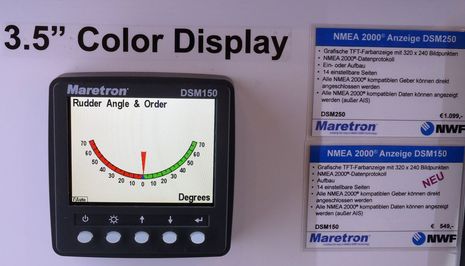 Maretron
The DSM150 is tiny! It would probably fall through the hole left by one of my B&G T41s if I wanted to replace. So Maretron now has put a product way too small next to their product way too large. To compensate? They also have a water-in-fuel-indicator that I didn’t know existed. 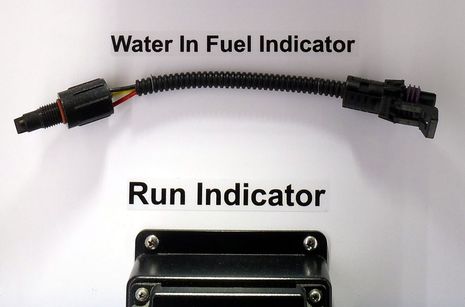 Scanstrut
Offers a new through-bulkhead-seal for multiple cables and a new waterproof junction box. They were also peddling their branded version of the iPad case but I don’t believe in that product’s integrity and I bet their warranty goes into excruciating detail about how any damage to the iPad is not covered under any imaginable circumstances. This is probably a problem of any low-priced piece-of-rubber-product that is supposed to protect something worth much more. The solution? Easy… just make the rubber-thingy as expensive as the iPad itself and you’re all set. This is what some Berliners have done as the Flowgistics Flowtouch (not shown at the boot fair I think, I saw it elsewhere). That one I would spend on.
Personal note: I have an old aluminum mast-mount radar bracket from Scanstrut that I took off my mast last winter because it is corroded almost beyond recognition. Even when it sits unmoved on a shelf in my basement it steadily deposits white stuff on its surroundings. One day I will slam this thing down on the counter of some Scanstrut booth on some boat show, making everyone cough from the white dust, and demand an explanation! I wonder if the term “AlMg4,5Mn” means anything to them — or rather, I hope so because, for some reason I don’t expect you to understand, I went right ahead and bought another one of their radar brackets, this time a self-leveling one.

WamBlee
They offer a personal AIS SART rescue device W420 which uses a pencil-thick silicone tube as antenna. I have no idea how that works. The tube is either empty or filled with a transparent liquid. They also have an “AIS SART sniffer” W440. It’s sort of an intelligent relay that reads NMEA0183 VDM/VDO messages and closes or opens when “AIS SART ACTIVE” message is received. They point out that this can be more than just an alarm. The relay could be rigged to make an autopilot tack or gybe the boat if the single handed crew is overboard. My Simrad AC12 computer doesn’t have a terminal for this, though.
And on this topic I heard a story about how Bernhard Stamm, current Vendee globe competitor, had an unpleasant experience with his autopilot remote that was rigged to tack/gybe the boat when the remote is separated by more than 20 meters from the control unit. He forgot to leave the remote on deck when he went up his 29 meter high mast… Having twice had the experience of going up the mast underway, in benign conditions, I am sure I don’t want to be clinging to the mast of a broached sailboat heeling over 60 degrees in ocean swell and no one around for hundreds of miles!

Furuno Germany
They are not aware that they are the only ones offering Furuno PC radar (see recent entry by Kees). They are also not aware of any restrictions to selling it anywhere in the world — as always via dealers, not directly to end users. If you are interested in this product, I invite you to have a look at Furuno Germany’s dealer list because I have never liked marketing departments trying to set up national barriers. This is outdated and outmoded in times of the internet. I can personally vouch for the dealer listed in Hamburg or if you want an online source, you might check out the Busse Yachtshop; they have a good selection of Furuno gear and I have bought from them and even visited their office.
The PC radar is limited to the DRS2D and DRS4D radomes. Open array scanners are not supported. I don’t know if this was determined by management decision or for technical reasons.

Henning Dürr is a freelance IT consultant and sails a 1998 Jeanneau SO 45 in the Baltic. This year might bring a change of scene, though. New Year’s Eve might see him, his family and boat in the Caribbean. His opinions are of course completely his own 😉