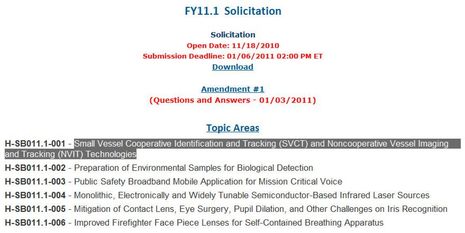 It’s amazing how the whole boating community can apparently miss information of great interest even though it’s in plain sight. Remember how we argued about possible Department of Homeland Security AIS mandates last March? Well, had anyone poked around the DHS’s interesting Small Business Innovation Research (SBIR) Program, we would have known that the government had already expressed a desire to get the small vessel tracking job done in a much more passive manner, even with benefits to us boaters!…

In November, 2010, the SBIR published a Solicitation for grant proposals on the following topic: “Small Vessel Cooperative Identification and Tracking (SVCT) and Noncooperative Vessel Imaging and Tracking (NVIT) Technologies.” The web page seen above still exists and you can download the whole Solicitation document there.
The strong inference of SVCT and NVIT is that DHS plans a two prong approach to monitoring small vessels, Cooperative and Noncooperative. And note that they define small vessels as everything under 300 gross tons, as larger vessels are already “tagged with” AIS. But note too that Class B AIS isn’t even mentioned in the topic details. This fits with what I reported on that AIS vs “liberty” thread last year; Homeland Security never saw AIS as a viable mandated small vessel tracking system, though they are anxious to sort out boats better than they can now. You can learn about the thinking on this over the years at DHS’s Small Vessel Security site, which is where I found the (bad) scenario worksheet below. There are so many ways bad guys could use boats to do harm! 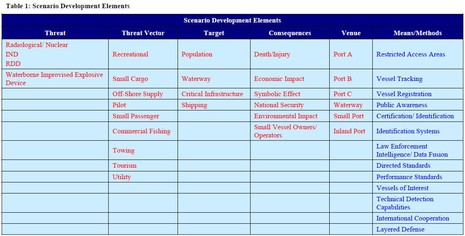 At any rate, I’ve learned a lot about what happened with the SBIR solicitation. An unusually large group of forty-two companies submitted applications for a Phase I grant and three were selected. That means they got financing to refine their ideas and submit them to a team of “subject matter experts” and other DHS personnel. In fact I spent almost two hours on the phone this morning with a retired USCG SAR and security operations expert who was intimately involved in this process and he impressed the heck out of me with his technical knowledge and “out of the box” thinking.
Two of those Phase I award winners only offered NVIT (noncooperative vessel) solutions and folks who don’t like the idea of DHS tracking their boat may be pleased to know that neither was chosen for a Phase II grant. Essentially DHS does not see a passive low cost vessel tracking technology in sight yet. But that’s not to say that they aren’t already using high end NVIT in particularly vulnerable harbors. And anyone upset about recreational boat tracking really ought to look first at what other branches of government are up to, like the new two billion dollar NSA data center profiled in Wired. Does tracking your boat matter if NSA is already collecting all your data anyway, maybe even encrypted accounts?

What is truly interesting, I think, is the single SBIR idea that’s been selected for Phase II, which essentially means an extensive public beta test. It’s not time to detail it yet, but I can tell you that it’s a pure SVCT solution, with emphasis on cooperation. And I certainly hope to discuss it soon because I think it might be a real boating game changer. What could it be?
A lot of you have technical knowledge and innovative juice and you can download the details of the SVCT solicitation just like the winning company did back in late 2010. What’s your idea for a cooperative tracking technology which incorporates “one or more of the following capabilities” (the bold facing is mine)?