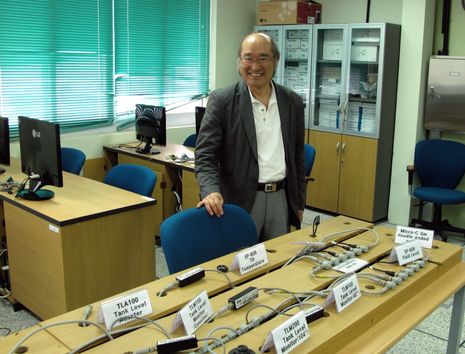 I so appreciated getting to know Dr. Yung Ho Yu — known around the world simply as Dr. Yung — at the Korea Maritime University in Busan, and I think you will too once you realize how much he and his programs are doing to advance marine electronics and improve the standards that make them inter-operable. For starters, take a close look at the NMEA 2000 teaching lab surrounding the good Doctor. The twenty work stations are all gatewayed to an extensive N2K sensor network so that students can experience and even interact with the protocol right down to the bit level as the instructor demonstrates from his work station. I’d like to be wrong, but I doubt that there’s a similarly powerful teaching and research tool anywhere else on the planet…

Before going into more detail about Dr. Yung’s programs, let’s look at the environment he works in. Korea Maritime University (KMU) entirely occupies a lovely island at the mouth of Busan’s main harbor (except for the military and vessel traffic service facility perched on top of its sharp peak). If you wander around the Google Map above you’ll see that the Busan area is full of commercial shipping facilities and over to the southwest on Geoje Island you can also view the Daewoo Shipyard where gCaptain John Konrad recently toured the world’s largest ship, scheduled to launch later this month. You’ll see some of the intriguing coastline — think clear waters, scenic topography, and palm trees mixing with evergreens — that the Korean government intends to develop for cruising by their own people and visitors.

KMU is a major institution with over 3,000 students just in the College of Engineering.  Dr. Yung — who shipped out for enough of his youth to make Chief Engineer — is a Professor in that College’s graduate Department of Control & Instrumentation Engineering where he founded the Advanced IT & Ship Convergence Center (acronymed “AITASC” for some reason). He also directs the Korea Marine Electronics Industry Promotion Association (MEIPA), which is managed by Dr. Soo-jong Mo (purple shirt) from the same offices used by AITASC. In Korea, industry and academia, and the government, seem to work together more closely than what we’re used to here in the West.
Flanking Dr. Mo, myself, Dr. Yung, and Jim Fullilove in the photo above are two of about a dozen graduate students (and two dozen “company researchers”) working within AITASC. We’re standing outside the NMEA 2000 teaching lab which also serves as a test center for certifying N2K devices to the standard. AITASC has a web site, but I was unable to find the brochure which explains how it was funded in 2008 with 2.4 million dollars mostly contributed by the government’s Ministry of Knowledge Economy but also by 8 tech companies. 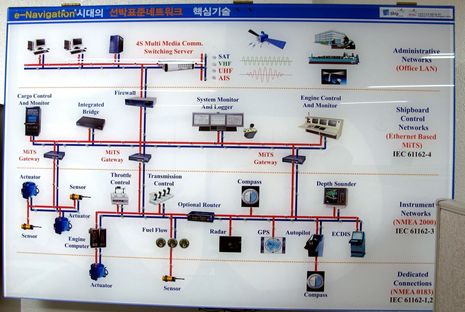 The ambitious goal of AITASC is to be a major R&D center behind e-Navigation — the IMO’s strategy to improve overall navigation, safety, and communications technologies in commercial shipping — by helping to develop both standards and real products. I’ve long heard that NMEA 2000 might eventually make it into the world of shipping, but Dr. Yung seems to have no doubts. In fact, it’s no coincidence that the diagram above, which dominates the AITASC office, strongly resembles the multi-layered network diagrams used to illustrate NMEA’s OneNet initiative.
In fact, Dr. Yung is a member of the OneNet working group and AITASC has volunteered to write the OneNet certification software. The Doctor is also working with the IMO and IEC e-Navigation groups and what you see labeled above on the Ethernet and PC level as MiTS — meaning Maritime Information Technology Standard — may well include OneNet. 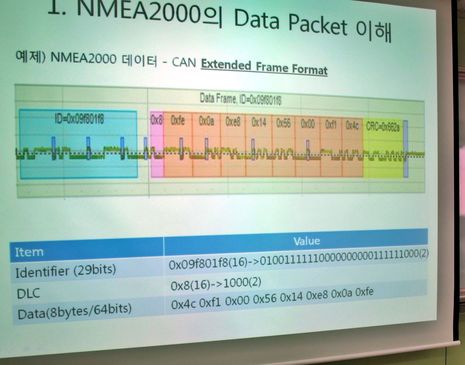 Now, I have no idea what other technologies and/or standards are being contemplated for e-Navigation, MITS, etc and I’m sure that there are many other able parties involved besides NMEA and AITASC. So even if greater commonality between the recreational and commercial marine electronics worlds seems good for all, it may not get very far. It’s undeniable, though, that NMEA 2000 — which sometimes seems rather local to the U.S. and yachting — has gotten the serious attention of a very techy country on the other side of the globe. I gather that hundreds of students have been through Dr. Yung’s teaching lab, ranging from electronics and ship building technicians just getting an overview of N2K to the grad students who may understand everything on that slide above (in two distinctly different languages). 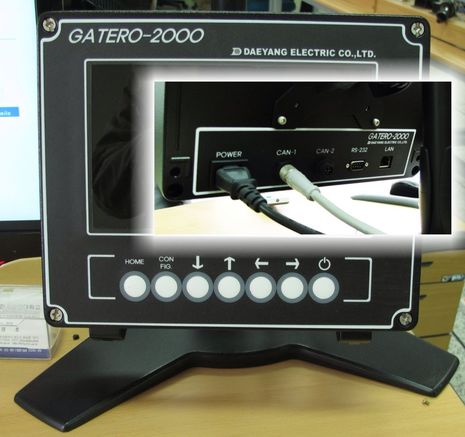 I suspect that the Daeyang Electric Gatero-2000 I spotted in the lab is what NMEA 2000 may look like on a big ship. You wouldn’t want to drop one on your foot. The inset of its backside suggests how it can gateway two N2K (CANbus) networks and an NMEA 0183 stream up to Ethernet. Daeyang is an AITASC sponsor and this device may have been developed in part right in this lab. Doctors Yung and Mo told us how MEIPA hopes to create a small industrial park and fit out a test vessel all to encourage marine electronics startups. 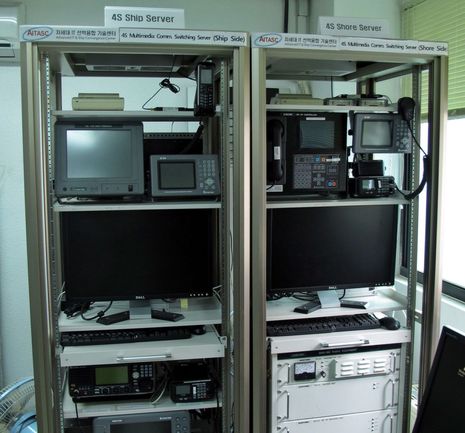 Seen above is equipment that AITASC uses to test and demonstrate the “4S” aspects of e-Navigation, where all the monitoring data collected at the lower levels gets communicated around the ship and to shore. The last picture requires some explanation but may draw a smile. When the whole system is being demonstrated a Maretron DST110 Depth/Speed/Temperature Triducer sits in the top of that tall aquarium and the bubbler is enough to spin the paddlewheel a few knots. That’s a Dr. Yung idea that may make it all the way back around the world to the Panbo lab. 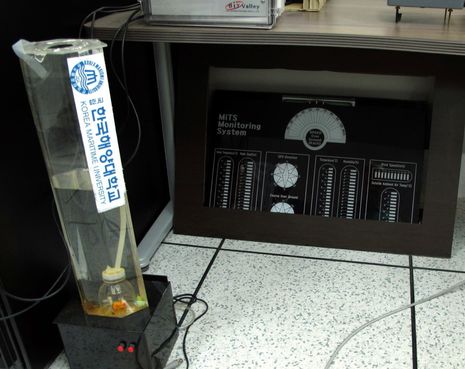