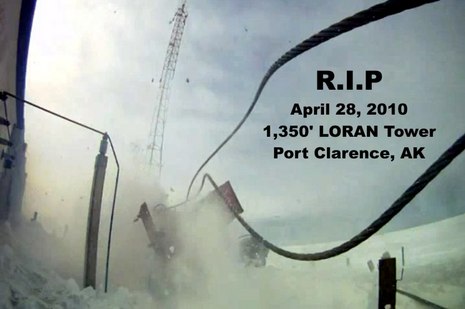 How horribly ironic!  The screen above is grabbed from a USCG video showing the demolition of Alaska’s tallest structure, a Loran tower that might have hosted an eLoran backup to GPS, maybe already was.  Just three weeks earlier, Intelsat let it be known that it had
“lost control” of one of the two WAAS satellites, and that it would “drift out
of orbit over the next two to four weeks.”  And Alaska will be the place that suffers the most loss of WAAS, though all North American navigators should take note that WAAS redundancy just went away.