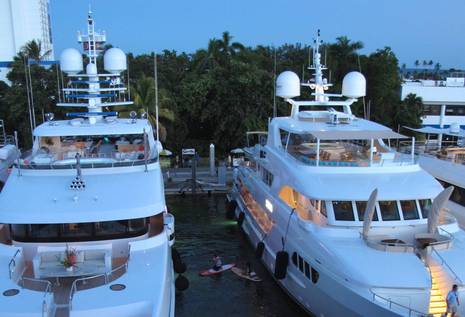 The Fort Lauderdale International Boat Show was bigger than ever this year and while FLIBS exhibits really do appeal to almost every boating persuasion, who doesn’t enjoy gawking at the very high end? Click, for instance, on the photo above and check out the remarkable farm of Furuno radars, Sea Tel satellite domes, FLIR cameras, and much more at left. The 162-foot Remember When is equipped to the max and I was not surprised to learn that proud owner John Rosatti started working on boats with his dad at age 13. Meanwhile, yours truly was higher than a megayacht on the sky deck of the odd but accessible 3,200-ton vessel doing business as SEAFAIR. Simrad was celebrating the NSO evo2 debut up here, and we all enjoyed watching the young couple on paddle boards (Remember When crew perhaps?) head off with their cooler to locations unknown. There were lots of marine electronics news in Lauderdale, but this entry will be an eclectic tour of other sights that drew my attention… 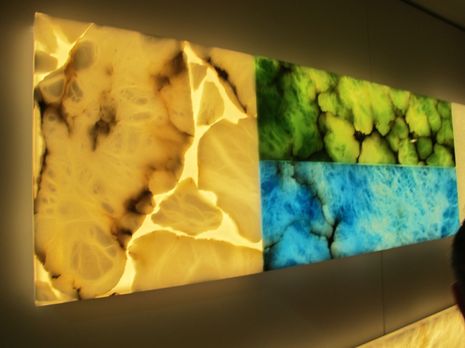 A big part of the “International” in FLIBS is the enthusiastic participation of exotic equipment manufacturers like Cantalupi. Their booth, which sometimes featured fine Italian cuisine (thanks!), was showing these sample LED-backlit panels apparently made of thin-sliced stone embedded in epoxy and quite suitable to mood lighting, say, your yacht’s master head. 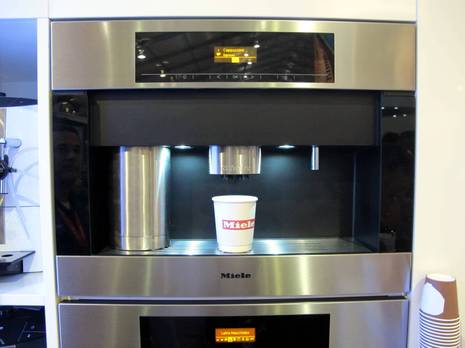 I also enjoyed a cappuccino automatically barista’d by this Miele plumbed-in-wall coffee maker, which even ground the beans and could be set up with my own custom brew profiles…if both my galley and boat budget were larger. 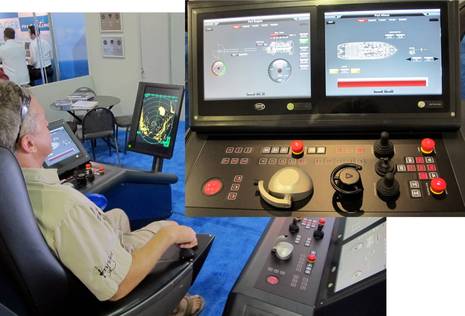 The Voyager Maritime Alliance Group works with Radio Zeeland DMP for some elements of its big yacht systems and apparently, that’s how I, too, got to sit in the extremely comfortable chair where the master of a big pushboat might control multiple azimut pod drives, deck winches, etc. “Master” has rarely seemed so appropriate a term. Not only do the trackballs have multi-color LED backlighting so they can indicate alerts and alarms (as I first saw at FLIBS years ago), but each control button can also change color to further indicate where a problem is. 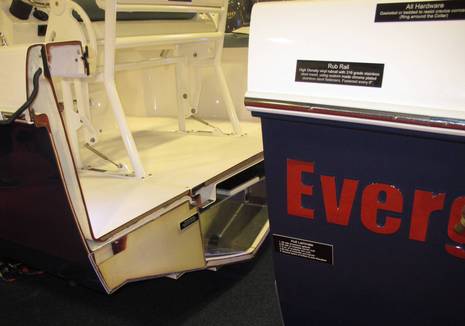 At FLIBS, the indoor boat exhibit area was so loaded with snazzy-looking center consoles that it seemed brilliant of Everglades to highlight their unsinkable and hard-to-break construction techniques by sawing a boat in three sections and carefully labeling all revealed details. 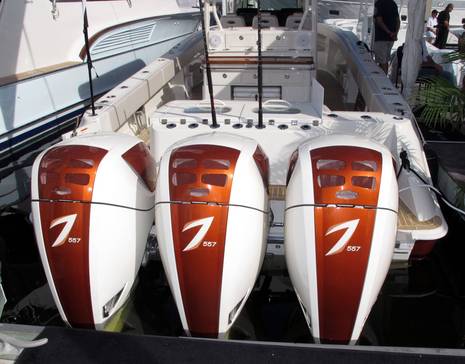 There were electric and hybrid propulsion systems in Lauderdale, but the big iron was a lot more noticeable. Like these triple Seven Marine 557s, which claim 60% more horsepower than any other outboard and even fuel efficiency (if you want to cruise really fast)… 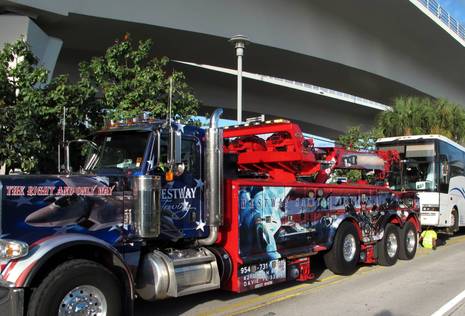 Heck, Lauderdale even has tricked out and beautifully maintained monster tow trucks, lest your shuttle bus breaks down. 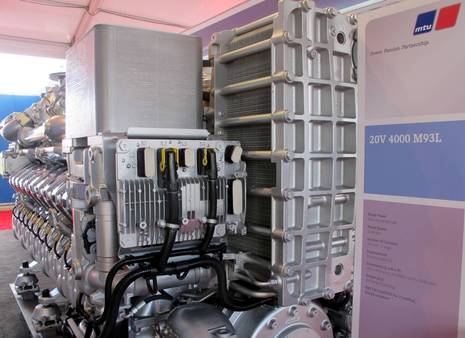 Also, hard to miss was this 20 cylinder MTU 20V 4000 M93L diesel, which isn’t even the largest in the MTU yacht line. And apparently, it only takes two 16-cylinder MTU’s to cruise the Jarrett Bay 77 below at 35 knots. Blank Check had a sold sign on when I took this shot on Saturday. It was a heck of a FLIBS. 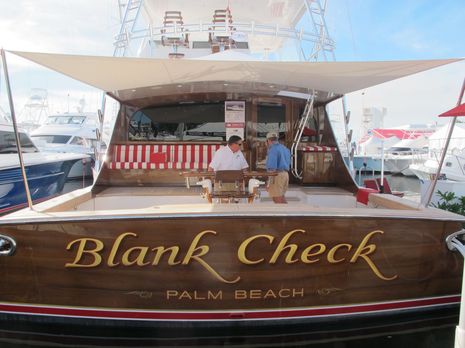